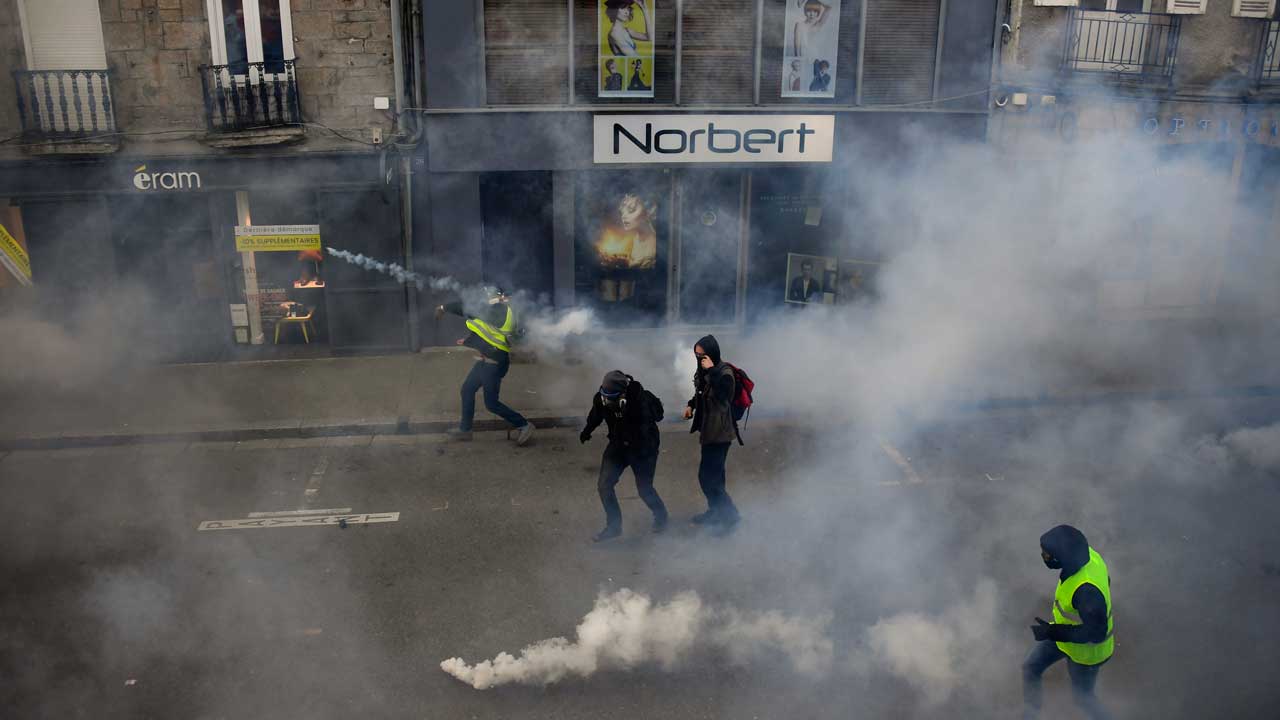 A protester throws back a tear gas canister during a “yellow vest” (gilets jaunes) anti-government demonstration in Pontivy, western France, on February 16, 2019. Demonstrators hit French city streets again on February 16, for a 14th consecutive week of nationwide protest against the French President’s policies and his top-down style of governing, high cost of living, government tax reforms and for more “social and economic justice.” The new day of protests marks three months of “yellow vest” protests as a poll now suggests that most of the country wants them to stop.Damien MEYER / AFP

French President Emmanuel Macron condemned anti-Semitic abuse of a leading intellectual by “yellow vest” protestors and said it would not be tolerated.

Police intervened to protect philosopher and writer Alain Finkielkraut after he was targeted by a group of protestors on the fringe of a demonstration in central Paris on Saturday, according to videos posted on social networks.

“The anti-Semitic insults he has been subjected to are the absolute negation of what we are and what makes us a great nation. We will not tolerate it,” Macron tweeted.

“The son of Polish immigrants who became a French academician, Alain Finkielkraut is not only a prominent man of letters but the symbol of what the Republic allows everyone,” the president added in another tweet.

Several protestors shouted “Dirty Zionist,” “We are the people” and “France is ours”, according to a video broadcast by Yahoo! News.

“I felt absolute hatred and, unfortunately, this is not the first time,” Finkielkraut, 69, told Journal du Dimanche.

“I would have been afraid if there had not been the police, fortunately they were there,” he told the newspaper, while adding that not all the demonstrators were hostile towards him and one even suggested he put on a vest and join the demonstration while another hailed his work.

Finkielkraut has expressed his solidarity and sympathy with the “yellow vest” protestors from the outset but in an interview published Saturday in Le Figaro, he criticised the leaders of the movement, saying that “arrogance has changed sides”.

Saturday’s incident triggered a wave of condemnation and messages of support for the philosopher.

Interior Minister Christophe Castaner said it was “simply intolerable” while the leader of the Republicans opposition party, Laurent Wauquiez, denounced the “abject idiots.”

Ian Brossat, chief French Communist Party candidate for the European Parliament, said “We can hate Finkielkraut’s ideas”, but “nothing can justify attacking him as a Jew”.

Finkielkraut, who is seen as having pro-establishment beliefs, has since January 2016 been a member of the French Academy, the prestigious institution in charge of defining the French language.

A recent spate of anti-Semitic vandalism and graffiti in and around Paris has stoked fresh concerns about an increase in hate crime against Jews.

The “yellow vest” protests began three months ago over fuel taxes but quickly grew into a broader anti-government rebellion fuelled by hatred of Macron, with some using anti-Semitic tropes to refer to his former job as an investment banker.