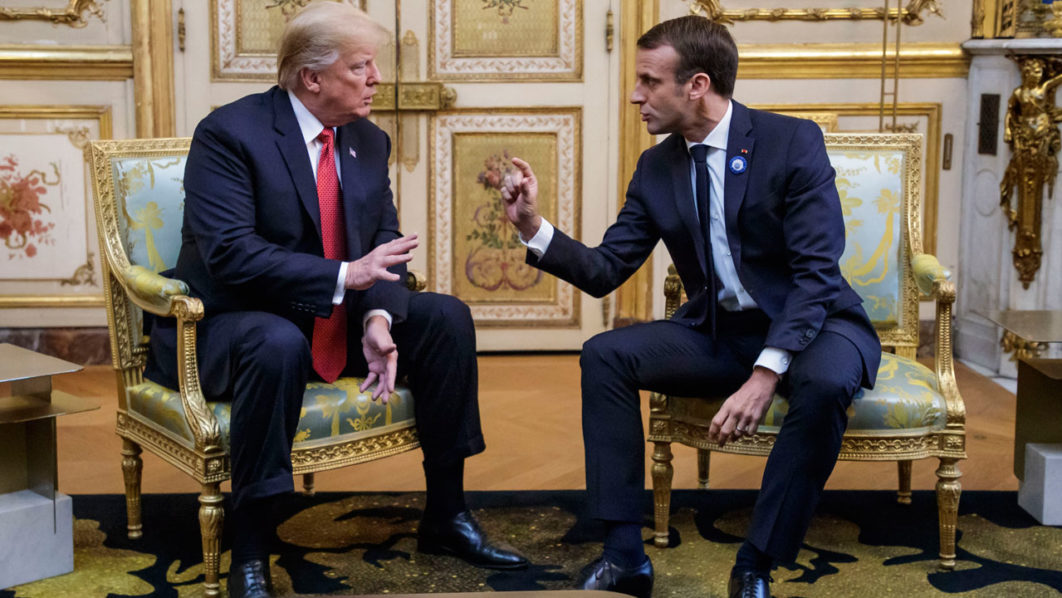 US President Donald Trump (L) speaks s with French president Emmanuel Macron prior to their meeting at the Elysee Palace in Paris, on November 10, 2018, on the sidelines of commemorations marking the 100th anniversary of the 11 November 1918 armistice, ending World War I. Christophe Petit-Tesson / POOL / AFP

US President Donald Trump met French President Emmanuel Macron for talks in Paris on Saturday ahead of a weekend of World War 1 commemorations that risk being overshadowed by a row over Macron’s calls for a European army, which Trump has branded “insulting”.

Trump and Macron shook hands on the steps of the Elysee Palace and Trump gave a thumbs-up sign before the two entered talks, during which they will attempt to defuse differences over European defence among other issues.

No sooner had Trump touched down in Paris than he fired off a tweet castigating his host over proposals to endow the EU with its own army.

“President Macron of France has just suggested that Europe build its own military in order to protect itself from the US, China and Russia,” the US president tweeted late Friday, referring to remarks made by Macron three days earlier.

“Very insulting, but perhaps Europe should first pay its fair share of NATO, which the US subsidizes greatly!,” he added.

His tweet about Macron’s EU defence proposals — which came hours before the two leaders were to hold talks at the Elysee Palace — referred to the French leader’s call in an interview Tuesday for a “real European army”.

In the radio interview, Macron said a joint European Union military force was needed to wean Europe off American might, not least after Trump announced he was pulling out of a Cold War-era nuclear treaty.

Referring also to cyber meddling in elections in the West, he said: “We have to protect ourselves with respect to China, Russia and even the United States.”

Macron’s office on Saturday acknowledged that his remarks “could create confusion” but stressed: “He never said we need a European army against the United States.”

On Saturday morning Trump was in more conciliatory form.

“I am in Paris getting ready to celebrate the end of World War One. Is there anything better to celebrate than the end of a war, in particular that one, which was one of the bloodiest and worst of all time?”, he tweeted.

The US leader and his wife Melania are on their second visit to Paris since July 2017 when Trump was Macron’s guest of honour at Bastille Day celebrations in Paris.

The row over European defence came at the start of a weekend of commemorations to be attended by 70 world leaders, including Russian President Vladimir Putin and Turkey’s Recep Tayyip Erdogan.

Bilateral talks, then lunch
After talks on issues including Syria and Iran, Macron and Trump will be joined by their spouses Melania and Brigitte for lunch.

The last time the Macrons hosted the Trumps in Paris in July 2017, during Bastille Day celebrations, they whisked them up the Eiffel Tower for a private dinner on the second floor.

The tone of this visit will be markedly less festive.

Trump is scheduled to go to two American cemeteries over the course of the weekend, which will culminate with a solemn ceremony Sunday at the Tomb of the Unknown Soldier under the Arc de Triomphe.

The isolationistUS leader has, however, ducked out of a peace conference Sunday, which Macron and Chancellor Angela Merkel intend to use as a platform for promoting multilateralism.

US National Security Advisor John Bolton told reporters in Paris on Friday the president had “a lot of pressing issues” to attend to.

Trump and Macron struck up a warm relationship initially, particularly during the US leader’s first visit to Paris, but have repeatedly clashed since over a growing list of issues, including Trump pulling America out of the 2015 Paris climate accord and the Iran nuclear deal.

Macron has repeatedly called for the EU to build up its defence capabilities in view of Trump’s demands that the EU shoulder more of the financial burden for ensuring its own security.

While a nine-country European rapid reaction force, independent from NATO, is under discussion, proposals for a full EU army with a joint command remain deeply sensitive.

Meeting in forest clearing
The WWI commemorations come at a watershed moment for the liberal post-war order, with anti-immigration populists at the helm in the US and Brazil, sharing power in Italy, and making strong gains in Germany, prompting Merkel to announce she is bowing out in 2021.

Macron met British Prime Minister Theresa May near the Belgian border Friday to try to make progress on a Brexit deal and remember the fallen on the battlefields of the Somme.

On Saturday afternoon, he will visit the northern town of Compiegne where the armistice ending World War I was signed by the Allies and Germany in a train carriage in a forest clearing on November 11, 1918.Macron will meet German Chancellor Angela Merkel at the site, in a visit symbolising the close ties between two countries that fought three wars between 1870 and 1945.