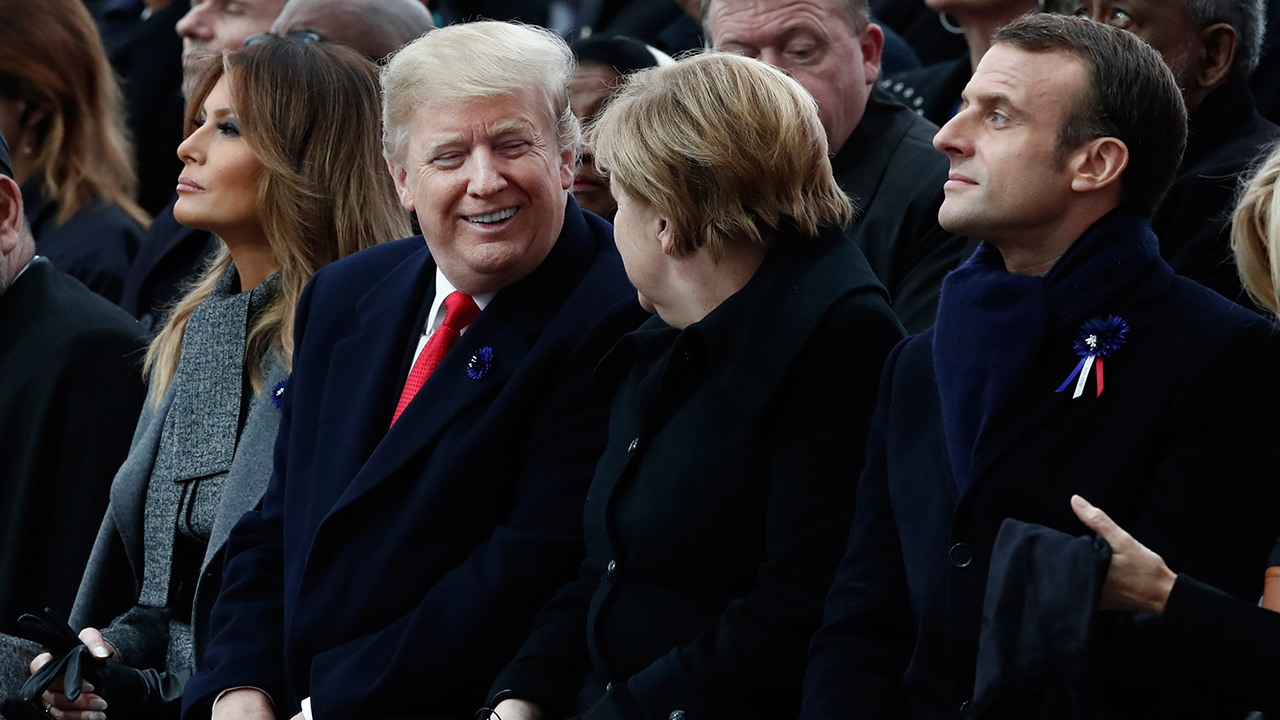 US President Donald Trump (2nd L) and German Chancellor Angela Merkel (2nd R) speak together as they are flnaked by US First Lady Melania Trump (L) and French President Emmanuel Macron (R) during a ceremony at the Arc de Triomphe in Paris on November 11, 2018 as part of commemorations marking the 100th anniversary of the 11 November 1918 armistice, ending World War I. (Photo by BENOIT TESSIER / POOL / AFP)

Europe should not spend higher defence budgets on US-made weapons, French President Emmanuel Macron said in an interview due to air Sunday, after a defence row with President Donald Trump.

One of dozens of world leaders attending World War I commemorations in France this weekend, Trump tweeted after landing in Paris that Macron’s call for a “real European army” was “insulting”.

In an interview recorded on Saturday with CNN after talks with Trump, Macron said the two leaders had spoken about what his office has portrayed as a misunderstanding.

“We had a regular discussion this morning and he confirmed in front of the press that he was ok,” Macron told CNN.

Both leaders agree there should be “better burden-sharing within NATO”, meaning Europe should be less reliant on US spending for its defence, Macron said.

But Macron told CNN: “To be very direct with you, what I don’t want to see is European countries increasing the budget in defence in order to buy American and other arms or materials coming from your industry.”

He added: “If we increase our budget, it’s to build our autonomy.”

He refrained from commenting on Trump’s “insult” tweet, beyond saying, “I always prefer having direct discussions or answering questions than making my diplomacy through tweets.”

In a radio interview this week, Macron had named the United States alongside China and Russia as sources of risk.

He said the EU needed to be less dependent on the United States, not least following Trump’s withdrawal from a Cold War-era nuclear treaty.

– ‘Cooperation is good” –
In his talks with the US leader Macron said he was merely arguing that Europe needed to take greater ownership of its own security, and Trump described the pair as “very good friends”.

Macron however told CNN that while he and Trump had things in common — notably their rise to power as outside candidates — their outlook on the world was very different.

“I’m not a nationalist, which for me is very different from being a patriot. I do defend my people, I do defend my country, I do believe we have a strong identity,” Macron said.