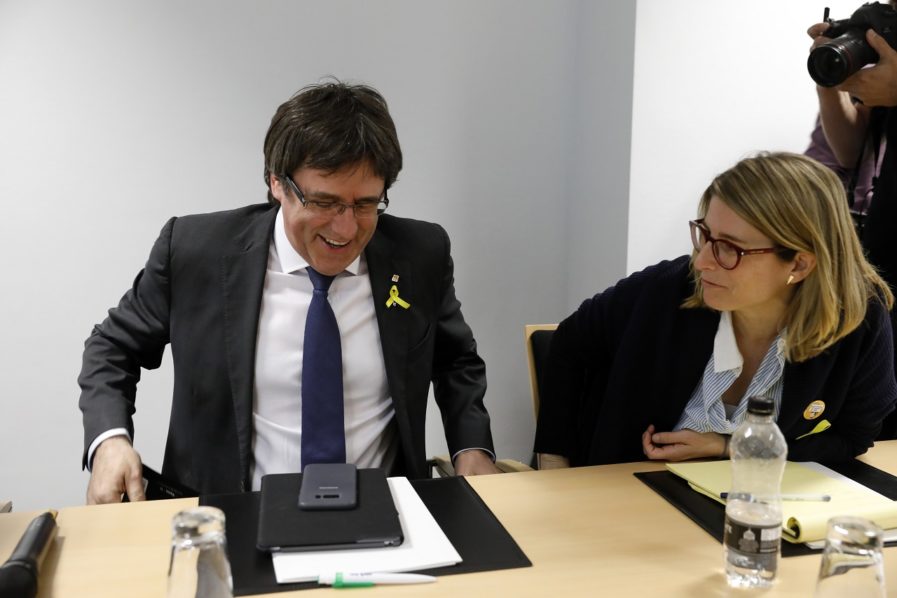 Member of the “Junts per Catalonia” (Together for Catalonia) separatist party Elsa Artadi and former Catalan president Carles Puigdemont (L) arrive for a meeting with other Catalan politicians on May 5, 2018 in Berlin. / AFP PHOTO / Odd ANDERSEN

Spain’s executive said Wednesday it would block Carles Puigdemont from being re-appointed president of Catalonia, putting pressure on the separatist camp to pick another candidate and form a regional government after months of limbo.

Madrid has requested the Constitutional Court cancel a reform voted for last week by Catalonia’s majority separatist parliament that would allow Puigdemont — currently in self-exile abroad — to be appointed president without having to be present, government spokesman Inigo Mendez de Vigo told reporters.

The court will have to examine the request and rule on it but while it does that the reform will automatically be suspended, which means Puigdemont won’t be able to be appointed as planned later this week.

Mendez de Vigo said this meant the Catalan parliament would not be able to call a session to appoint Puigdemont “at the risk of committing the offence of disobedience”.

Puigdemont’s allies had announced Saturday they would try and have him appointed by May 14.

But they also recognised that if they couldn’t, they would pick an alternative candidate to unblock the political impasse in Catalonia, which was put under direct rule by Madrid on October 27 after a failed secession bid.

That day, Rajoy also sacked Puigdemont and all his ministers after the regional parliament declared independence following a referendum that wasn’t sanctioned by Madrid and was banned by the courts.

He also called snap regional elections for December 21, which separatist parties went on to win, once again getting an absolute majority in parliament.

By then, Puigdemont had already left for Belgium in self-imposed exile.

But since then, all candidates proposed by the separatist camp to lead Catalonia have fallen flat, as they are either abroad and wanted by Spain, or already in prison, charged with rebellion.

Critics of the independence camp have charged they are merely dragging the process out to try and garner sympathy.

Speaking in the Senate on Tuesday, Rajoy slammed the separatists’ attempts to have Puigdemont re-appointed.

He accused them of “having put Catalan politics in an absurd loop in which the personal interests of one person — just one — are placed before the collective project of an entire society”.

Catalan separatists, however, say Puigdemont is their legitimate leader as his Together for Catalonia grouping was the most voted out of all separatist parties in the December elections.

They also say the rebellion charge against him and others is disproportionate, and describe those already in jail in Spain — like former Catalan vice president Oriol Junqueras — as “political prisoners”.