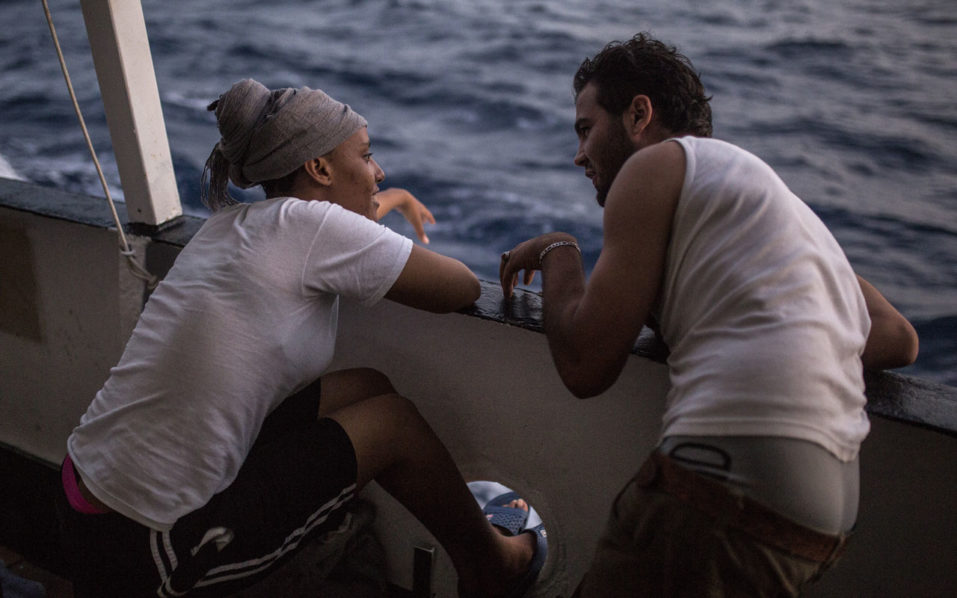 Migrants talk on the deck onboard the NGO Proactiva Open Arms boat on July 1, 2018. A Spanish NGO said on June 30 it had rescued 59 migrants as they tried to cross the Mediterranean from Libya and would dock in Barcelona in Spain after Italy and Malta refused access. The news comes a day after three babies were found dead and 100 more went missing in a shipwreck off Libya that Proactiva Open Arms, whose charity rescue boat was in the area, said could potentially have been avoided./ AFP PHOTO / Olmo Calvo

Malta on Monday stopped a second migrant rescue ship from leaving its port, as the International Organisation for Migration reported over 200 migrant deaths at sea in three days.

German charity Sea-Watch said in a statement published on its website that the Sea-Watch 3 vessel had been “detained in Malta, without any legal grounds provided by authorities”.

The decision by Malta to detain the ship comes just days after Lifeline, another charity boat, was impounded after it docked in Malta carrying over 200 migrants Wednesday.

EU leaders accuse the Lifeline of breaking international law by picking up migrants off the Libyan coast and illegally flying the Dutch flag.

On Monday, Sea-Watch said Malta was waging a “political campaign” to stop rescues at sea.

“While rescue assets are blocked in port, recent days have become the deadliest this year,” the charity warned.

The UN refugee agency UNHCR reported Friday that over 100 migrants had died, including three babies, after their boat sank off the coast of Libya.

It said that a further 63 people had gone missing Sunday when their boat capsized.

According to the International Organisation for Migration, the two incidents put the toll for deaths at sea this year at over 1,000.

Sea-Watch said that its ship was correctly registered with the Dutch authorities.

The vessel is “listed in the royal shipping register as a Dutch seagoing vessel” and is “fully entitled to fly the Dutch flag,” the charity said.

EU leaders are cracking down on charity rescue boats as the bloc grapples with how to handle the influx of people trying to reach the continent.

Several EU leaders have accused NGO ships of aiding human traffickers, saying they should let the Libyan coastguard coordinate rescue missions and take the migrants back to Libya.

But charities argue the migrants would not be safe in Libya, where they have faced abuse and rape in holding centres.