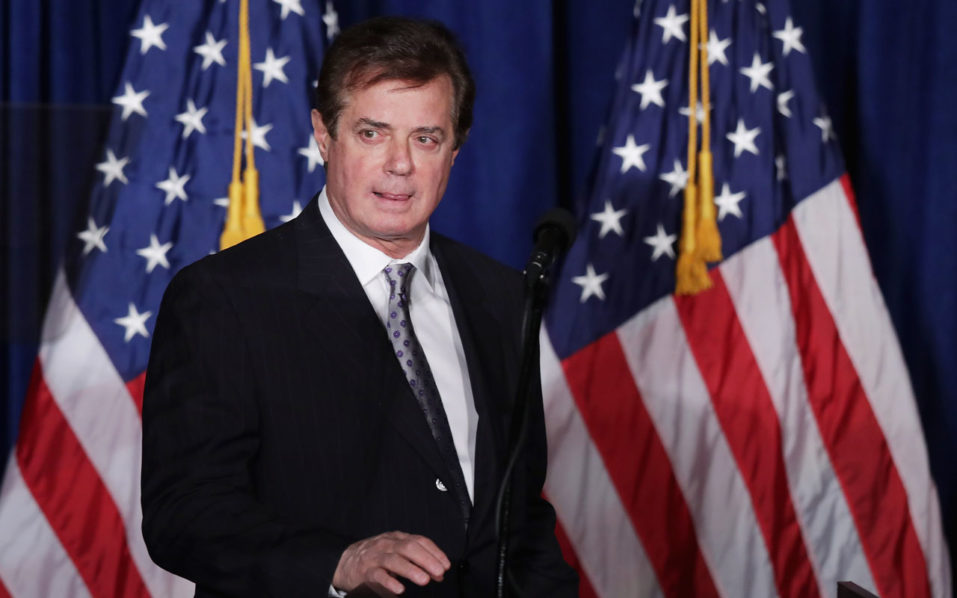 (FILES) This file photo taken on April 26, 2016 shows Paul Manafort, advisor to Republican presidential candidate Donald Trump’s campaign, checking the teleprompters before Trump’s speech at the Mayflower Hotel in Washington, DC. Paul Manafort, the embattled chairman of Donald Trump’s presidential campaign who has been under fire in connection with a Ukrainian corruption investigation, tendered his resignation on August 19, 2016. “This morning, Paul Manafort offered, and I accepted, his resignation from the campaign,” the Republican nominee said in a statement. “I am very appreciative for his great work in helping to get us where we are today,” he added./ AFP PHOTO / GETTY IMAGES NORTH AMERICA / CHIP SOMODEVILLA

Defense attorneys for Donald Trump’s former campaign chief Paul Manafort, on trial for tax and bank fraud, sought to shred the credibility of the prosecution’s key witness on Tuesday, forcing him to reveal that he had an extramarital affair and stole money from his boss.

Rick Gates, Manafort’s long-time deputy, came in for a withering cross-examination as he took the stand in a packed federal courtroom in Alexandria, Virginia.

The 46-year-old, who has pleaded guilty to conspiracy and is cooperating with the government, began the day by describing how he helped Manafort evade US taxes on millions of dollars earned from political consulting work they did in Ukraine.

Under questioning by prosecutor Greg Andres, Gates walked the six-man, six-woman jury through the foreign bank accounts used by Manafort to receive payments from Ukrainian politicians — money that was not reported to the Internal Revenue Service (IRS).

“He always had control over the accounts,” Gates said of Manafort, and the income was not reported to his bookkeepers, his accountants or the US tax authorities.

When it was his turn to question Gates, defense attorney Kevin Downing went on the offensive, pressing him on what amount of time he would have expected to face in prison had he not agreed to cooperate with the government.

Gates conceded it was “in excess of 50 to 100 years,” but said any eventual sentence — including avoiding jail by receiving probation — would be up to a judge.

Downing forced Gates to admit he had stolen hundreds of thousands of dollars from Manafort by filing bogus personal expenses claims and that he had engaged in an extramarital affair and kept an apartment in London for that purpose.

“Were these payments for your secret life?” Downing asked.

“I acknowledge I had a period of time when I had another relationship,” said Gates, who is married and has four children. “I already admitted on the record that I took unauthorized funds from Mr Manafort.”

Manafort, seated at the defense table, stared intently at Gates while his defense attorney hammered him with aggressive questions, but his former business partner carefully avoided his gaze.

“After all the lies you’ve told, and the fraud you’ve committed, you expect the jury will believe you?” Downing asked Gates.

Gates appeared to be referring to his decision to enter into a plea agreement with the office of Special Counsel Robert Mueller in exchange for his trial testimony.

Income as loans
Manafort, 69, is the first defendant to go to court to fight charges stemming from Mueller’s investigation into Russian interference in the 2016 presidential election.

The veteran Republican operative is not on trial for anything he did while serving for three months in 2016 as chairman of Trump’s presidential campaign.

Instead, Manafort is charged with evading taxes and bank fraud related to the money he made providing political consulting services in Ukraine.

While Gates and others have pleaded guilty, Manafort has refused to strike a deal and legal experts say he may be holding out hopes of a pardon from Trump.

Gates was hired by Manafort to serve as deputy campaign chairman and later had a role on Trump’s inaugural committee.

Earlier Tuesday, Gates told the court that Manafort would frequently pay for clothing, landscaping and other personal expenses using wire transfers directly from his bank accounts in Cyprus and others in St. Vincent and the Grenadines.

Gates also said that when their political work in Ukraine dried up in 2015, Manafort had difficulty paying his bills and had no other clients at that time.

He also said Manafort had asked him to disguise income as loans.

Manafort, who helped Republicans Gerald Ford and Ronald Reagan reach the White House, was Trump’s campaign chairman from May to August 2016.

He was forced to step down amid questions about his lobbying work for Ukraine’s former pro-Russian leader Viktor Yanukovych.

Mueller, a former FBI director, has indicted more than 30 people — including 26 Russians — in connection with his probe into whether members of Trump’s campaign colluded with Russia to help get the real estate tycoon elected.

Trump has denounced the probe as a politically motivated “witch hunt” and denied there was any collusion with Moscow to defeat Democrat Hillary Clinton.