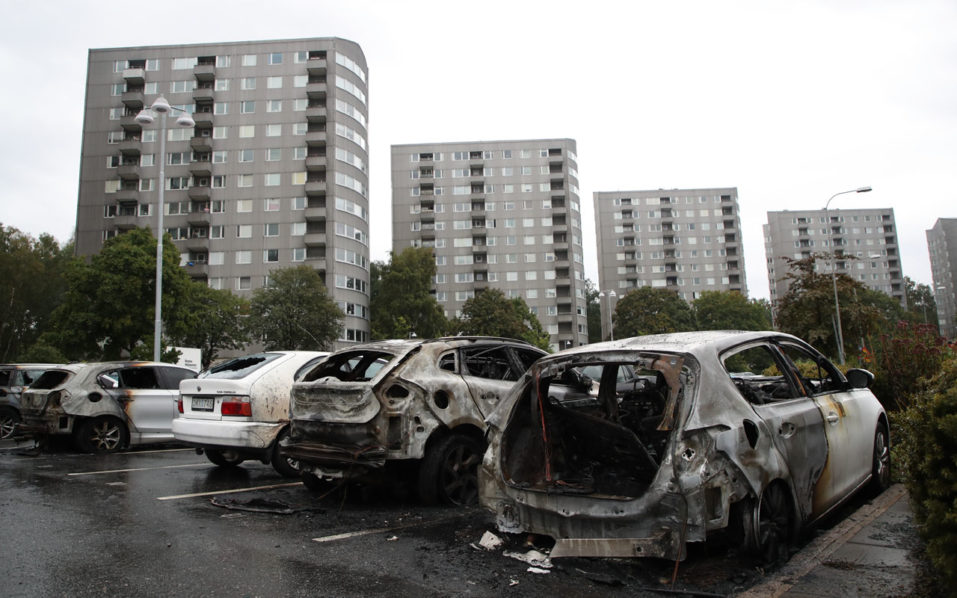 Burned cars are pictured at Froelunda Square in Gothenburg, Sweden on August 14, 2018. Up to 80 cars have been set on fire in western Sweden by masked vandals, police said on August 14, 2018, in what was described as organised crime weeks before the general election. Most of the cars were burned in Sweden’s second largest city of Gothenburg where emergency services were dispatched to around 20 locations on late Monday, according to media reports./ AFP PHOTO / TT News Agency / Adam IHSE / Sweden OUT

Up to 80 cars were set on fire overnight across western Sweden by masked vandals, police said Tuesday, in what they suspect was a coordinated attack weeks before a general election.

Most of the cars were burned at around 20 locations in Sweden’s second largest city of Gothenburg late Monday.

Authorities said no suspects have been arrested so far and no motive has been established.

But police said they had identified several people in connection with the blazes, which they believe were organised on social media.

The incident triggered outrage among Swedish politicians who are busy campaigning for the September 9 general election.

“I’m furious. My question to (the perpetrators) is: what the hell are you doing?” Social Democratic Prime Minister Stefan Lofven told public broadcaster Swedish Radio on Tuesday.

“You’re ruining things for yourselves, your parents and your neighbourhoods,” Lofven said, adding the incident “looked very coordinated, almost like a military operation”.

Last year, 1,457 cars were “deliberately” set on fire across Sweden, compared to 1,641 in 2016, according to the Swedish Civil Contingencies Agency’s figures.

“Sweden has tolerated this for too long. This must end now,” Ulf Kristersson, leader of the conservative opposition party, the Moderates, wrote on his Facebook account.

Last year in February, two days after US President Donald Trump’s baffling comments linking crime to immigration in Sweden, riots broke out in the immigrant-heavy northern Stockholm suburb of Rinkeby.

Dozens of youths clashed with police after they arrested a suspected drug dealer in Rinkeby. The rioters threw stones at police, burned cars and looted shops.