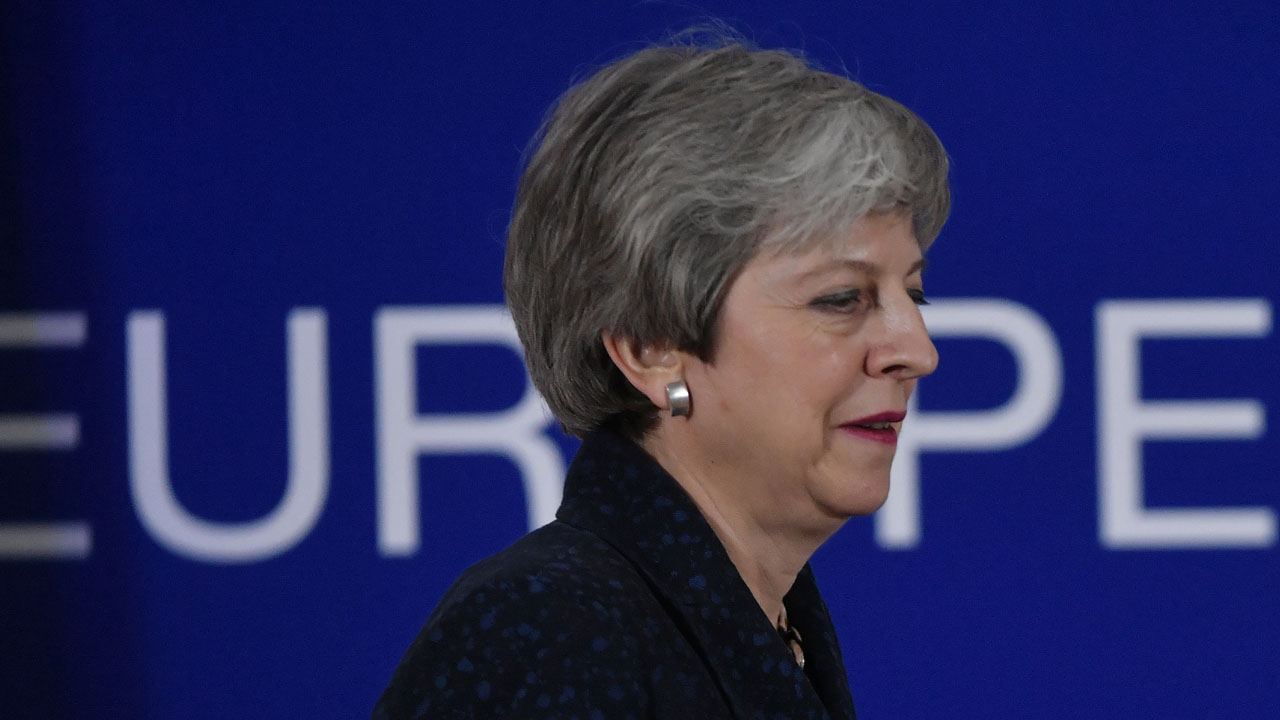 British Prime Minister Theresa May arrives to a press conference on March 22, 2019, on the first day of an EU summit focused on Brexit, in Brussels. – European Union leaders meet in Brussels on March 21 and 22, for the last EU summit before Britain’s scheduled exit of the union. (Photo by Emmanuel DUNAND / AFP)

British Prime Minister Theresa May huddled with her ministers on Friday as she plotted a renewed bid to convince MPs to back her EU divorce deal after securing a delay to Brexit from European leaders in Brussels.

The premier faces daunting odds to persuade British lawmakers to support a plan they have already overwhelmingly rejected twice by a new April 12 deadline agreed with the European Union.

If May succeeds, Britain — which was staring at a cliff-edge deadline of March 29 for leaving the EU — will depart on May 22 under the terms of a withdrawal agreement struck with the EU last year.

But if MPs defeat the accord again next week Brexit will go ahead on April 12, unless London decides to request another extension.

A further extension would require Britain to take part in elections for the European Parliament in May despite having voted three years ago to leave the bloc.

“Until April 12, anything is possible,” EU Council President Donald Tusk told reporters on Friday at the close of the EU summit in Brussels.

German Chancellor Angela Merkel said the bloc’s leaders would need another summit with May to discuss how to proceed if MPs reject the agreement again.

“I will make every effort to ensure that we are able to leave with a deal and move our country forward,” May said on Thursday.

The pound rose on news of the delay but is likely to remain volatile amid uncertainty over what path Britain will now take.

Parliament has been deadlocked for months over Brexit, with lawmakers unable to decide how to implement the 2016 referendum result, reflecting bitter divisions in the country as a whole.

‘Short periods of time’
Tusk said four options were possible: a deal, a long extension “if the UK decided to rethink its strategy”, a no-deal exit or revoking Article 50 — the formal procedure for member states to leave the EU.

He said April 12 is now a “key date” — because after that Britain could no longer register candidates for the European Parliament elections.

“If it has not decided to do so by then, the option of a long extension will automatically become impossible,” Tusk said.

The British government declined Friday to set a date for a third parliamentary vote on the divorce deal but said it hoped it would happen next week.

She faces an immediate hurdle in the form of parliamentary speaker John Bercow. He has said the agreement being voted on has to be on different terms from the ones MPs have already rejected.

There was also heightened speculation that May is increasingly open to a series of so-called “indicative votes” that could show what option parliament prefers.

“In the event of the House (of Commons) voting down the meaningful vote, it would not be unreasonable to have subsequent votes to find out what the House actually supported,” junior Brexit minister Kwasi Kwarteng told MPs.

But the prospect of such votes — potentially on everything from stopping Brexit altogether to remaining in a customs union with the EU — prompted criticism from Brexit hardliners.

“National humiliation is imminent through these ‘indicative votes’,” said Conservative MP Steve Baker, who favours leaving without a deal.

– ‘Disgusted’ –
Earlier, a range of lawmakers had signalled their continuing opposition to May’s plan, while others focused their fury on the agreed delay.

Conservative MP Peter Bone told the BBC: “If a deal is a bad deal, it’s a bad deal, and I’m not going to vote for it.”

Nigel Farage, one of the driving forces behind the Brexit campaign, said he was “disgusted”.

Conservative-leaning newspapers also reported growing opposition to May remaining in power over her handling of Brexit.

The reports said the prime minister had lost the support of her chief whip Julian Smith. He was reportedly furious at her statements Wednesday castigating MPs he is trying to win over to her deal.

As uncertainty continues to reign, more than three million people have signed an online petition calling on the government to cancel Brexit.

A poll published on Friday found that around four in 10 adults in Britain have been left feeling powerless, angry or worried by Brexit over the past year.