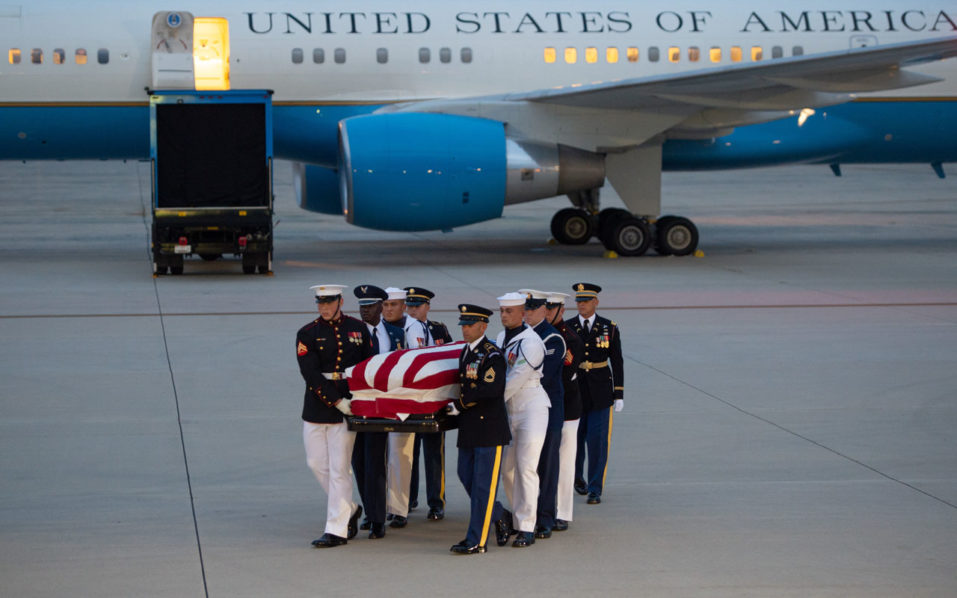 The flag-draped casket of the late US Senator John McCain, Republican of Arizona, arrives on a military airplane at Joint Base Andrews in Maryland, on August 30, 2018. / AFP PHOTO / SAUL LOEB

Americans prepared Friday to honor the late national icon John McCain, whose remains were to lay in state in the US Capitol as part of a momentous sendoff for the warrior-turned-politician.

Hundreds of members of Congress, including his 99 Senate colleagues, are expected to attend the ceremony, a somber Capitol Rotunda honor that has been accorded to just 30 Americans throughout the nation’s history.

McCain’s final visit to Washington, where he served in Congress for 35 years, will take place over two days.

It includes a memorial service Saturday during which former presidents George W. Bush and Barack Obama — a Republican and Democrat who each ended McCain’s White House dreams — will deliver remarks.

The former aviator who spent more than five years as a prisoner of war in Vietnam, and returned home to launch a respected political career that saw him win the Republican presidential nomination in 2008, will be buried Sunday at the US Naval Academy in nearby Annapolis, Maryland.

On Friday just before 11:00 am (1500 GMT), his coffin will be escorted into the Rotunda and placed on a wooden platform known as a catafalque, first used in 1865 to bear the casket of assassinated president Abraham Lincoln.

“John McCain was a giant of our time — not just for the things he achieved, but for who he was and what he fought for all his life,” House Speaker Paul Ryan said Thursday.

McCain “was a patriot and was in service to our country his entire life. We’re going to miss him,” tweeted Senator Bob Corker, who like McCain has been an occasional critic of President Donald Trump.

The funeral services for McCain, who for months planned his farewell before he died Saturday at age 81 after a yearlong battle with cancer, is seen by many as a thinly veiled rebuke of Trump, whose open disdain for McCain has alarmed many.

Their bitter feud took root during Trump’s 2016 campaign, when he said McCain was not a war hero.

The billionaire leader was not invited to the funeral or burial, and he is not scheduled to appear Friday in the Rotunda, where McCain’s flag-draped coffin will be brought in by an honor guard.

McCain’s widow Cindy and seven children, along with his 106-year-old mother Roberta McCain, will be present, along with his staff, state governors, diplomats and other dignitaries.

‘Fairness, honesty, dignity’
McCain’s remains were flown by military aircraft to Washington on Thursday from Arizona, which he has represented in Congress since his first election in 1982.

Democratic former Vice President Joe Biden delivered a stirring eulogy of his friend at a memorial ceremony in Phoenix, describing Arizona’s adopted son as a “brother” and a “giant” whose belief in the soul of America helped give citizens their confidence and optimism.

Biden’s words appeared at times aimed at striking a stark contrast between his former Senate colleague’s integrity and conciliation and the state of political division that has been exacerbated under Trump.

Biden spoke of the values of “fairness, honesty, dignity, respect, giving hate no safe harbor, leaving no one behind and understanding that as Americans, we’re part of something much bigger than ourselves.”

Similar themes likely will be addressed when Pence, Ryan and Senate Majority Leader Mitch McConnell deliver remarks in the Rotunda.