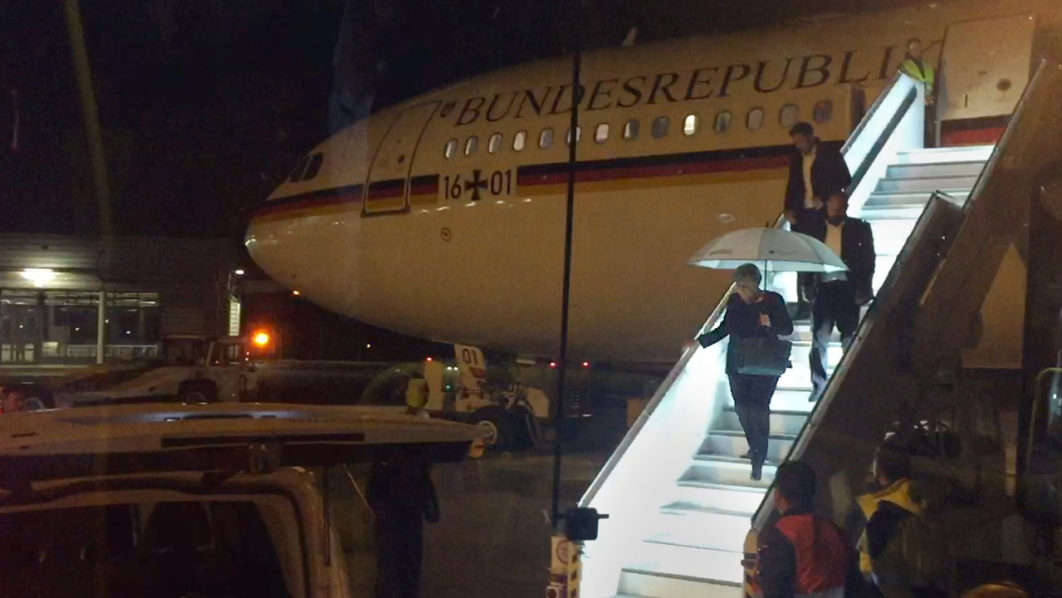 German Chancellor Angela Merkel steps down from Airbus “Konrad Adenauer” on late November 29, 2018 on the tarmac of Cologne’s airport after an emergency landing. – German Chancellor Angela Merkel will miss the opening of the G20 summit in Argentina after the government Airbus A340-300 was forced to make an unscheduled landing in Cologne shortly after leaving Berlin. (Photo by Jörg BLANK / dpa / AFP) / Germany OUT

Germany’s air force said Friday a serious technical problem on Chancellor Angela Merkel’s plane had forced an emergency landing and delayed her arrival at the G20 summit by more than 12 hours.

The pilot had to use a satellite phone after the malfunction knocked out radio communications, including a backup system, as he prepared the unscheduled landing in Cologne.

The latest embarrassing glitch for the German military forced Merkel to instead take a commercial flight from Madrid to Buenos Aires with a vastly reduced delegation and miss scheduled talks with several world leaders.

Merkel was due to arrive late for the traditional G20 “family photo” of heads of state and government, and it was unclear whether she could reschedule planned talks with US President Donald Trump and China’s Xi Jinping.

Shortly after takeoff from Berlin on Thursday evening, Merkel’s Airbus A340-300 was forced to turn back over Dutch airspace and divert toward the German city of Cologne, the headquarters of the government fleet.

The glitch also disabled the mechanism for dumping fuel, meaning the plane was heavy with a full tank and had to brake hard on landing, with fire engines standing by on the runway.

“It was a serious malfunction,” Merkel told reporters travelling with her aboard the “Konrad Adenauer”, a former Lufthansa airlines jet built in 1999 and named after post-war Germany’s first chancellor.

Merkel’s spokeswoman later stressed that there was never any “danger to life and limb” of those aboard.

Failure of ‘single component’
The German air force on Friday ruled out sabotage through hacking or other means, with a spokesman saying that “there is absolutely no indication of a criminal act”.

The cause of the troubles was “the failure of a single component”, an electronic distributor box, said Colonel Guido Henrich, commander of the government air fleet.

Merkel had to spend the night in a hotel in nearby Bonn because no replacement plane with crew was immediately available.

Early Friday, after just three hours of sleep, she was taken by a German air force plane to Madrid.

From here, instead of flying her usual Airbus jet with bedroom suite, secure communications and an anti-missile system, she and her trimmed down entourage boarded an Iberia plane for the flight across the Atlantic.

She was due to arrive in Buenos Aires at around 2100 GMT — without her husband Joachim Sauer, who after the plane troubles opted to skip the event.

A back-up government plane was meanwhile being sent to Argentina for Merkel’s return flight.

Rats, faults and intruders
For the German Luftwaffe it was the latest in a string of mishaps to make headlines in recent years.

In October, Finance Minister Olaf Scholz had to take a commercial flight home from a summit in Bali, Indonesia after rats had chewed through cables of the Konrad Adenauer, disabling the aircraft for days.

In June, problems with the hydraulics system on the same plane forced President Frank-Walter Steinmeier to take an alternative aircraft to Minsk.

And in 2015, technical problems with the Konrad Adenauer forced Merkel and five ministers to make a flight to India on a A310 military troop transporter.

In a bizarre incident involving Merkel’s official plane in 2013, a 24-year-old intruder high on drugs and wearing just underpants managed to get aboard the parked jet in Cologne and stage what media termed “a one-man party” before he was arrested.

The German armed forces, which complains of being overstretched and underfunded, has long been dogged by a series of equipment failures that have also grounded fighter jets and kept submarines and tanks out of service.

Its G36 assault rifle had trouble firing straight at high temperatures and is being phased out.

Last year Defence Minister Ursula von der Leyen took an Airbus A400M to Lithuania to show off the new transport aircraft, but engine trouble grounded it and forced her to return home on a decades-old Transall C-160 transporter.