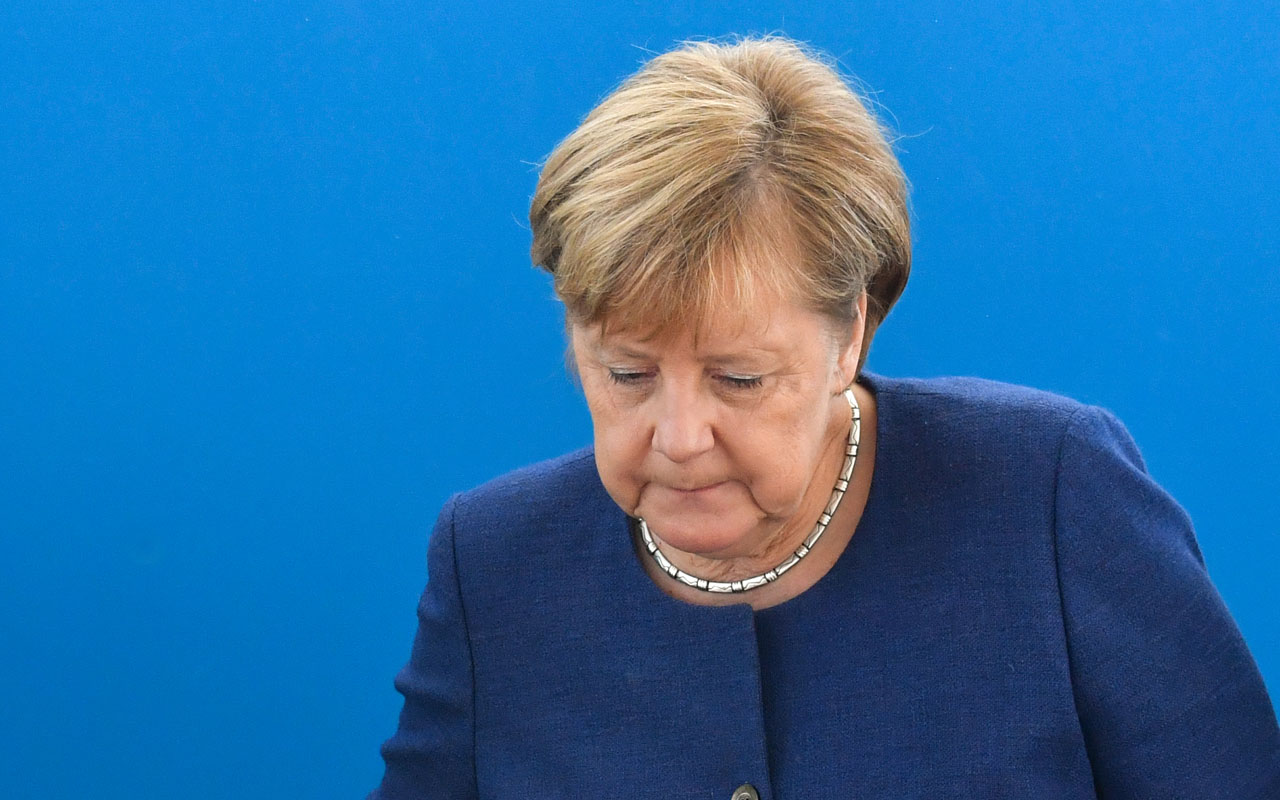 German Chancellor and leader of the Christian Democratic Union (CDU) Angela Merkel arrives for a leadership meeting of the CDU party at their headquarters in Berlin, on October 15, 2018. – German Chancellor Angela Merkel’s conservative CSU allies suffered historic losses in Bavaria state elections on October 14, 2018, dealing a blow to her fragile three-party coalition government. The Christian Social Union (CSU) scored 37 percent, a steep 10-point drop from four years ago in the wealthy Alpine state it has ruled almost single-handedly since the 1960s. (Photo by John MACDOUGALL / AFP)

German Chancellor Angela Merkel vowed Monday to “win back trust” from voters after squabbling within her three-party coalition was blamed for severe election losses in the state of Bavaria.

Looking back at a turbulent year since 2017 general elections, which saw painful coalition talks followed by harsh infighting on immigration, she conceded that “a lot of trusts has been lost”.

Her lesson from Sunday’s Bavaria polls, where her governing partners the CSU and the SPD suffered heavy losses, was that “I as the chancellor must do more to ensure that this trust is there”.

Her own Christian Democrats (CDU) and their Bavarian sister party the CSU “can be expected to act in a united way,” she said, pointing to her deep rift with the CSU’s hardline Interior Minister Horst Seehofer.

The governing parties were in shell-shock after Sunday’s regional election, where the CSU took a 10-point dive to 37 percent, losing its absolute majority in the Alpine state it has ruled since the 1960s.

Merkel’s other national coalition partner, the centre-left Social Democrats (SPD), dropped to 9.7 percent, halving their support in their worst-ever result in any state poll.

The far-right Alternative for Germany (AfD), which has railed against Merkel’s 2015 decision to keep open German borders to a mass influx of refugees and migrants, scored 10 percent.

Their success was cheered by right-wing leaders including Marine Le Pen of France and Italy’s Matteo Salvini, who said that “in Bavaria, change has won”.

The AfD’s Alice Weidel jubilantly declared that Merkel’s government “is not a grand coalition but a mini-coalition” and demanded she “clear the way for new elections”.

“The Bavaria election has made an early end to the GroKo much more likely,” it said.

“Two of three partners in the GroKo have suffered brutal losses. The third, Angela Merkel’s CDU, fears the consequences.”

Shattered certainties
The Bavaria poll result shattered old certainties for the CSU, which has ruled almost single-handedly for decades in the southern state known for its fairytale castles, Oktoberfest and crucifixes on classroom walls.

Since the mass migrant arrivals, in which Bavaria was Germany’s frontline state, the CSU has adopted far tougher anti-immigration and law and order positions.

Nonetheless, they and other big parties took heavy losses in 2017 federal elections to the AfD, which became the first right-wing extremist party to enter the German parliament in significant numbers.

The CSU’s Seehofer has harshly criticised Merkel and the SPD over their more liberal stance on immigration, twice bringing their alliance to the brink of collapse.

The political battles, one centred on securing German borders against asylum seekers, have distracted Merkel’s fourth-term government and angered voters.

After Sunday’s election, Seehofer, 69, insisted he would stay on as a minister, even as a poll for news weekly Focus said 46 percent of Germans blame him and his brinkmanship for the CSU’s historically-poor result.

Merkel’s ‘litmus test’
The Sueddeutsche Zeitung daily said, following what it labelled a new milestone in the decline of German mainstream parties, Merkel’s coalition now has a stark choice: a return to “common sense, or new elections”.

The SPD’s deputy leader Ralf Stegner told Phoenix TV that “the citizens delivered a resounding slap” to the governing parties and that, unless they change, “the grand coalition won’t last much longer”.

In Berlin, the GroKo leaders are now nervously looking ahead to another landmark regional vote at the end of the month.

Voters go to the polls on October 28 in central Hesse state, home to the financial hub Frankfurt, where polls say Merkel ally Volker Bouffier will face an uphill battle to stay on as the state premier.

Die Welt daily said the regional vote will be “the litmus test” for Merkel, who is running for re-election as CDU party chief in December, stressing that “Merkel’s future could be decided in Hesse”.