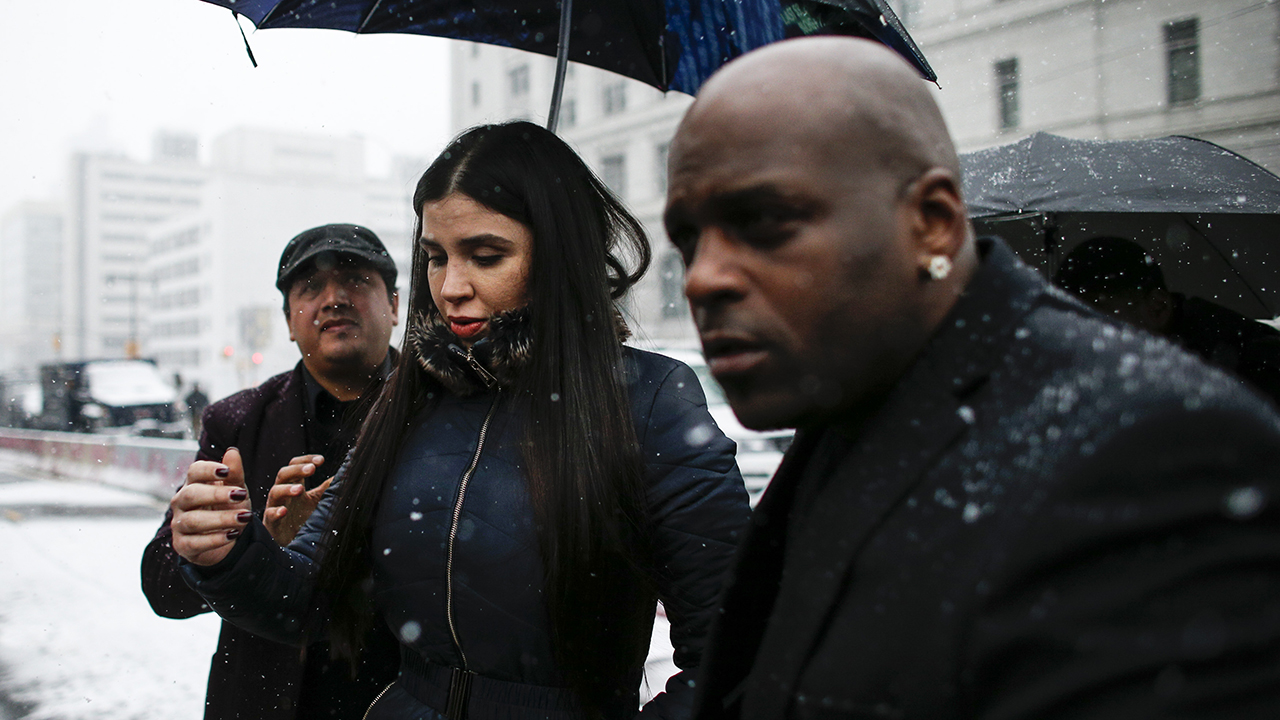 Emma Coronel Aispuro,(C) wife of Joaquin ‘El Chapo’ Guzman arrives at the US Federal Courthouse while the trial for Joaquin ‘El Chapo’ Guzman takes place on February 12, 2019 in Brooklyn, New York. – A New York jury is deliberating the fate of Guzman after a three month drug trial that laid bare the loves, schemes and escapes of Mexico’s most famous drug lord. (Photo by Kena Betancur / AFP)

Mexican mobster Joaquin “El Chapo” Guzman was found guilty Tuesday by a New York jury of crimes spanning a quarter of a century as head of one of the world’s most powerful drugs gangs.

The 61-year-old former head of the Sinaloa cartel — famed for his brazen escapes from Mexican prisons — faces a possible life sentence after being convicted of smuggling tons of cocaine, heroin, methamphetamine and marijuana into the United States.

He was also found guilty of money laundering and illegal weapons possession charges.

In a three-month trial that unfolded like a real-life telenovela, Guzman’s former beauty queen wife and a parade of his lovers and henchmen took the witness stand under the gaze of the onetime drugs kingpin.

In his closing arguments late last month, Guzman’s lawyer Jeffrey Lichtman asked the jury not to convict on the basis of the “garbage” testimony of government witnesses.

Lichtman contended that Guzman was merely a “scapegoat,” and that the real culprit in the drug trafficking operations was Ismael “El Mayo” Zambada, the co-founder of the Sinaloa cartel.

“Mayo has been the largest narcotrafficker for decades in Mexico. He has never been arrested. He has paid hundreds of millions of dollars to stay free,” Lichtman said.

The government, meanwhile, appealed to the jury not to let Guzman escape — an allusion to his two spectacular jail breaks in Mexico, the last one in 2015 through a tunnel from a shower area in his cell.

“Do not let him escape responsibility. Hold him accountable for his crimes. Find him guilty on all counts,” US assistant attorney Andrea Goldbarg said in her closing arguments.

During the trial, the government presented 56 witnesses and troves of incriminating material, including intercepted calls between Guzman and his associates, and conservations taped secretly by informants, over a period stretching almost three months.

The defense called just one witness, an FBI agent put on the stand in an attempt to undermine the credibility of one of Guzman’s cocaine suppliers who had testified against him.

The defense’s strategy centered on attacking the credibility of the cooperating witnesses — former secretaries, pilots, cocaine suppliers, Guzman’s top trafficker in the United States, a manager, an accountant, a former communications chief, and even a former lover.

Most are serving prison sentences and hoped to have their penalties reduced in return for their cooperation with prosecutors.

“Those witnesses not only admitted to lying every day of their lives, their miserable, selfish lives — they lied to you here in the courtroom,” Lichtman said.