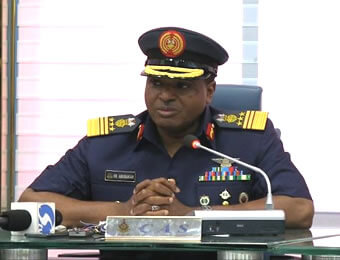 The Chief of the Air Staff, Air Marshal Sadique Abubakar has said that the military is being guided by the “Law of Armed Conflict (LOAC)’’ in operations during armed hostilities in the country.

Abubakar stated this on Tuesday in Abuja at the 2019 edition of the Armed Conflict Retreat for Nigerian Air Force Legal officers and Field Commanders.

He, therefore, explained that the retreat was aimed at providing NAF legal officers with the opportunity to interact and meet with their colleagues outside the service.

“It is pertinent to state that we are particularly guided by LOAC, which forms part of both domestic and international humanitarian laws that regulate the conduct of armed hostilities.

“LOAC covers overlapping areas which are the Hague Rule, Geneva Law, as well as the two additional protocols of 1977.

“In carrying out our tasks, we focus on the features of the protocols.

“These features borders on forbidden targets, tactics and techniques, enemy captives and detainees, civilians and private properties, and prevention of crime in theatres of war,’’ Abubakar said.

He said the protocols were designed to protect defenceless people and property that were not connected with hostilities.

“They dictate that captives are humanely treated and forbid reprisal actions/revenge, as well as the use of coercion in interview or interrogation.

“More so, they forbid looting and wanton destruction of property and use of humans as shields.

“Similarly, the protocols prohibit the destruction of property and inhuman treatment of civilians,” he said.

Abubakar said in line with the protocols, the service ensures that its commanders respect and honour natives, their families, faith as well as customs.

“Our field commander also ensure adequately coordinated movement of persons to avoid making them casualties in theatres of operation, while also protecting private property from arson, looting and theft.

“In addition, we ensure that commanders and troops do not partake in illegalities when deployed on operations.

“As a service, we know that the violation of LOAC is a breach of both international laws and laws of Nigeria; as such we always endeavour to operate within its confine.’’

He urged the participants to take advantage of the retreat to address issues associated with violation of human rights, adherence to LOAC in the ongoing operations.

Earlier, the Acting Chief Justice of Nigeria (CJN), Justice Ibrahim Mohammed expressed happiness to be part of the occasion.

He said: “for me, nothing is more important than acting within the ambit of the laws in whichever role you find yourself.

“The Nigerian Air Force and indeed the whole armed forces were established to serve and be accountable to the Nigerian people and one way to do this in the business of defence is to adhere to your Rules of Engagement in line with the laws as well as international best practices.

“As such our troops must adhere to the laws of armed conflict during military operations.’’

The CJN said Nigerian appreciate the sacrifices the military had been making to keep the country united.

“Our thought go to our service men, who have paid the ultimate price in this process, their sacrifices will never go in vain

“I want to assure you that the judiciary will continue to work with you to advance the course of justice and fairness as a means of ensuring success in your operations,’’ the CJN said.