You are here
Home > FG > Minimum wage row gets messier 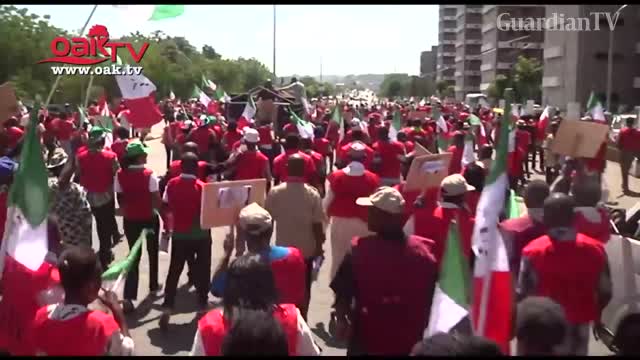 Prospects of a quick fix to the impasse over a new minimum wage dimmed yesterday as the Federal Government headed to court to stop the planned strike by organised labour.

The government approached the National Industrial Court (NIC) to prevent labour from embarking on its Tuesday, November 6, 2018, industrial action.

The Guardian learnt that an ex-parte motion tagged, ‘FGN & Attorney-General vs. NLC and TUC’ was filed at a court in Abuja.

But reacting to the development, Deputy President of the Nigeria Labour Congress (NLC) Peters Adeyemi said the judicial option proves government’s determination to shortchange Nigerian workers and an unwillingness to embrace dialogue. He appealed to the judiciary not to allow itself be used against the people.

“I don’t think that is sufficient to stop the protest because it is the right of Nigerians to protest and this right is guaranteed by the Nigerian constitution which is supreme to any other law of the land,” Adeyemi said.

But labour earlier yesterday also dug its trench deeper, indicating it would not be the first to blink.

Following Tuesday’s resolve by state governors to pay N22,500, instead of the N30,000 it is demanding, labour vexatiously returned to its pre-tripartite negotiation stance of N66,500.

“Since the government, which is a major stakeholder in the tripartite committee has reneged on the agreement repudiating its earlier documented offer, the union, in conjunction with other labour centres, rejects the N30,000 compromise figure of the tripartite committee and now insists on our original collective demand of N66,500 as an irreducible minimum.

The only figure that we now recognise is N66,500 or nothing else.

This shall be the focus of our demand as we move into the nationwide strike on Tuesday, November 6, 2018,” said Mr. Joe Ajaero, President of the United Labour Congress (ULC).

NLC President Ayuba Wabba described the President Muhammadu Buhari-led government as the worst in the handling of labour relations in the country.

The government, according to him, has scored three ignoble achievements: the first in the history of Nigeria to jerk up the pump price of petrol by almost 70 per cent without a cushioning offer to the populace; the first to leave the determination of national minimum wage for state governments; and the first to preside over the longest minimum wage negotiation.

He said N30,000 was not labour’s figure but a sum that was reached by the tripartite committee in a spirit of give and take. “It is the compromise figure arrived at after negotiations by the tripartite partners – government, employers and organised labour. The new minimum wage was a product of intense negotiations that lasted for almost one year,” he explained.

The NLC boss said the unilateral pronouncement by the governors is an abuse of the principle of industrial relations, labour laws, processes and international best practices.

He condemned government officials for earning the highest emoluments on the continent while constituting less than one per cent of the entire population.

This came as the Nigeria Employers’ Consultative Association (NECA) dissociated itself from a statement credited to the Nigeria Chamber of Commerce, Industry, Mines and Agriculture (NACCIMA), suggesting the tripartite committee did not agree on N30,000 as new minimum wage.

The organised labour in Zamfara meanwhile has declared total support for the nationwide strike.

The state NLC chairman, Mr. Bashir Mafara, told reporters in Gusau: “Our stand remains the same with that of the national body. We do not receive directives from governors, so the governors’ resolution has nothing to do with our position.”

Marafa regretted that some workers in the state were yet to benefit from the former N18,000 minimum wage despite the fact that the state governor, Abdul-aziz Yari, is the chairman of the Governors’ Forum.

Workers in the state are ready for the industrial action and they will continue to support labour leaders in their struggle for better welfare, he said.

In a related development, Bishop Paulinus Ezeokafor of the Catholic Diocese of Awka insisted state governors could pay the amount, if they are financially prudent. Describing the figure as meagre, he urged the governors to deploy part of their security votes for the purpose.

“There is serious hunger in the land and it is no longer funny. Government should do something quickly,” he said.