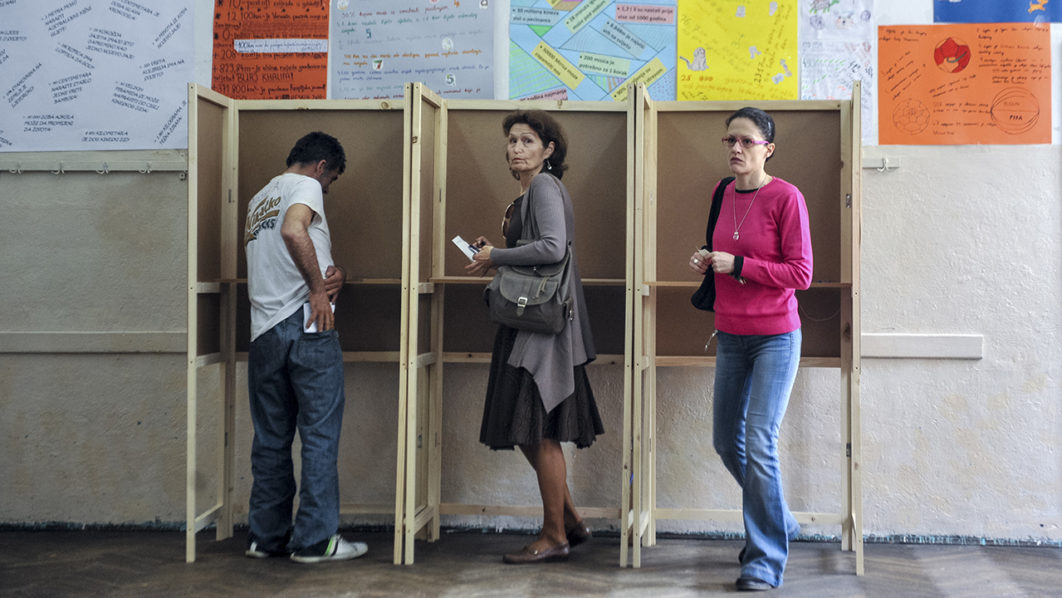 Montenegrin people prepare to cast their votes for the presidential election at a polling station in Podgorica on April 15, 2018.<br />The people of Montenegro began voting on April 15 in polls expected to see pro-Western former prime minister Milo Djukanovic elected as president of the tiny Balkan nation that is aspiring to join the EU. / AFP PHOTO / SAVO PRELEVIC

The people of Montenegro voted Sunday in polls expected to see pro-Western six-time former prime minister Milo Djukanovic elected as president of the tiny Balkan nation that is aspiring to join the EU.

Having dominated politics in the former Yugoslav republic for nearly 25 years, Djukanovic stepped down as prime minister in October 2016. He announced his comeback bid last month.

The 56-year-old economist led Montenegro to independence from Serbia in 2016 and into NATO last year — now he wants to take the predominantly Orthodox country, a part of which has strong pro-Russia sympathies, into the European Union.

If he wins the presidency, currently a ceremonial post held by his ally Filip Vujanovic, it is expected to become the real seat of power in the country of 620,000 people.

Polls opened at 7am (0500 GMT) and closed at 8pm, with first results expected soon after.

Sunday’s vote passed off peacefully amid fears of disorder after 20 people were arrested and accused of trying to stage a coup during legislative elections in 2016.

Djukanovic is the most high-profile of the seven candidates, with posters plastered all over the capital Podgorica — where a third of Montenegro’s population lives — proclaiming him as “leader, statesman and president of all citizens”.

Opinion polls indicate he is such a strong favourite that he may be able to win more than half of the votes, which would rule out a run-off planned for April 29.

“I will win today,” Djukanovic predicted after voting.

– ‘Reign of an autocrat’ –
The issue of organised crime has cast a shadow on the campaign, with some 20 people killed by assassination or car bombs over the last two years.

The opposition accuses Djukanovic of being linked to the mafia, which he denies.

“As president, I will do everything in my power… to give the police the authority that would allow them to protect citizens from those who put their lives in danger,” Djukanovic said during the campaign.

His strongest rival is Mladen Bojanic, who has the support of most opposition parties, including pro-Russian factions, and is expected to secure around a third of the vote.

On Sunday Bojanic said he voted to “put an end to the reign of an autocrat who wants to turn Montenegro into a dictatorship”.

Earlier in the campaign he accused Djukanovic of being “the creator of the instability and chaos that we witness in the streets of Montenegro”.

“I agree with Djukanovic that the state is stronger than mafia. But the problem is that I do not know which side he is on,” he added.

Djukanovic has claimed the opposition want to turn the country into a “Russian province” and threaten Montenegro’s multicultural way of life.

The former prime minister, who has also served one term as president, can count on the support of the Croatian, Albanian and Bosnian minorities, which make up 15 percent of the electorate.

– ‘Normal relations with Russia’ –
Pro-Russian Marko Milacic, a candidate forecasted to win just three percent of the vote, accuses Djukanovic of being most responsible for the “situation in the country, from bloody streets to the foreign policy and a ruined economy”.

With Montenegro’s average salary at around 500 euros ($615) and unemployment at over 20 percent, the debate over the West versus Russia is not the main concern of many Montenegrins.

For Djukanovic, however, the choice between Brussels and Moscow is crucial to whether Montenegro will “remain on its road of development”.

But he has toned down the anti-Russian rhetoric, saying he wanted “normal relations with Russia if it is prepared to do the same”.

Along with Serbia, Montenegro is the favourite to join the EU next, possibly as early as 2025.​

The EU in its 2016 country progress report told Montenegro it should continue its efforts to reduce organised crime, in particular on human trafficking and money laundering, and also noted the problem of international cigarette smuggling through the port of Bar.

All candidate countries are strongly encouraged to align their foreign policy with the EU, including regarding Russia.

In the run-up to the vote, local newspapers have alleged electoral fraud, saying many dead people figured on voters’ lists.

The last turnout figures, one hour before the closing of the polls, was 58.5 percent, down from the 2016 elections.

Biljana Popovic from the Centre for Democratic Transition, one of the NGOs monitoring the vote, said there were “a few irregularities that so far are not likely to affect the election”.