You are here
Home > Ahmed Tinubu > My return in 2019 non-negotiable, says Buhari 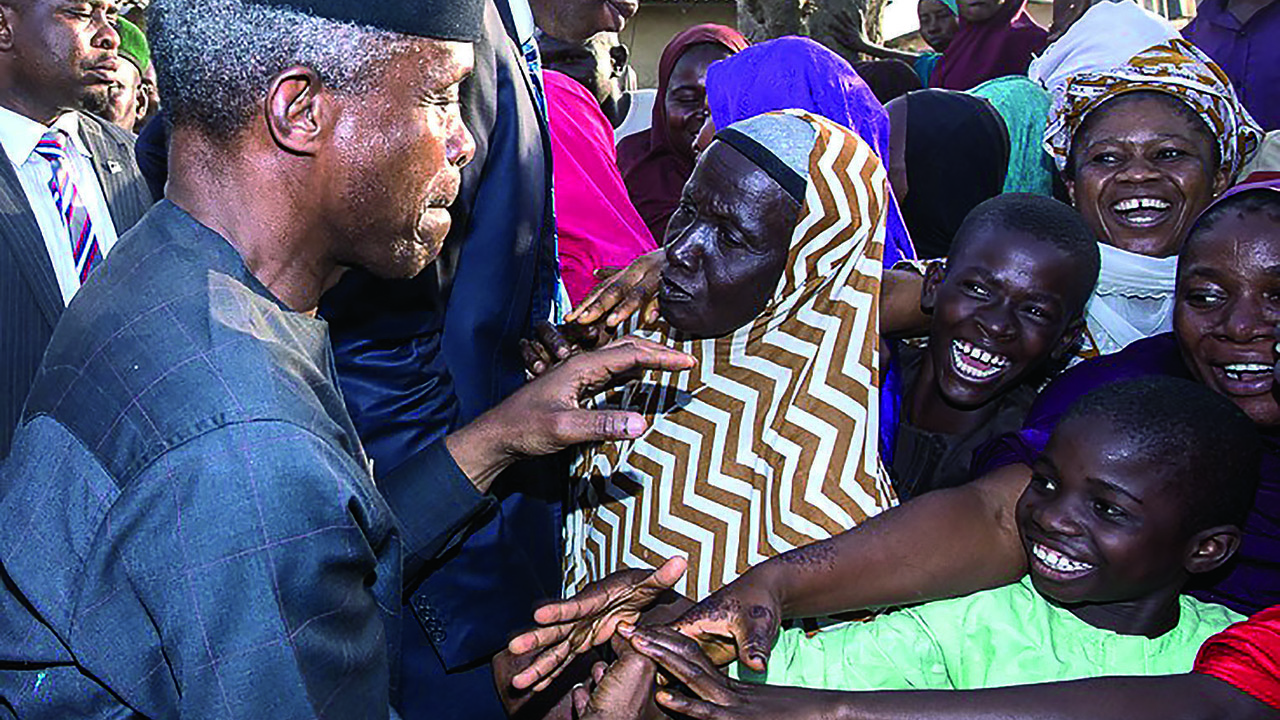 President Muhammadu Buhari has urged his supporters not to panic, saying his return to power in 2019 is non-negotiable.

He also described those seeking to unseat him in next year’s general elections as enemies who stole from the nation blindly and should be avoided.

Buhari, who was represented by Vice President Yemi Osinbajo, cited infrastructural development, fight against corruption, Treasury Single Account and school feeding programme as some of the achievements that have endeared him to the people.

He wondered why the Peoples Democratic Party (PDP), which he accused of plundering the nation’s resources, would want to stage a return in 2019, especially after his own government has made the country “the best economy” in Africa.

Tinubu vowed that the APC would beat down the PDP, flaying what he described as political prostitution by PDP’s presidential candidate, Atiku Abubakar.

He also criticised Senate President Bukola Saraki for allegedly riding on the ruling party’s mandate to give a lifeline to the opposition.

Osinbajo’s campaign train stopped at the Nyanya and Karu areas of the Federal Capital Territory (FCT) yesterday for the commencement of a door-to-door campaign.

Security operatives on his entourage had a herculean task controlling the crowd as people struggled to catch a glimpse of the vice president and shake his hands as he moved through the densely populated suburbs.

Osinbajo, at Nyanya, was received at the residence of Alhaji Kabiru Ahmed. Addressing the crowd there, he said: “We are here to greet you and we want to say to you that President Buhari is determined that if you vote for him for this second term, we will all go higher; we will all do better. Our country can feed all of us and we can find work for everybody because we have the money.

He had a similar message for the people at a community square in Karu. He said: “We are going higher, higher; we are going higher and higher, and I am very happy to be here with you. I want you to believe that President Muhammadu Buhari is going to do even better.”

Buhari, who is currently attending the UN Climate Change Conference, COP24, pledged that his government would not rest until the remaining Chibok girls kidnapped by Boko Haram in April 2014 have been released.

He renewed the commitment yesterday in Katowice, Poland, at a bilateral meeting with Swiss President Alain Berset, on the margins of the conference.

The president had spent the entire day at the International Conference Centre, Katowice, where he delivered his national address at the opening of the 12-day meeting, met with several world leaders, and visited the Nigerian pavilion.

During his meeting with the Swiss president, Buhari thanked the Swiss Confederation for its role as intermediaries in efforts to secure the release of some of the abducted. The issue of the remaining girls and other kidnapped persons will remain a “key priority” for the Nigerian government, he said.

Buhari and his Swiss counterpart discussed joint strategies to ensure the safe return of the girls, building on past successes. He also welcomed the Swiss president’s commitment to continue providing humanitarian assistance to Internally Displaced Persons (IDPs) in Nigeria.

In separate bilateral meetings with the President of Poland Andrzej Duda and the Prime Minister Mateusz Morawiecki, Buhari commended the country for a successful outing at the opening of the COP24 meeting.

He told his Polish counterpart that Nigeria was facing serious climate change challenges, particularly the receding Lake Chad, which is a source of livelihood to some 40 million people living in the region.

“Nigeria is totally committed to global efforts to mitigate and adapt to effects of climate change,” Buhari told the Polish leader, whose country holds the presidency of COP24.

Meanwhile, the wife of the President, Aisha Buhari yesterday stunned her audience when she revealed that two men in her husband’s government were obstructing the administration’s progress.

She regretted that but for the duo the APC-led government would have achieved more. The men, according to her, would never allow things to move fast.

The president’s wife, who did not disclose the names of the men, said she was dismayed at the disposition of some Nigerians who, rather than fight the two, crawl to them at night to curry favour.

In an emotionally laden voice, Mrs. Buhari added: “I have realised that Senator Babafemi Ojudu, SA political to the president, and Dr. Hajo Sani, my aide Sajo, and Wife of the Vice President Mrs. Osinbajo are not comfortable with my saying this and want me to confine myself to my prepared speech but we must say the truth.”

She urged women to vote massively and return the APC to power and encouraged them to spread the news of accomplishments by the government. She also called for a minute’s silence in honour of soldiers that died fighting the insurgency.

She commended the political group for organising the summit and setting the tone for other Buhari support groups.

Also speaking at the event, the wife of the Vice President Dolapo Osinbajo commended women for providing a permanent support base for the APC. She urged them to keep supporting the party to achieve a better Nigeria for them and their children.

Earlier, the national coordinator of Project 4+4, Comrade Garba Musa Bello, explained that the purpose of the summit was to bring together women from the country’s 774 local government areas and give them a strategy for the campaign.

At an interactive session with political party leaders and officers from other security agencies in Abeokuta, Ogun State, he urged “everyone to tread on the path of peace before, during and after the 2019 elections.”

He warned that any person found with arms during campaigns would be prosecuted. He also appealed to parents and guardians to keep their wards off thuggery, because “politics is not a do or die affair.”