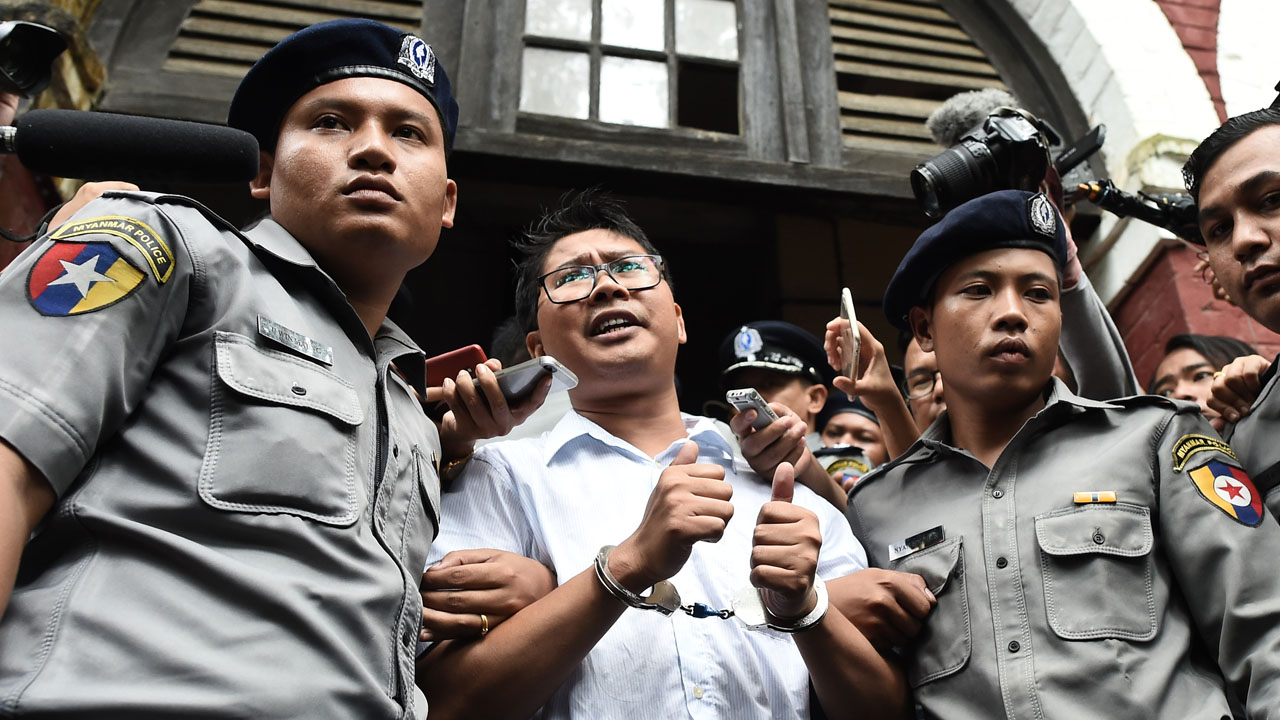 (FILES) This file photo taken on September 03, 2018 shows Myanmar journalist Wa Lone (C) is escorted by police after being sentenced by a court to jail in Yangon. – Two Reuters journalists jailed in Myanmar over their investigation of atrocities committed against the Rohingya will learn January 11 if an appeal against their conviction has succeeded. (Photo by Ye Aung THU / AFP)

Two Reuters journalists jailed for seven years while investigating atrocities committed against the Rohingya in Myanmar had their appeal dismissed Friday, dismaying colleagues and tearful family members who had held slim hopes they would walk free.

Reporters Wa Lone, 32, and Kyaw Soe Oo, 28, were arrested in Yangon in December 2017 and later jailed for violating the state secrets act, a charge Reuters said was trumped up to muzzle their reporting.

Prosecutors say the two had classified information regarding security operations in Rakhine state, from where hundreds of thousands of Rohingya Muslims fled during an army-led crackdown the United Nations has described as “ethnic cleansing”.

Aung Naing, a judge at the Yangon Regional High Court, said the original verdict was a “reasonable decision” delivered in line with the law.

“The court decides to dismiss the appeal,” he said.

The reporters’ wives cried after the decision, which condemns the pair to continue their incarceration at Yangon’s notorious Insein prison, where they have been held for the last 13 months.

“I feel really sad that what we hoped for did not happen,” a stone-faced Chit Su Win, who is married to Kyaw Soe Oo, told reporters outside the court.

Wa Lone’s wife Pan Ei Mon — who has given birth to a baby girl since her husband was put behind bars — was similarly despondent.

“I don’t want to talk about the decision today as it is not good news,” she said.

Presidential pardon?
The two men — who were not present for the decision — have insisted they were victims of a police set-up, pointing to testimony from a serving officer who said a superior ordered others to entrap them.

At the time of the arrest, they were probing the extrajudicial killing of 10 Rohingya at Inn Din village in northern Rakhine state.

“They remain behind bars for one reason: those in power sought to silence the truth,” Reuters editor-in-chief Stephen J. Adler said in a statement Friday.

The original trial was widely regarded as a sham and seen as punishment for their investigation and a warning shot to other media.

It sparked outrage from around the world including from US Vice President Mike Pence.

Outside the country, the two men have been hailed as media freedom heroes and jointly named Time Magazine’s Person of the Year 2018, alongside other high-profile journalists.

But they have gained little sympathy within Myanmar.

The violent military campaign in 2017 forced more than 720,000 Rohingya across the border to Bangladesh, with refugees bringing accounts of murder, rape and arson.

UN investigators have called for top generals to be investigated for a genocide and singled out civilian leader Aung San Suu Kyi for criticism for failing to stop the crackdown.

The image of the formerly renowned champion of human rights has been further damaged by the Reuters conviction.

In her most comprehensive comments on their case in September, Suu Kyi denied the pair had been jailed “because they were journalists” and endorsed the court decision that “they had broken the Official Secrets Act”.

Options are dwindling for the two young men.

The legal team can lodge an appeal with Myanmar’s Supreme Court but some see a presidential pardon as another way out, even though the president Win Myint is a Suu Kyi loyalist.

Reacting to the verdict outside the court the European Union ambassador to Myanmar Kristian Schmidt said he looked to the president to “correct” the injustice.