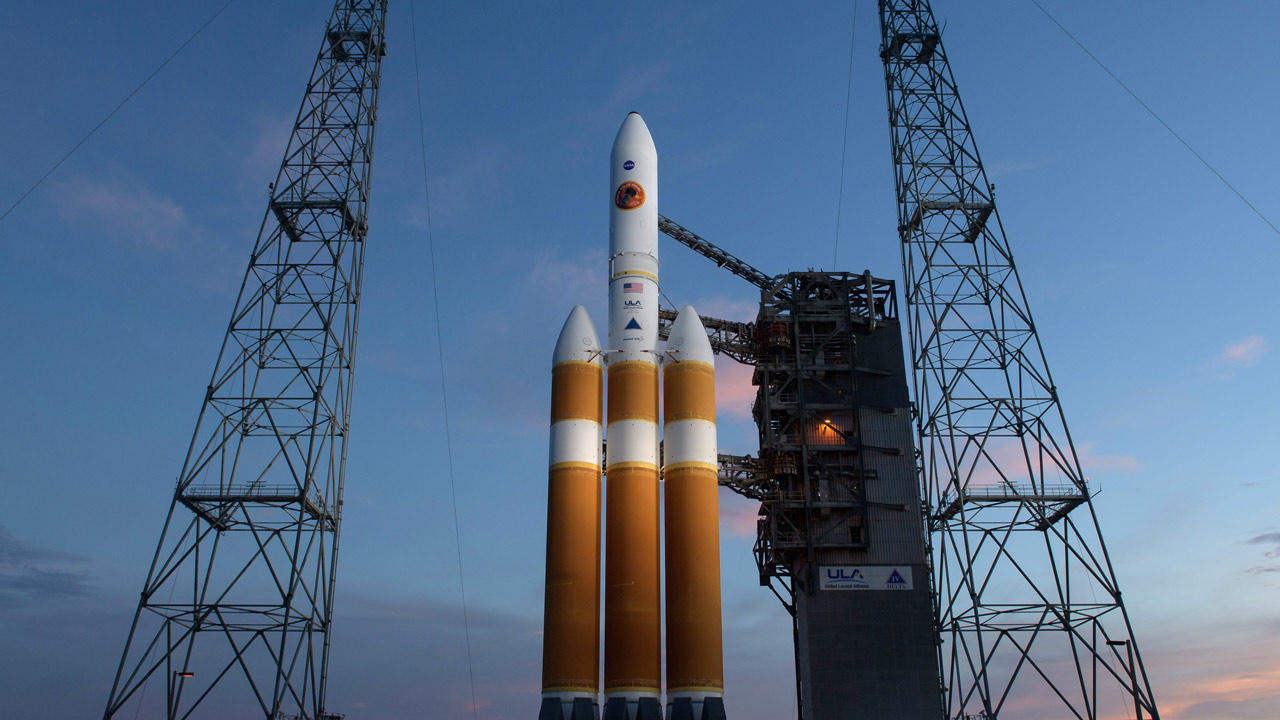 This handout photo released by NASA shows the United Launch Alliance Delta IV Heavy rocket with the Parker Solar Probe onboard shortly after the Mobile Service Tower was rolled back on August 10, 2018, Launch Complex 37 at Cape Canaveral Air Force Station in Florida. NASA counted down on August 10 to the launch of a $1.5 billion spacecraft that aims to plunge into the Sun’s sizzling atmosphere and become humanity’s first mission to explore a star. The car-sized Parker Solar Probe is scheduled to blast off on a Delta IV Heavy rocket from Cape Canaveral, Florida early on August 11. Bill INGALS / NASA / AFP

NASA postponed until Sunday the launch of the first ever spacecraft to fly directly toward the Sun on a mission to plunge into our star’s sizzling atmosphere and unlock its mysteries.

The reason for the delay was not immediately clear, but was called for after a gaseous helium alarm was sounded in the last moments before liftoff, officials said.

Engineers are taking utmost caution with the $1.5 billion Parker Solar Probe, which Thomas Zurbuchen, head of NASA’s science mission directorate, described as one of the agency’s most “strategically important missions.”

The next launch window opens at 3:31 am (0731 GMT) on Sunday, when weather conditions are 60 percent favorable for launch, NASA said.

By coming closer to the Sun than any spacecraft in history, the unmanned probe’s main goal is to unveil the secrets of the corona, the unusual atmosphere around the Sun.

Not only is the corona about 300 times hotter than the Sun’s surface, but it also hurls powerful plasma and energetic particles that can unleash geomagnetic space storms, wreaking havoc on Earth by disrupting the power grid.

These solar outbursts are poorly understood, but pack the potential to wipe out power to millions of people.

‘Full of mysteries’
The probe is protected by an ultra-powerful heat shield that is 4.5 inches (11.43 centimeters) thick.

The shield should enable the spacecraft to survive its close shave with the fiery star, coming within 3.83 million miles (6.16 million kilometers) of the Sun’s surface.

The heat shield is built to withstand radiation equivalent to up to about 500 times the Sun’s radiation on Earth.

If all works as planned, the inside of the spacecraft should stay at just 85 degrees Fahrenheit.

91-year-old namesake
The tools on board will measure the expanding corona and continually flowing atmosphere known as the solar wind, which solar physicist Eugene Parker first described in 1958.

Parker, now 91, recalled that at first some people did not believe in his theory.

But then, the launch of NASA’s Mariner 2 spacecraft in 1962 — becoming the first robotic spacecraft to make a successful planetary encounter — proved them wrong.

“It was just a matter of sitting out the deniers for four years until the Venus Mariner 2 spacecraft showed that, by golly, there was a solar wind,” Parker said earlier this week.

Parker said he was “impressed” by the Parker Solar Probe, calling it “a very complex machine.”

According to Zurbuchen, Parker is an “incredible hero of our scientific community.”

“Life is all about these big arcs. Sometimes you just see, like how over a lifetime, things just come together and create these amazing stories, these leaps going forward.”