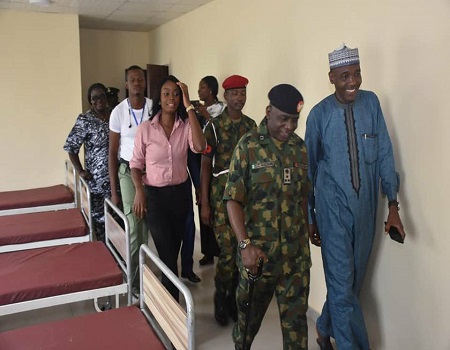 Dr Jack Momoh, the NHA Chief Medical Director (CMD), at the commissioning assured that the amenities and healthcare services would be extended to cater for the health needs of the community around the camp.

He said that the clinic was built within one year with the support of clients and friends of the hospital as part of the hospitals Cooperate Social Responsibility (CSR) to the society.

Momoh said that although the hospital was being formally handed over to the scheme, the hospital’s presence would fully remain in the daily running and maintenance of the facility.

The CMD said that the project was carried out with the directive of the President Muhammadu Buhari and the Minister of Health, Prof. Isaac Adewole with the support of an ex-corps member, Dr Ijeoma Nwaejike.

“The facilities available at the orientation camp has not been adequate to cater for the health needs of corps members in the camp and so the President and the Minister of Health gave the directive that the facilities should be improved.

“Someone introduced us to a corps member who was looking for support to build a camp clinic and since our purpose was in alignment, we decided to work together so it was just a coincidence that she came at that time.

“We took over the project and built it from foundation to finish and also equipped it with all the equipment and furnishings it requires.

“At every orientation camp, we always send doctors to assist the corps doctors working at the clinic and we will continue to do so.

“We recommend the ex-corps member who facilitated the project for the presidential award so that others will be encouraged.

“Because of her hard work, persistence and effectiveness, we have given her a job at the hospital so she is currently on the payroll of the national hospital.

“We want to therefore formally handover this clinic to the Director-General of the NYSC for use by corps members; we pledge to continue to support the camp clinic in the area of manpower and medical equipment during every orientation camp.

“The completed facility can admit seven male and six female patients at a time with built-in call duty rooms for male and female doctors.

“We have a pharmacy in the facility and about four consulting rooms with a waiting room that is why the NYSC director general said that the facility is more than a clinic and can, therefore, be extended as a primary health care facility.

“We have also agreed that it is necessary to run the facility as a primary healthcare centre to cater for the health needs of the local community around the camp,’’ Momoh said.

Momoh said that to achieve inclusiveness of the local community, the hospital would carry out awareness and mobilisation at the community level to inform community members of the availability of the facility.

He said that civil servants living around the facility who were enrolled in the National Health Insurance Scheme (NHIS) would also be encouraged to use the facility as their point of accessing health care.

The NYSC Director-General, Maj.-Gen. Suleiman Kazaure, earlier, while thanking the national hospital CMD for his effort, urged him to convert the facility to a primary healthcare facility to cater for the health needs of communities around the camp.

Kazaure said that the facility was more than a clinic as it had standard amenities which could be used to cater for a larger number of persons for an extended period of time.

“I sincerely thank the National Hospital CMD for his efforts and as I said earlier, this clinic is not a camp clinic because orientation lasts for just three weeks.

“I want to urge the National Hospital to convert the facility to a Primary Healthcare facility so that the local community can benefit from it as well.

“The clinic is more than a camp clinic so it can be converted for the use of the community and I am sure it is a development that will be highly appreciated by the community,’’ Kazaure said.

He urged all corps members sworn-in for the 2019 Batch ‘A’ service year nationwide to be proactive as they were the future leaders of the nation.

The director-general also urged them to be good ambassadors of their homes and the nation wherever they found themselves.

Kazaure assured corps members that once the minimum wage was affected by the Federal Government, their allowances would increase.

“The moment it is approved, I am sure that corps members will also be affected by the change,’’ Kazaure said.

The ex-corps member, Dr Nwaejike said that her desire to help provide a clinic for corps members was borne out of the health needs of corps members during the orientation camp.

Nwaejike said that during her service year, she observed that many corps members could not access quality healthcare at the camp due to unavailability of facilities.