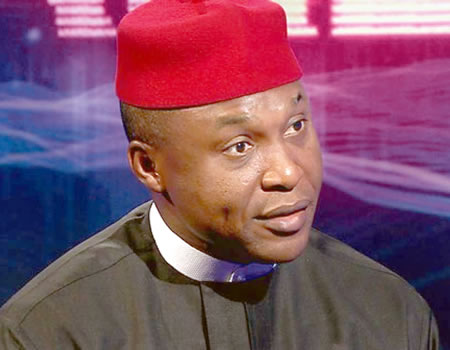 The Chairman House Committee on Environment and Habitat, Honourable Obinna Chidoka, has said that the National Biosafety Management Agency (NBMA) has the full support of the National Assembly.

He stated this while addressing the management team of NBMA during an oversight visit by the Committee to the Agency in Abuja on Monday.

Hon. Obinna Chidoka, in his address, also said that all those working against the NBMA must keep in mind that the Agency is acting in accordance with the law and is completely backed by the National Assembly.

“We have and will continue to give full support to NBMA as it is a very important Agency which was established by law and acts accordingly,” he said.

He commended the Nigerian biosafety system as being very strong compared to that of many countries who also practice modern biotechnology and used the opportunity to invite members of the public to a public hearing of the amendment of the National Biosafety Management Agency Act 2015 to include new and emerging technologies such as gene drive and gene editing, which will hold on 27th March, 2019 at the national assembly.

Director General/CEO NBMA, Dr. Rufus Ebegba, who gave a brief of the recent activities of the Agency, applauded the effort of the committee in ensuring a holistic biosafety framework by proposing an amendment to the National Biosafety Management Agency Act 2015 to include emerging technologies such as gene drive and synthetic biology.

“We have a great responsibility in an ever-expanding sector and we must fine-tune the law to regulate emerging technologies in the biotechnology sector,” Dr Ebegba said.

Hon. Aishatu Dukku, a member of the committee, while commending the staff and management of NBMA as working excellently in the face of adversity, stated that: “Farmers are desperate to find solutions to insect attacks on their beans farms. While they are offered solutions in the form of more pesticides which are used excessively, recently, a new beans variety which is genetically modified was developed promising to reduce the insect attacks while reducing the use of pesticides.

“Your activities as a safety and regulatory agency, which has confirmed this variety safe for Nigerians, are in the interest of the common man and I must commend that.”

In his remarks, Head, Planning Research and Statistics, Mrs. Scholastica Bello, declared that a country without a biosafety law will be a ground for the dumping of GMOs which haven’t been confirmed safe and that is a fact every Nigerian must keep in mind.

The House Committee on Environment and Habitat, who also visited the upgraded state-of-the-art Genetic Modification Detection and Analysis Laboratory of the National Biosafety Management Agency, interacted with the acting Head of the laboratory Ms. Ngozi Miracle, who took time to explain the workings of the various equipment in the laboratory.