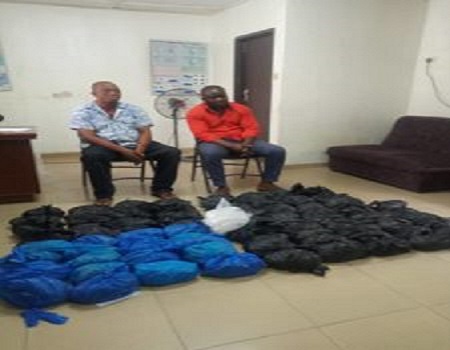 The National Drug Law Enforcement Agency (NDLEA), says it has dismantled a six-man methamphetamine syndicate and intercepted 309 kilogrammes of ephedrine and a clandestine laboratory in Enugu and Lagos.

The agency’s Head of Public Affairs, Mr Jonah Achema, made this known in a statement in Abuja on Wednesday.

Achema named the suspects in Enugu as Okeke Chukwunwike Celestine, Ezeagba Paul Sunday and Ike Chukwuma Samso while the others in Lagos were Eze Christopher Ikechukwu, NwokoloAmobi Sunday and Adelakun Ilelabayo Oluade.

According to him, the syndicate is specialised in the illegal importation of ephedrine to run methamphetamine laboratory in Nigeria, especially in the Eastern and Western parts of Nigeria.

He said that methamphetamine was an illegal drug in the same class as cocaine and other powerful street drugs and was being illicitly trafficked.

“Enugu State Command of the Agency had intercepted 100 kilogrammes of Ephedrine, a precursor chemical for the production of methamphetamine.

“The Command discovered that the precursor chemical is being used by a clandestine methamphetamine laboratory located at Trans-Ekulu Estate in Enugu.

“The Laboratory has been dismantled by the agency and further investigation led to the arrest of the three other members of the syndicate in FESTAC Town in Lagos and 209 kilogrammes of the illicit ephedrine was recovered, bringing the total ephedrine seizure to 309 and total arrest to six suspected persons,” he said.

Achema noted that methamphetamine production had a devastating impact on the environment where the clandestine laboratory was located.

He said that the laboratory polluted the air, ground water, soil and the vegetation within the locality of the methamphetamine laboratory while posing a great threat to human security.

The spokesman also noted that 16 methamphetamine laboratories had been discovered in Nigeria between 2011 and 2018 and all dismantled.

“In 2011, Nigeria acquired the status of methamphetamine producer nation through the discovery of the first methamphetamine laboratory in Lagos. Other laboratories were discovered in, Lagos, Anambra and Delta States.

“The discovery of these laboratories across the country, apart from the fact that Nigeria is the highest producer of cannabis in West Africa, portends grave danger for the country and its image which invariably affects the security of the nation,” he said.

According to him, Methamphetamine is an emerging drug clandestinely produced in the country.

“It is a highly addictive substance that affects the central nervous system.

“It gives a false sense of well-being and energy. The continued use of the drug creates several negative effects and irreversible harm.

“The first experience might involve some pleasure, but from the start, methamphetamine begins to destroy the user’s life,” he warned.