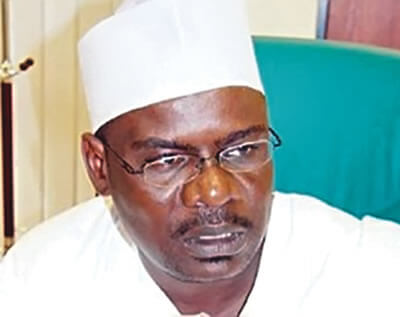 Former Senate Leader, Sen. Mohammed Ali Ndume on Monday submitted a letter of intent to contest the Senate Presidency of the 9th Senate to the leadership of the All Progressives Congress (APC).

Ndume, in the letter dated March 25, 2019, told the APC that he was seeking the party’s nod to contest the position of Senate President in the 9th National Assembly.

He said that he was seeking the party’s blessing in his bid to contest the Senate top job and had decided to first start by seeking the nod of his party.

He also said that he was throwing his hat into the ring believing that the Senate President position would be zoned to the North East geo-political zone where he hails from.

Ndume was Senate Leader at the start of the 8th Assembly and he retained the position until things degenerated between him and Senate President Bukola and he was removed in December 2017 when he was removed and replaced with Senator Ahmed Lawan.

In the letter of intent addressed to the APC National Chairman, Comrade Adams Oshiomhole, Ndume said the decision to seek election into the exalted office was borne out of his desire to help accelerate socioeconomic development of the nation.

He said: “Following the successful conduct of the 2019 general election and the overwhelming victory of our great party the APC at all levels, I hereby forward my letter of intent to contest for the office of the President of the Senate in the 9th National Assembly,” the letter read in part.

“I wish to emphasize that my decision to contest for the Senate Presidency is informed by my conviction to contribute my quota to nation building,” the letter stated.”

The Senator who had also served as Minority Leader in the 6th House of Representatives before serving as the Majority Leader in the 8th Senate assured of his capacity to deliver on party policies and programmes, saying, “my vast legislative experience and my deep desire to take Nigeria to the next level of development” are reasons for contesting.

Sen. Ndume, in the letter, stated that he had consulted with respected party members both within the North East and other parts of the country, whom he said have encouraged his aspiration.

He further wrote: “For these reasons and more, I wish to forward myself for the blessings of the Party, my colleagues in the Senate and fellow Nigerians for the post of the President of the Senate.

“That the Party leadership will see the desired wisdom in zoning the Senate Presidency to the North-East due to our sterling performance in the 2019 polls, giving the President the second highest votes cast.”

He added that the position of Senate President would enable him to also fulfill the aspirations of the insurgency-ravaged people of the North East whose respite came with the coming of APC government in 2015.