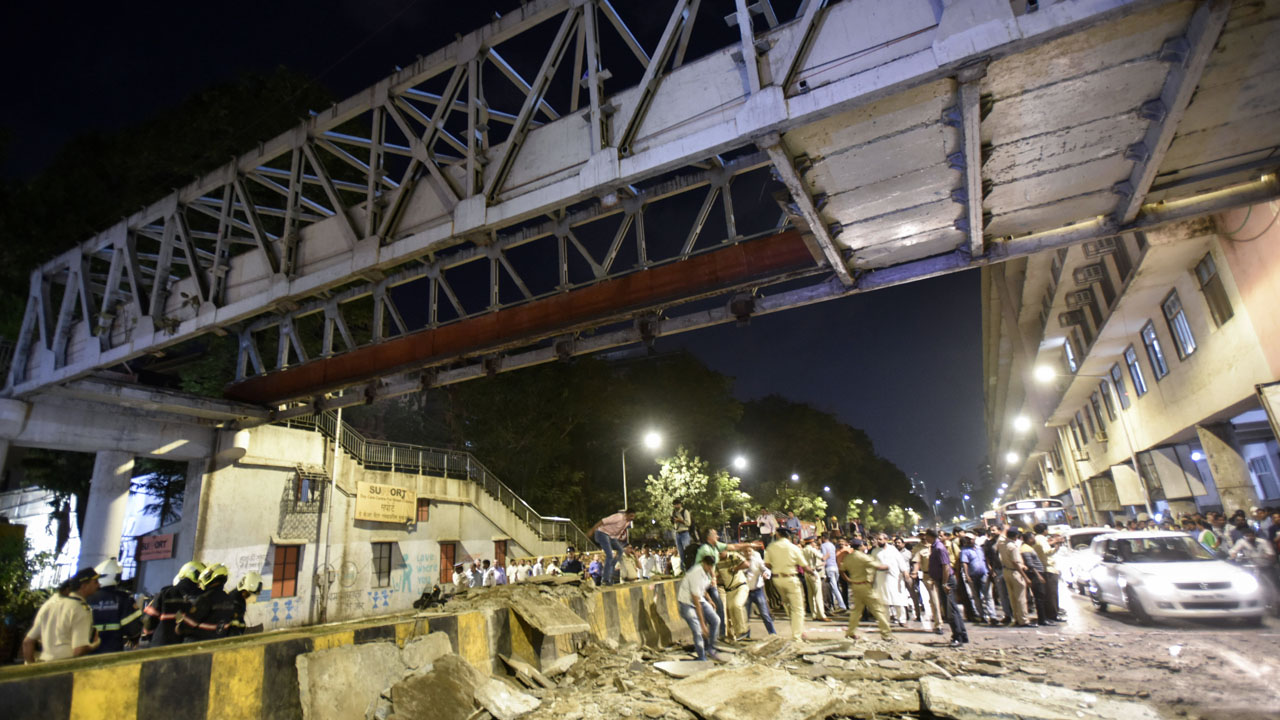 Onlookers and rescue workers gather at the site of a footbridge after its collapse, outside the Chhatrapati Shivaji Maharaj Terminus railway complex in Mumbai, on March 14, 2019. – Four people were killed and dozens injured when a footbridge collapsed near Mumbai’s main train station on March 14, 2019, the latest accident to highlight creaking infrastructure in India’s financial capital. (Photo by – / AFP)

The bridge, which was under repair, gave away around 7.30 pm (1400 GMT) on Thursday as rush hour commuters made their way into Chhatrapati Shivaji terminus, the city’s main train station.

It was the latest accident to highlight creaking infrastructure in India’s financial capital and came almost two years after 23 people died in a crush on a narrow overcrowded footbridge at another station.

Three women and three men, aged between 32 and 55, died in Thursday’s tragedy. Another 33 people were injured.

Indian media reported that three who succumbed to their injuries were nurses. Two of them died at the hospital where they worked after doctors were unable to save them.

Mumbai police spokesman Manjunath Singe said in a WhatsApp message to journalists that a first information report had been registered against officials for “causing death by negligence”.

Social media users took to Twitter to vent their anger at the authorities.

“To hell with your thoughts and prayers, to hell with your ‘Mumbai spirit’… People have to suffer without even (the) most basic infrastructure. When will (local authority) BMC and railways ever learn?” wrote Srini Swaminathan.

Twenty-three people died in a stampede at Prabhadevi station in the centre of the city in September 2017.

Indian railway officials blamed bad weather despite commuter warnings before the tragedy of a disaster waiting to happen.

Experts pointed the finger of blame at the railway network’s creaking infrastructure, which has long struggled to cope with several million daily passengers.

About 7.5 million passengers commute in nearly 2,500 trains daily on Mumbai’s colonial-era rail network, a lifeline for the city’s 20 million residents.

An average of almost 10 people die on the suburban railway every day, either from falling off crowded trains or while crossing the tracks.

Commuters say investment in the railway’s crumbling infrastructure has not kept up with the city’s burgeoning population.