You are here
Home > Ank Bijleveld > Netherlands in a ‘cyberwar’ with Russia, says defence minister 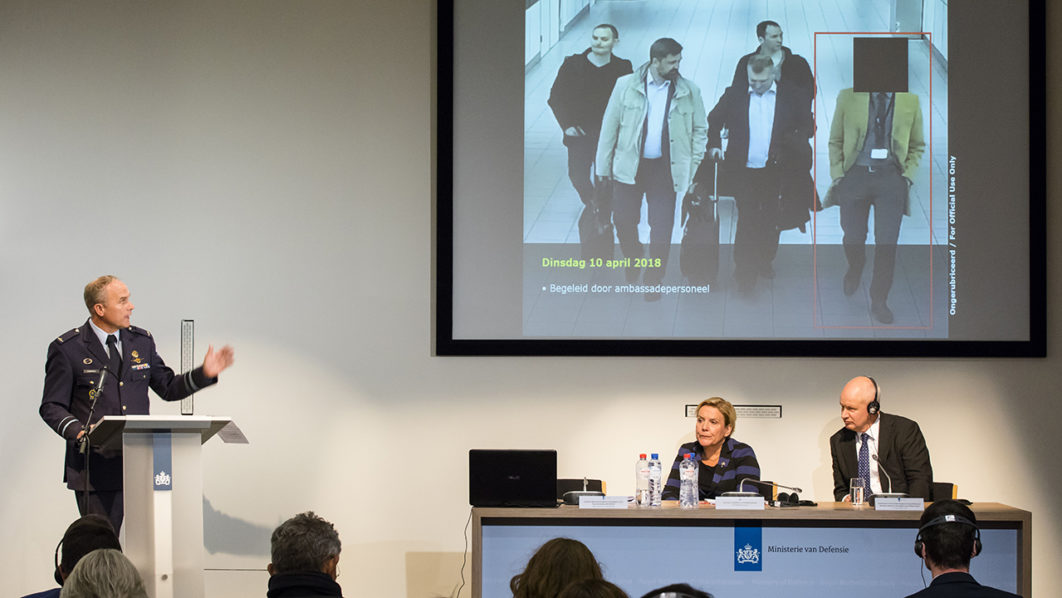 (L/R): Head of Dutch Military Intelligence and Security Service Onno Eichelsheim, Minister of Defence Ank Bijleveld and British ambassador Peter Wilson attend a press conference of the Dutch Military Intelligence and Security Service (MIVD) at The Hague, The Netherlands, on October 4, 2018. – Dutch intelligence thwarted a Russian cyber attack targeting the global chemical weapons watchdog in April and expelled four Russian agents, the government said. The Russians set up a car full of electronic equipment in the car park of a hotel next to the Organisation for the Prohibition for Chemical Weapons in The Hague in a bid to hack its computer system, it said. (Photo by Bart Maat / ANP / AFP) / Netherlands OUT

The Netherlands is in a ‘cyberwar’ with Russia, Defence Minister Ank Bijleveld told Dutch television Sunday, speaking in the wake of an alleged hacking attempt by four Russians in The Hague.

“What happened is really dangerous,” Bijleveld told Dutch broadcaster NPO, referring to the incident, which happened in April outside the headquarters of the Organisation for the Prohibition of Chemical Weapons (OPCW).

Asked if the current situation between the two countries could be described as “cyberwar” she replied: “Yes, that is the case.”

Officials said the men entered the country on Russian diplomatic passports on April 10 and were caught on April 13 with a car full of electronic equipment in the Marriott Hotel next to the OPCW headquarters.

Russia has vehemently denied the accusations. Foreign Minister Sergei Lavrov insisted on Monday that the incident was a “misunderstanding” and that the Russians had been on a routine visit.

But on Sunday Bijleveld said: “People try to interfere in various ways in our life all the time, to influence our democracy.

“We have to shake off the naivety in this domain and take measures,” which was why they had taken the decision to make the incident public, she added.

Following these incidents, the defence ministry had beefed up its budget for cyberwarfare, she said.

“We are investing more in intelligence services to be able to see what is going on and take measures if necessary.”

NATO was also considering a Dutch offer to use its “cybersoldiers”, she added.

The alleged attempt to hack into the OPCW network came as the organisation was investigating the fatal poisoning of former Russian spy Sergei Skripal in London.

Britain has blamed Russia for the attack, which took place in March in the southern English city of Salisbury and also claimed the life of Skripal’s daughter, Yulia. Moscow has denied any involvement.

The OPCW was also investigating a suspected chemical weapons attack in the Syrian city of Douma, which western sources say was carried out by forces of the Russian-backed Syrian government.