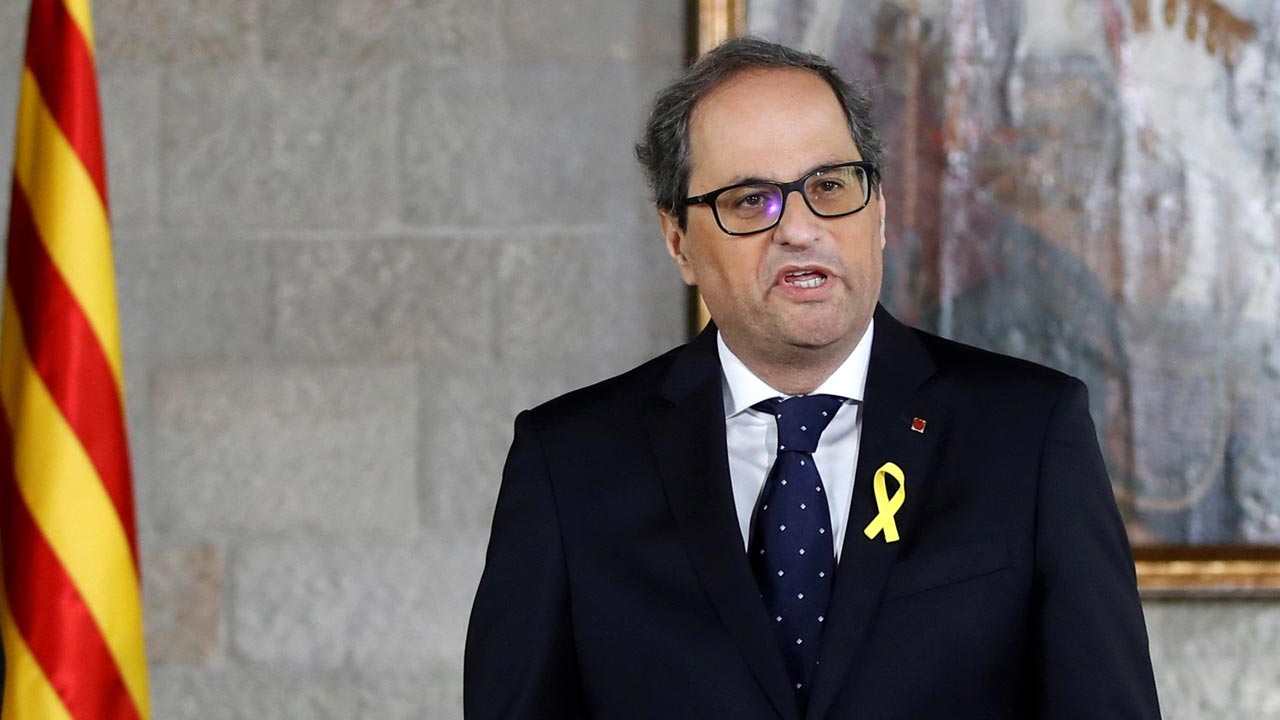 Newly appointed Catalan president Quim Torra delivers a speech during an official swearing-in ceremony at the Generalitat Palace in Barcelona on May 17, 2018. Torra, Catalonia’s controversial new separatist president, was sworn in during a short ceremony where he avoided promising to obey the constitution and pledged instead to be faithful to “the will of the Catalan people”. Alberto Estévez / POOL / AFP

Catalonia’s new president Quim Torra on Saturday named two former ministers, jailed by Madrid for backing independence from Spain, together with two others who fled into exile, to his regional government.

Torra appointed his government by decree but it could still be blocked by Spain, which has insisted his administration be “legal and viable” after it imposed direct rule on the region in October when the then Catalan government declared independence.

Torra named 13 “advisors” to his government, including Jordi Turull and Josep Rull who are currently being held in custody just outside Madrid.

Two others, Toni Comin and Lluis Puig, are in exile in Belgium, where they fled with deposed Catalan leader Carles Puigdemont.

Turull and Rull both accepted their nominations on Twitter.

Torra was elected by the Catalan parliament on Monday and sworn in Thursday, in a move that marks the end of nearly seven months of political limbo in the northeastern Spanish region, which has been under direct rule from Madrid since the central government deposed Puigdemont following a failed declaration of independence on October 27.

Torra, a 55-year-old editor who has long campaigned for independence, described himself as a “caretaker president” as he awaits the return of Puigdemont, whom he considers the “legitimate” leader.

Puigdemont, who first fled to Belgium, was detained in Germany in March after Spain issued a European arrest warrant against him.

Madrid wants him extradited to Spain to try him on charges of rebellion and misuse of public funds for staging an independence referendum in Catalonia on October 1 even though the courts had ruled it unconstitutional.

A German court last month dismissed the extradition request for Puigdemont on the rebellion allegations and released him on bail.

Spanish prosecutors have since handed over new information to Germany they hope will prove the use of violence, to justify the rebellion charge and their extradition request.