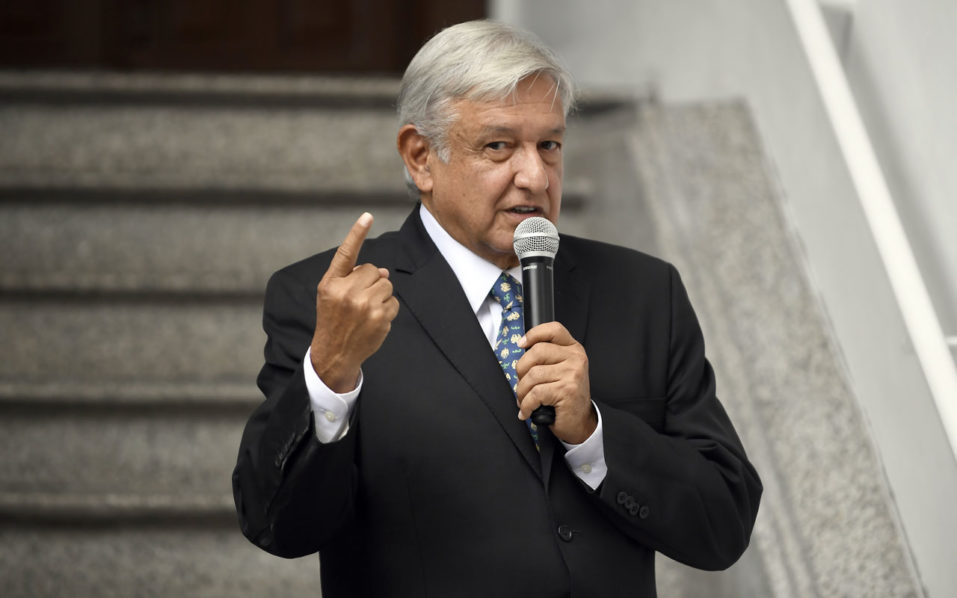 (FILES) In this file photo taken on July 31, 2018 Mexico’s President-elect Andres Manuel Lopez Obrador speaks during a press conference at his party’s headquarters in Mexico City. Mexico’s President-elect Andres Manuel Lopez Obrador vowed Monday August 6, 2018, his country would not be threatened by a wall, in a thinly veiled rebuke to US President Donald Trump’s jabs across the border. Obrador takes office December 1, 2018. / AFP PHOTO / ALFREDO ESTRELLA

In the middle of the street, corpses riddled with bullets. Underground, thousands of bodies heaped in clandestine graves. And in the mountains, drug gangs locked in armed conflict with the military.

These grim scenes have increasingly become the norm in Mexico, a country gripped by violence stemming from its war on drugs which since 2006 has seen more than 200,000 murders and 30,000 people gone missing.

So despite his bold promise of a “Mexico in Peace,” Enrique Pena Nieto will pass to leftist Andres Manuel Lopez Obrador this year a country with record homicide rates, disappearances and complaints against security forces over alleged extrajudicial executions and forced disappearances.

And battles with drug traffickers remain incessant: corpses are frequently found shot, dismembered, decapitated, hung from bridges, stashed in garbage bags, exposed on the streets or dumped in clandestine graves in states country-wide, even those that were considered safe a few years ago.

Mexico closed 2017 with 28,711 homicides, the highest official figure since the nation began such record-keeping in 1997.

This year looks even bleaker: the first half saw 15,973 murders, well over the 13,503 in the same period a year earlier.

That official number does not detail how many of these homicides are linked to organized crime, but a report by the NGO Semaforo Delictivo indicates most are carried out by narcotraffickers.

Countrywide insecurity
Wielding heavy weapons imported illegally from the United States, cartels fight among themselves to seize lands for the cultivation and transfer of drugs, whose primary destination is the United States.

AFP photographers recently documented insecurity in cities like touristy Acapulco, the US-Mexico border at Tijuana, cosmopolitan Mexico City, well-known Guadalajara and the emblematic Culiacan — the capital of Sinaloa, and the birthplace of Mexico’s top drug traffickers.

All of these places host frequent joint operations of military and police, as well as forensic experts donning special white suits at crime scenes taped off in yellow.

Residents of Guadalajara, Mexico’s second city, were shocked this weekend with the discovery of at least ten bodies in a clandestine grave inside a house.

And in Acapulco, formerly a favorite of the jet-set before becoming one of the country’s most dangerous cities, a police commander was killed last month, his colleague left wounded on the street.

The central state of Guanajuato — formerly home to much of the export-oriented manufacturing sector as well as many tourist destinations — has become the region with the most murders by drug traffickers, with 1,241 cases in the first half of 2018, according to Semaforo Delictivo.

And the morgues? Overflowing.