You are here
Home > asia > New Vietnam president sworn in after 99.8% vote 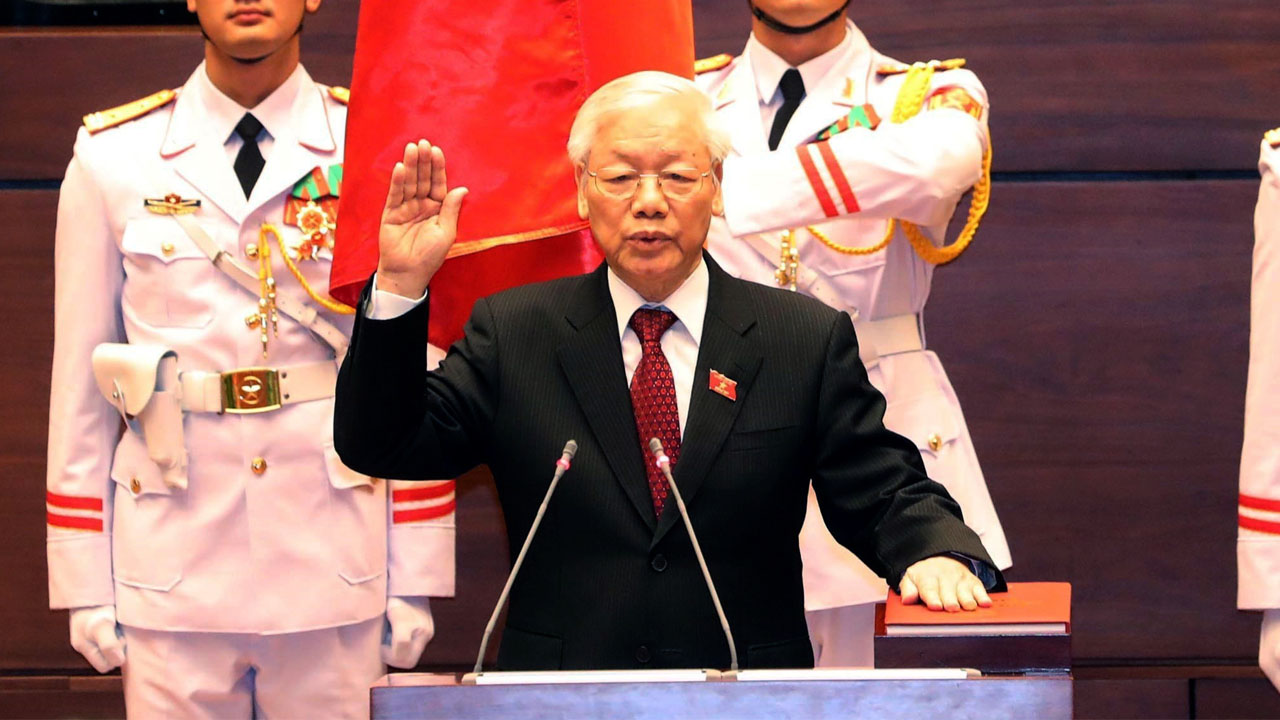 Vietnam communist party chief Nguyen Phu Trong takes oath as country’s president at the National Assembly hall in Hanoi on October 23, 2018. – Vietnam lawmakers on October 23, 2018 elected as president communist party chief Nguyen Phu Trong, the only candidate on the ballot, making him the most powerful man in the country where consensus leadership has traditionally kept strongman rule in check. (Photo by – / Vietnam News Agency / AFP)

Vietnam lawmakers on Tuesday elected as president Communist Party chief Nguyen Phu Trong, the only candidate on the ballot, making him the most powerful man in the country where consensus leadership has traditionally kept strongman rule in check.

Trong was ushered into his new role as head-of-state with 99.8 percent of the vote from Vietnam’s rubber-stamp parliament members a month after the former president died from a prolonged illness.

Though the president’s role is seen as largely ceremonial, 74-year-old Trong will maintain his position as party head — the first person to hold both roles since revolutionary leader Ho Chi Minh in the late 1960s.

His new position was cemented in a tightly orchestrated swearing-in ceremony on Tuesday after an overwhelming vote from 477 lawmakers, with only one vote against, according to the government’s website.

“I, president of Vietnam, vow to be completely loyal to the nation, people and constitution,” Trong said at the ceremony, speaking beneath a large bust of Ho Chi Minh.

“This is a very huge honour, while at the same time, a very heavy responsibility for me,” he added, acknowledging his advanced age.

His election comes as no surprise after the Communist Party’s Central Committee put his name forward as the only contender last month following the death of Tran Dai Quang, a former police chief who had been president since 2016.

Trong’s dual role in two of the so-called “four-pillar” top leadership positions allows him to yield a huge amount of power in the government whose inner workings are often shielded from the public.

The two other “pillars” are the prime minister and National Assembly chair.

His appointment is not likely to shake up politics in the one-party state, though observers have said it will eliminate any potential opposition to an anti-corruption campaign that he has spearheaded since his re-election as party chief in 2016.

The campaign has seen dozens of top officials, executives and bankers put behind bars, many seen as Trong’s political foes because of their perceived alliance to former prime minister Nguyen Tan Dung who was sidelined in the last leadership shuffle two years ago.

‘Politically unassailable’
Some say the campaign likely allowed Trong to secure the top job as president, an unlikely and rare move.

“Trong did this because he is currently in a politically unassailable position,” Zachary Abuza, a professor at the National War College in Washington, told AFP.

“(He) has effectively used ‘anti-corruption’ to purge rivals within the party,” he added.

Trong’s time in office has also coincided with a crackdown on dissidents, with more than 55 jailed this year alone, according to an AFP tally, that rights groups say shows no sign of abating.

The US ambassador to Vietnam congratulated Trong on the post-Tuesday, celebrating cosying ties between the former war enemies who are both seeking to counter China’s rising military and economic might.

“We look forward to continuing to work closely with President Trong on further strengthening and expanding the US-Vietnam Comprehensive Partnership,” ambassador Daniel Kritenbrink said in a statement.

In addition to running the powerful Communist Party, as president Trong will now be in charge of welcoming foreign delegates and travelling abroad as the public face of the administration.

The white-haired longtime party member has a carefully guarded reputation as a committed apparatchik and is also a member of the powerful politburo.