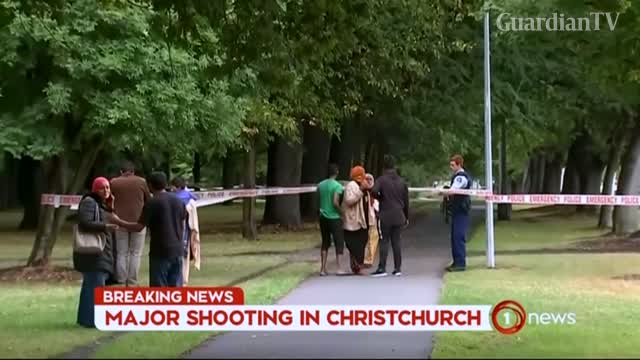 An Australian gunman involved in attacks on New Zealand mosques Friday that left at least 49 people dead published a racist manifesto on Twitter beforehand then live-streamed his rampage, according to an AFP online analysis.

The New Zealand government said it could be illegal to share the video, which showed the gunman repeatedly shooting at worshippers from close range.

“Police are aware there is extremely distressing footage relating to the incident in Christchurch circulating online,” New Zealand police said in a Twitter post.

“We would strongly urge that the link not be shared. We are working to have any footage removed.”

AFP analysed a copy of the Facebook Live video, which shows a clean-shaven, Caucasian man with short hair driving to the Masjid al Noor mosque in central Christchurch, then shooting as he enters the building.

AFP determined the video was genuine through a digital investigation that included matching screenshots of the mosque taken from the gunman’s footage with multiple images available online showing the same areas.

The manifesto detailing motivations for the attack was posted on Friday morning onto a Twitter account with the same name and profile image as the Facebook page that streamed the attack.

The title of the document has the same name as a conspiracy theory originating in France that believes European populations are being displaced in their homelands by immigrant groups with higher birth rates.

The manifesto said the gunman identified himself as an Australia-born, 28-year-old white male from a low-income, working-class family.

He said that key points in his radicalisation were the defeat of the French far-right leader Marine Le Pen in 2017 elections, and the death of 11-year-old Ebba Åkerlund in the 2017 Stockholm truck attack.

Australian Prime Minister Scott Morrison on Friday confirmed the attacker at the Masjid al Noor mosque was an Australian.

“We stand here and condemn, absolutely the attack that occurred today by an extremist, right-wing, violent terrorist,” Morrison told a press conference.

New Zealand authorities said that three people had been arrested, but their identities were not made public.

They later announced one man, aged in his late 20s, had been charged with murder and should appear in court on Saturday.

– Digital verification –
AFP confirmed the authenticity of the live-streamed video partly by matching the distinctive features at the mosque seen in the footage with images available online.

These included a fence, postbox and doorway at the entrance to the mosque.

Inside the mosque, the gunman’s footage showed distinctively patterned green carpet that also matched images tagged on Google Maps as being at the same location.

Satellite navigational audio could also be heard in the video as the gunman drove to the mosque, which AFP tracked on Google StreetView showing his route for the two kilometres (1.2 miles) leading there.

The gunman spoke only occasionally while in the car, speaking in what sounded like an Australian accent.

Distinctive writing on the gunman’s weapons seen in the footage also matched images posted on the Twitter account using the same name that posted the manifesto.

Photos of weaponry with distinctive writing on them were posted on the Twitter account on March 13. AFP took screenshots of the weapons shown in the Facebook Live video, which showed some of the exact same writing.

Scrawled in English and several Eastern European languages were the names of numerous historical military figures — many of them Europeans involved in fighting the Ottoman forces in the 15th and 16th centuries. A few took part in the Crusades, centuries earlier.

AFP downloaded the video and took screenshots of the Twitter account before they went inactive. AFP is not publishing any of the images.

A spokesman for New Zealand’s interior ministry said the video is likely to be classified as objectionable content under local law, and could be illegal to share.

“The content of the video is disturbing and will be harmful for people to see,” the spokesman said. “This is a very real tragedy with real victims and we strongly encourage people to not share or view the video.”