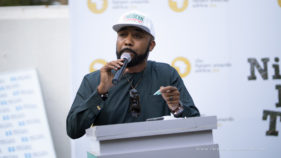 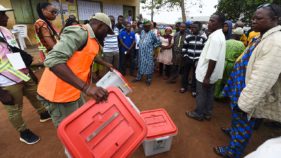 INEC to cancel polls where ballot boxes were snatched – REC 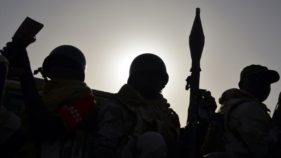 Nigeria Army said it has arrested about 15 armed men suspected to be political thugs in Ikebiri 1 in Southern Ijaw Local Government Area of Bayelsa State.

The army said the thugs had planned to disrupt the presidential and national assembly elections in the Southern Ijaw Local Government Area in the state.

A spokesman to Nigeria Army, Jonah Danjuma, noted that the arrest of the thugs by the troops of 5 Battalion, 16 Brigade was achieved on the objective of operation ‘Safe Conduct’.

“In our determined efforts to ensure peace and security in our Area of Responsibility especially in pursuant of the objectives of Operation SAFE CONDUCT, troops of 5 Battalion, 16 Brigade Nigerian Army today arrested 15 armed men suspected to be political thugs at Ikebiri 1 in Southern Ijaw Local Government Area of Bayelsa State,” Danjuma said in a statement.

“It was a successful operation that led to the recovery of large cache of arms, ammunition and other items. This feat was achieved as a direct response by vigilant troops in Operation SAFE CONDUCT 2019 in 16 Brigade Area of Responsibility.”

Danjuma said the arrested thugs would be handed over to the Nigerian police after initial interrogation for necessary action.

The army, however, said it remains committed “to ensure seamless conduct of the general election in support of the lead security agencies.”

Nigeria army called on the good people of the state to provide credible information on the activities of criminal elements in the society.