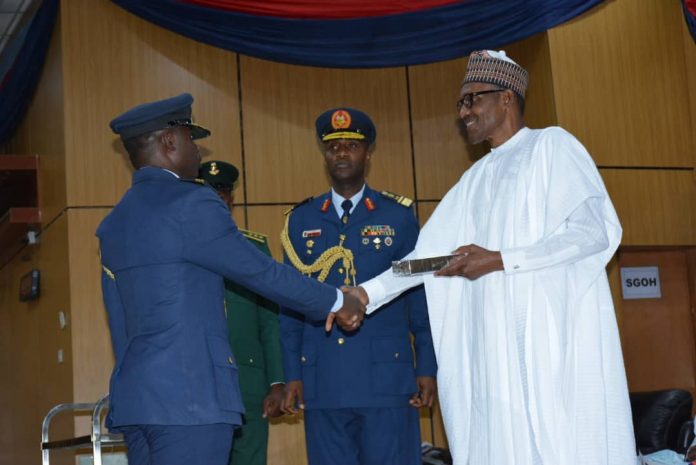 A Nigerian Air Force (NAF) officer, Squadron Leader Fredrick Oyenusi, has broken a twenty-year-old record in the force after winning the prestigious “Tie of Merit”, only awarded to a distinguished officer.

This feat by Squadron Leader Oyenusi’s feat was recognized during the graduation ceremony of Senior Staff Course 40, which took place at AFCSC Jaji, Kaduna.

The senior NAF officer, who is a C-130H aircraft pilot, holds 2 Masters degrees; one in Aerospace Vehicle Design and the other in Safety Engineering from Cranfield University and University of Aberdeen respectively.

Nigerian President Muhammadu Buhari, who was the Special Guest of Honour at the graduation ceremony restated the government’s commitment to prioritize the training of Armed Forces personnel, noting that they remained the bastion of national unity.

He also congratulated the graduating students and charged them to apply the knowledge they had acquired to make honest and useful contributions to national development.

The Senior Staff Course, in particular, is aimed at preparing selected officers of the rank of major and equivalent in the armed forces for higher responsibilities both in staff and command appointments.

The Chief of the Air Staff (CAS), Air Marshal Sadique Abubakar who expressed delight in the feat attained by Oyenusi said the officer reflected the 3 core values of the NAF namely “integrity first, service before self and excellence in all we do’’.

He promised that the current leadership of the NAF would sustain efforts at human capacity building as tangible dividends were being yielded for enhanced professional performance.