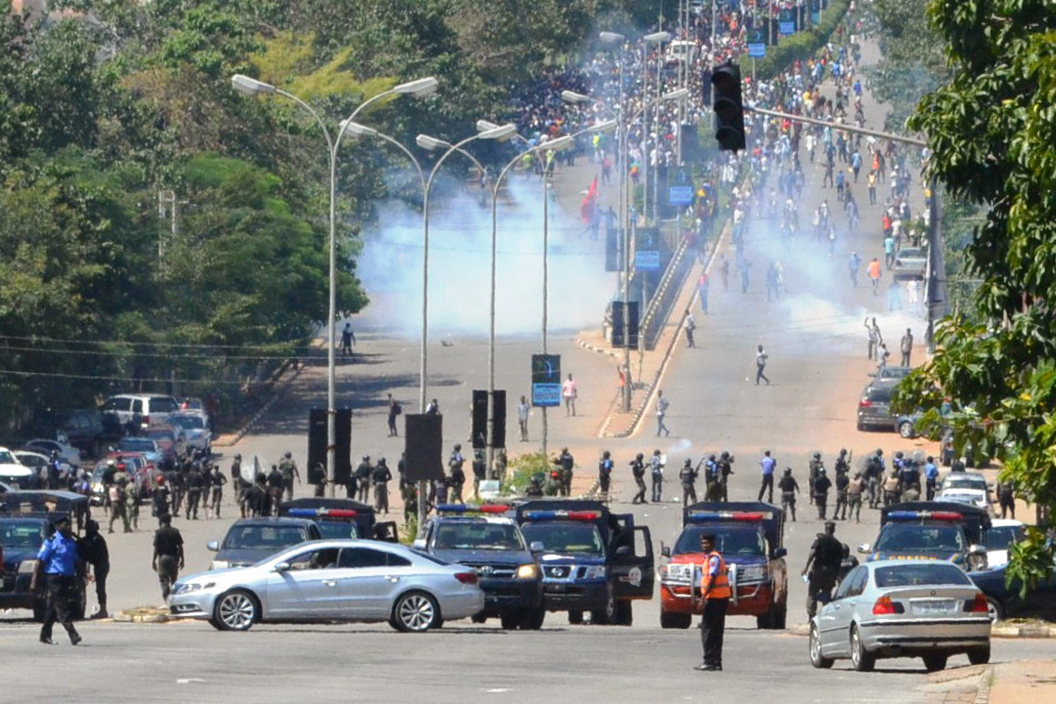 Nigerian police officers fire teargas at supporters of Islamic Movement of Nigeria (IMN) as they protest against the imprisonment of their leader Ibrahim Zakzaky, in Abuja, on October 30, 2018. – Nigerian police fired shots and tear gas at thousands of supporters of an imprisoned Shiite cleric in Abuja on October 30, 2018, just a day after three people were killed in similar clashes that sparked warnings to the government that a heavy-handed crackdown could radicalise the group. (Photo by SODIQ ADELAKUN / AFP)

The movement of a jailed Nigerian Shiite cleric whose followers have repeatedly been targeted by the authorities said on Wednesday security forces had killed 42 of its members during two days of violent crackdowns on protests in the capital Abuja.

Security forces opened fire with live ammunition on members of the Islamic Movement of Nigeria (IMN) who had marched in their hundreds to demand the release of their leader Ibrahim Zakzaky, jailed since 2015 when the army killed hundreds of his followers at his compound and a nearby mosque and burial ground.

The IMN raised its death toll on Wednesday from the two previous days’ violence to 42 from an earlier figure of 25. The toll included seven people who died of injuries received on Tuesday and 35 killed the previous day, said Ibrahim Musa, an IMN spokesman.

On Monday, the army opened fire on the marchers on the outskirts of Abuja. On Tuesday, the police shot at the protesters in the city centre, issuing a statement later that day saying 400 IMN members were detained. The statement did not mention any deaths.

Police and army spokesmen did not respond to phone calls seeking comment on the updated death toll. The army has said that three IMN members were killed on Monday.

Zakzaky was charged in April this year with murder over the 2015 violence, after being held for more than two years. Authorities ignored a court ruling during the period before he was charged that he be released, sparking protests from his followers.

IMN protests have frequently been met with force. In April, police fired bullets and tear gas during days of protests by IMN, wounding at least four protesters.

President Muhammadu has in the past accused the Shi’ites of creating “a state within a state”, though he said at the time that civilian deaths could not be justified. Since then, however, the government has remained largely silent on accusations it has used excessive force against the group.

Around half of Nigeria’s 190 million people are Muslims. Although virtually all of them are Sunnis, Zakzaky has attracted an estimated 3 million followers as a preacher of Shi’ite Islam since being drawn to that sect by the 1979 revolution in Iran.

The repression of IMN and detention of its leader have drawn criticism from international human rights watchdogs and raised concern that the group could become radicalised, just as the Sunni Muslim militant group Boko Haram turned into a violent insurgency in 2009 after police killed its leader.