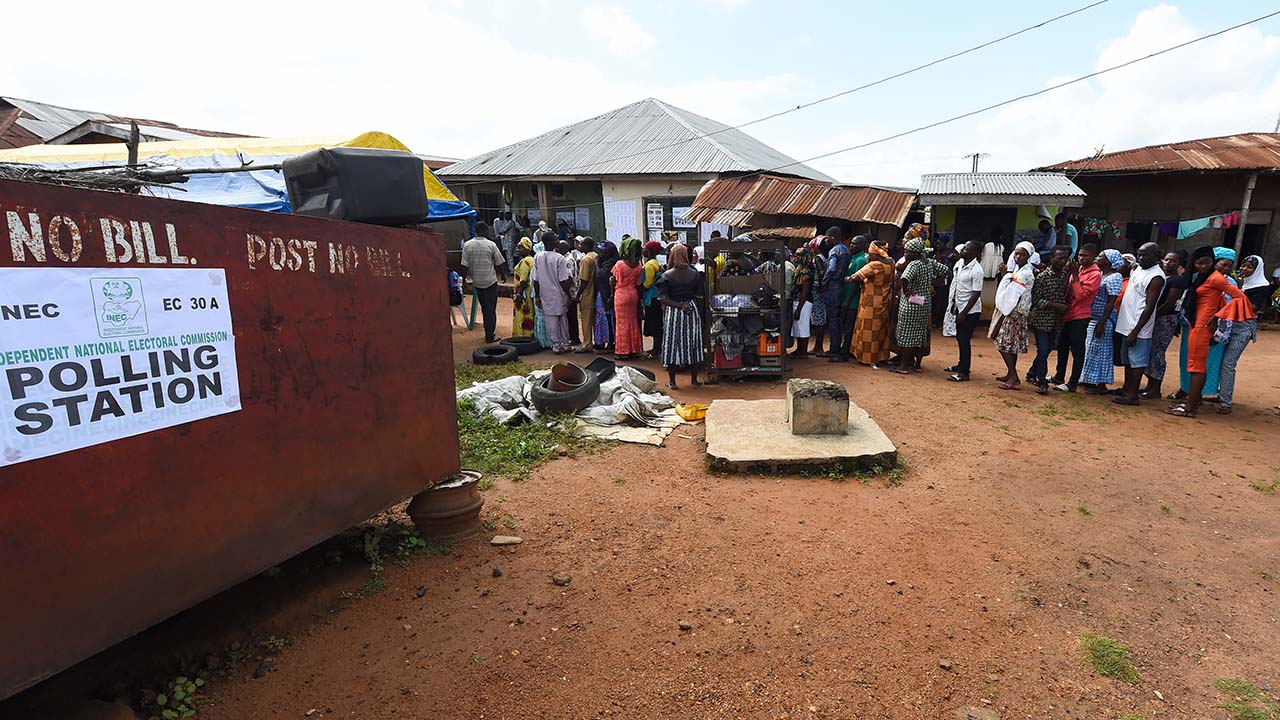 Nigerians wait to cast their votes at a polling station during the Osun State governorship election in Ede, southwest of Nigeria, on September 22, 2018.<br />Voters in the southwestern state of Osun went to the polls to elect a new governor amid growing concerns about free and fair voting, six months ahead of a presidential election. / AFP PHOTO / PIUS UTOMI EKPEI

Voters in the southwestern Nigerian state of Osun went to the polls on Saturday to elect a new governor amid growing concerns about free and fair voting, six months ahead of a presidential election.

The Osun vote is seen as a litmus test for President Muhammadu Buhari’s popularity as he seeks a second term in February.

Voting opened in most polling booths in Osun around 8.00 am (0700 GMT) with long queues of voters in Osogbo, the state capital, and other towns and villages across the state.

“You can see that people are already exercising their civic responsibility,” electoral official Sodipo Oladapo told AFP in the capital.

“All those on the queue will be accredited and allowed to vote until 2:00 pm when the exercise will end,” he said.

There was a large turnout as long lines were still observed in some centres after the stipulated time.

Electoral officials said those already in queues before 2:00 pm would vote, while voting had ended in a few centres.

According to the Independent Electoral Commission of Nigeria (INEC), 1.2 million voters are eligible to vote for the candidates of 48 political parties participating in Saturday’s vote.

Osun is part of Nigeria’s southwest which includes the economic capital Lagos and a region crucial to Buhari’s re-election as he faces a formidable challenge from an array of high-profile opposition candidates.

The leading candidates jostling for the Osun governor’s seat include Gboyega Oyetola of Buhari’s All Progressives Congress (APC) and Ademola Adeleke, nicknamed “the dancing senator” because of his penchant for dancing in public.

– ‘Votes for peanuts’ –
Adeleke is the candidate of the main opposition Peoples Democratic Party (PDP).

He is also an uncle of Nigerian Afropop star Davido, whose real name is David Adedeji, and from a wealthy and political family in Ede, some 20 kilometres from the capital.

Though Davido was not around to vote, his father, Adedeji Adeleke and the PDP voted in the town.

The winner of the election will replace APC Governor Rauf Aregbesola, who is stepping down after two four-year terms, the legal maximum.

Osun INEC chief Olusegun Agbaje said voting materials and personnel had been distributed to all the 30 local government areas for a “hitch-free exercise” and security provided for election officials, materials and voters was adequate.

He urged voters to come out and avoid any form of financial inducement.

“The commission has done a lot to put things in place. People should be free to exercise their franchise.

Any act of vote-buying will be met with the appropriate sanctions,” he said.

He said that offenders risked up to one year in jail.

“We have enough men on ground to deal with those willing to sell their votes for peanuts,” he warned.

But local and observers who had earlier voiced about inducement, lauded the conduct of the exercise.

“It’s being a peaceful environment. There was great ethusiasm among the people as they came out in large numbers,” said Clement Nwankwo, the convener of the Nigeria Civil Society Situation Room coalition of civic groups.

He said the vote was an improvement over previous ones characterised by vote-buying, intimidation and logistics problems.

“Majority of the voting centres opened early and everything went on well,” he added.

Nwankwo the collation and counting of votes should be transparent with the presence of the stakeholders, including party agents.

Another observer, Mejuru Lawrence of the Abuja-based Advocacy for Good Leadership group, said the electoral body should be given “a pass mark” for the success of the polls.

“The process has been credible and orderly,” he said, adding that INEC and the security agencies should sustain the momentum in next’s year general election.

The last gubernatorial vote in the southwestern state of Ekiti in July led to widespread concerns about vote-buying by the leading political parties.