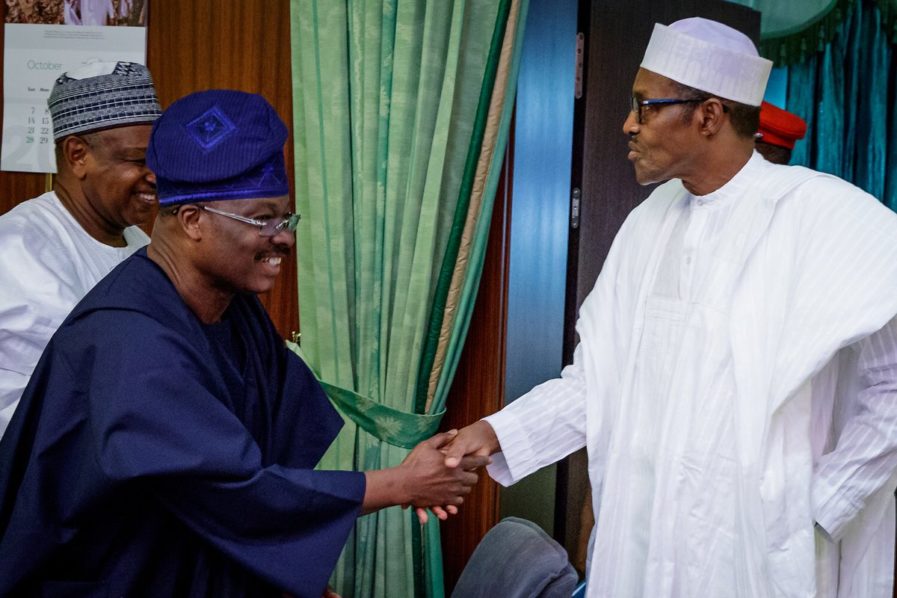 President Buhari received a delegation of APC Governors at the State House… October 4, 2018

Governors elected on the platform of the All Progressives Congress (APC) stormed Aso Rock yesterday for emergency talks with President Muhammadu Buhari.

The visit followed a turbulent conduct of the party’s primaries across the country and concerns by the governors that they have been deprived of their powers to influence political trends in their states.

Their action calls to mind a similar intervention last year when trouble over the party’s mid-term convention and the fate of the Chief John Odigie-Oyegun National Working Committee (NWC) rocked the boat.

Although the governors volunteered to fund the convention, their suggestion was overtaken by the discovery that the tenure of the NWC members was drawing to a close.

This time, attempt by the party to select its candidates, preparatory to next year’s election, through the contentious direct primary method, is causing disquiet among contending interests.

As at press time, about 13 states were enmeshed in crises, ranging from factional primaries to fraudulent outcomes of governorship and National Assembly primaries.

Notable among these states are Kaduna, where the incumbent, Mallam Nasir El-Rufai and the Senator representing Kaduna Central Senatorial District, Shehu Sani, are entangled in political warfare.

In Imo State, where the chairman of the Progressives Governors is serving out his second term, his attempt to impose his son-in-law and his desire to retire to the Senate have unsettled the party, resulting in the declaration of dual winners of dubious primaries.

The governors also seemed to be embarrassed by the offhand manner one of their own, the incumbent governor of Lagos State, , was displaced in a controversial primary that was not supervised by the party’s oversight committee sent from Abuja, but was upheld by the NWC.

The national chairman, Mr. Adams Oshiomhole, who also held a meeting with the governors, told journalists that concerning the troubles over primaries in Zamfara, Ogun, FCT and Imo States, there was no going back on the party’s resolve to conduct the governorship and National Assembly exercises through direct primary.

Oshiomhole insisted that the outcome of the Ogun State exercise could not stand because it was not conducted in line with the stipulated guideline.

“We came to review the various crises characterising our primaries, especially the APC, with a view to finding solution.

So, we are looking for a way out in this regard. We are going to find solution. Our party believes in justice, equity and fairness. We are requesting, let the right thing be done and let everyone contest the elections,” he said.

Akeredolu and El-Rufai had visited State House the previous day, although their mission was not disclosed.

It has been gathered meanwhile that Buhari will be roundly endorsed as the presidential candidate of the party during its convention in Abuja tomorrow.

This fact came to light after a section of the party’s 21 governors met behind closed doors with the NWC, in a last minute effort to ensure cohesion among APC supporters.

Amosun, who chairs the 21-member convention committee, assured that the event would hold as scheduled, notwithstanding the differences among party faithful.

The governor, who is contending with a rival faction in his state, admitted that his parley with Oshiomhole was at the instance of Buhari.

“You know that as politicians, we are in a season of politics. And it happens every four years like this.

Everybody will be manoeuvering to get the party’s ticket. I think that this is just what has happened.

As a party that is popular, you will expect this because people have taken APC as theirs.

In processes like these, there will be what I call disagreement, which leads to agreement,” he said.

Okorocha, optimistic the crises rocking the party in his state would be resolved, assured that Buhari would be endorsed.

He said: “We are on the party’s primaries. You know that it comes with issues and challenges, especially in our democratic structures.

APC has some few challenges in some few states and we have come to soften the rough edges, so that we can rebuild unity in the party. That is what brought us here.

In some states where there are issues, we have come here to look at what to do.

“Part of the reason we are here is because of reconciliation. We shall make sure everybody is in one place because we do not want to give the Peoples Democratic Party (PDP) an edge whatsoever.

We will be able to sort out our own crisis as quickly as possible before the main election.

But what is important is that, despite our individual differences, we still believe in President Muhammadu Buhari.”

Also optimistic, Bagudu said: “We believe it will all go well. We have done very well. It is a human process.

And there are bound to be issues and challenges in one or two places, because it is a dynamic process.

It will be resolved. I am quite pleased with what is happening. We are ready.

Tomorrow, we will be on our way to participate in the last legal act of making President Muhammadu Buhari the 2019 presidential flag bearer of the APC.

Yari, who expressed displeasure over the cancellation of the governorship primary in his state, said: “We came to see our national chairman over matters arising from the primaries conducted in some states and also to resolve them, so that we can come out stronger as one family, so that we can be able to secure the 2019 general election.”