You are here
Home > #NigeriaDecides2019 > No more campaigns, collection of PVCs — INEC 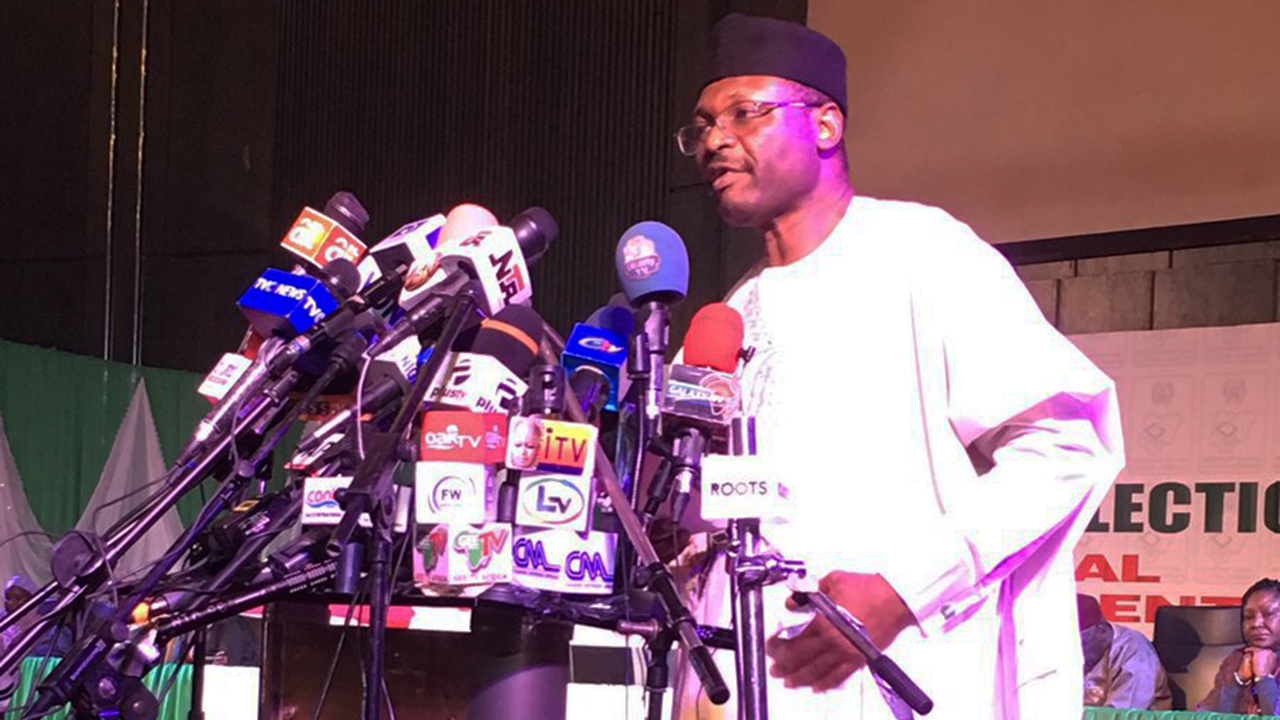 INEC Chairman, Prof Yakubu Mahmood and Members of the Commission in a Meeting with Key Stakeholders On updates of the 2019 General Elections.

The Independent National Electoral Commission (INEC) says there is no more room for political campaigns or collection of Permanent Voter Cards (PVCs) in spite of the postponement of elections by one week.

The Chairman of INEC, Prof. Mahmood Yakubu, made the disclosure while fielding questions at the Commission’s meeting with stakeholders, on Saturday in Abuja.

Yakubu said that the deadline for the collection of PVCs and election campaigns by political parties according to the election timetable had passed.

“Campaigns closed on Thursday, Feb. 14, and for the period that remains campaigns remain closed.

“All the other processes that remain in the main timetable remain closed, including the collection of PVCs, except the conduct of the elections,” he said.

On why the Commission did not consult party leaders before adjusting the dates, Yakubu said that it was due to the urgency, pointing out that Section 36 of the Electoral Act empowers INEC to do so.

“We have to take a decision and communicate because polls were supposed to open at 8a.m. and we took the decision at 2a.m.,” he said.

Yakubu while answering a question on why the Commission waited till about 3a.m on Saturday before postponing the elections, said that up until 2a.m. the Commission was still hopeful that elections would hold as scheduled.

On request that INEC should compensate political parties for the change in dates, Yakubu said that INEC did not finance parties.

The National Chairman of the All Progressives Congress (APC), Mr Adams Oshiomhole, expressed displeasure that INEC waited until few hours before the elections to announce the postponement.

Oshiomhole demanded an apology from Yakubu to Nigerians and political parties.

He said the postponement entailed huge losses to political parties who had no public funds to fall on like INEC.

Oshiomhole said if the postponement was done on time, the losses and inconveniences to political parties would have been avoided.

“Serious inconveniences have been caused, Nigerians have been subjected to rude shock and I felt extremely cold.

“I think we should be honest. I am shocked, disappointed and disgusted.

“The real question I will insist, Mr Chairman by all due respect, is to tell us why by Wednesday you did not announce the postponement since you acknowledged that the weather was bad.

“You should have taken all these into account and announced this postponement at least 48 hours before the elections time so that political parties do not have to mobilise resources across 176,000 polling units.

“Observers will stay where they were and a lot of inconveniences would have been saved,” Oshiomole said.

Chidoka requested INEC’s assurance that Activate Technologies Limited, one of the companies producing the Permanent Voter Cards (PVCs), would not be involved in the retrieval and reconfiguration of card readers to be used for the rescheduled elections.

He said that available information was that the Managing Director of the company was a senatorial candidate of APC in Niger.

He also requested that the Commission should allow independent verification that sensitive materials to be returned to Central Bank of Nigeria for safe keeping had not been opened or tampered with.

The National Chairman, Progressive People’s Alliance (PPA), Chief Peter Ameh, said initially he was angered that INEC did not consult political parties like it was done before change of election dates in the past.

Ameh, who is also the National Chairman of the Inter-Party Advisory Committee (IPAC), however, said that with the explanation by INEC Chairman, it was clear that the decision was taken in the interest of the nation.