Leaders of North America’s bid for the 2026 World Cup urged FIFA voters to ignore the “politics of the moment” on Tuesday as they promised to deliver a record-breaking multi-billion-dollar profit for the global football showpiece. 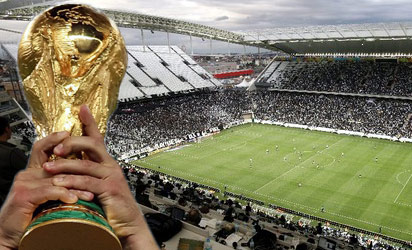 “I can announce today that, working with FIFA, we expect that a 2026 World Cup in North America would generate a new record: more than $14 billion in revenue for FIFA,” said Cordeiro, one of the three co-chairs of the bid.

“This includes profits for FIFA of nearly $11 billion. In other words, the most successful and profitable FIFA World Cup ever,” Cordeiro added in prepared remarks to AIPS delegates.

The US-Canada-Mexico joint bid is battling against a rival bid from Morocco for the right to stage the 2026 tournament. FIFA members will decide the winner of the bidding race at a vote in Moscow on June 13.

Long seen as the clear front-runner for 2026, the North American bid is facing an increasingly stiff challenge from Morocco, which is bidding to become only the second African nation to host the World Cup.

Cordeiro’s remarks on Tuesday sought to underscore the commercial appeal of staging a World Cup in North America at a time when FIFA President Gianni Infantino is keen to boost revenue for world football’s ruling body.

A source told AFP earlier this month that FIFA has spent $600 million of its financial reserves in the past three years.

Infantino, who is said to favour the North American bid, also hopes to oversee the creation of a money-spinning FIFA Club World Cup.

– Media bonanza? –
Cordeiro also projected a sponsorship bonanza, with Fortune 500 companies eager to sign on for the World Cup, leading to another $3.6 billion.

Although Morocco’s bid has emphasised that its time zones make it attractive for European television schedules, Cordeiro said media revenues from a North American World Cup would top $5 billion for the first time.

“Above and beyond that, the television rights from our United Bid — and our bid alone — would deliver a $300 million guaranteed bonus payment to FIFA and global football,” he added.

Meanwhile, Cordeiro made a veiled reference to recent remarks by US President Donald Trump, who last month appeared to warn unnamed countries not to lobby against the North American bid.

“It would be a shame if countries that we always support were to lobby against the U.S. bid,” Trump wrote on Twitter. “Why should we be supporting these countries when they don’t support us (including at the United Nations)?”

Trump’s intervention, which followed disparaging remarks made by the US leader towards some countries in the Caribbean and Africa earlier this year, were viewed as potentially damaging for North American bid chiefs as they attempt to woo FIFA voters from more than 200 countries.

However Cordeiro on Tuesday said he hoped FIFA members would set aside politics when they go to vote next month.

“Let me acknowledge upfront that, as with many international bids over the years, the question of who will host in 2026 has at times become mixed with geopolitics,” Cordeiro said.

“We are asking that we be judged, not on the politics of the moment, but on the merits of our bid.”