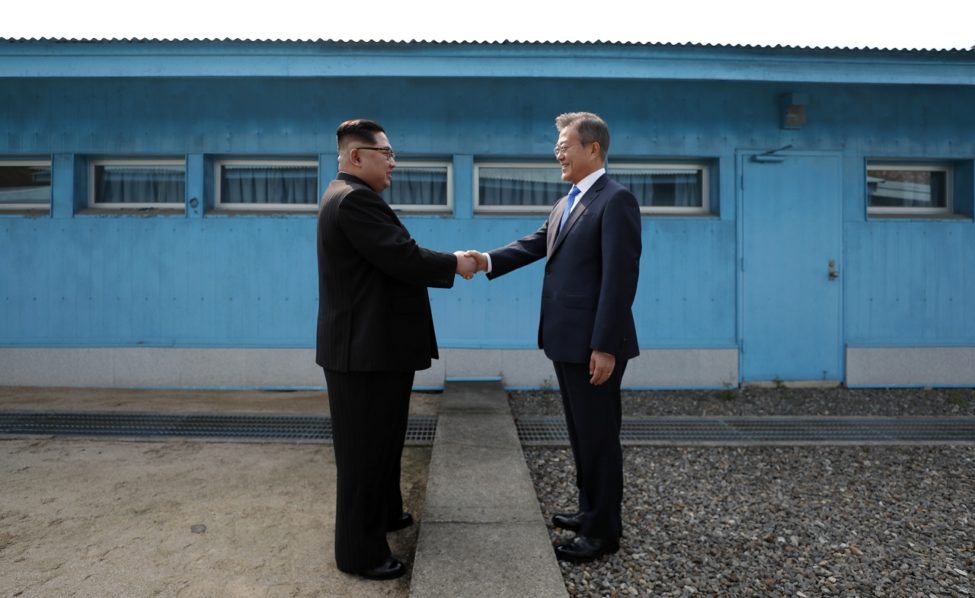 North Korea’s leader Kim Jong Un (L) shakes hands with South Korea’s President Moon Jae-in (R) at the Military Demarcation Line that divides their countries ahead of their summit at the truce village of Panmunjom on April 27, 2018. North Korean leader Kim Jong Un and the South’s President Moon Jae-in sat down to a historic summit on April 27 after shaking hands over the Military Demarcation Line that divides their countries in a gesture laden with symbolism. / AFP PHOTO / Korea Summit Press Pool / Korea Summit Press Pool

The leaders of the two Koreas held a landmark summit Friday after a highly symbolic handshake over the Military Demarcation Line that divides their countries, with the North’s Kim Jong Un declaring they were at the “threshold of a new history”.

Kim said he was “filled with emotion” after stepping over the concrete blocks, making him the first North Korean leader to set foot in the South since the Korean War ended in an armistice 65 years ago.

At Kim’s impromptu invitation the two men briefly crossed hand-in-hand into the North before walking to the Peace House building on the southern side of the truce village of Panmunjom for the summit — only the third of its kind since hostilities ceased in 1953.

“I came here determined to send a starting signal at the threshold of a new history,” said Kim, whose nuclear-armed regime is accused of widespread human rights abuses.

With the North’s atomic arsenal high on the agenda, South Korean President Moon Jae-in responded that he hoped they would reach “a bold agreement so that we may give a big gift to the whole Korean people and the people who want peace”.

Kim was flanked by his sister and close adviser Kim Yo Jong and the North’s head of inter-Korean relations, while Moon was accompanied by his spy chief and chief of staff.

It is the highest-level encounter yet in a whirlwind of nuclear diplomacy, and intended to pave the way for a much-anticipated encounter between Kim and US President Donald Trump.

The North’s official KCNA news agency said that Kim will “open-heartedly discuss… all the issues arising in improving inter-Korean relations and achieving peace, prosperity and reunification of the Korean peninsula”.

But it did not mention denuclearisation, and as images of the leaders’ handshake were beamed around the world, the North’s state television showed only a test card.

Last year Pyongyang carried out its sixth nuclear blast, by far its most powerful to date, and launched missiles capable of reaching the US mainland.

Its actions sent tensions soaring as Kim and Trump traded personal insults and threats of war.

Moon seized on the South’s Winter Olympics as an opportunity to broker dialogue between them, and has said his meeting with Kim will serve to set up the summit between Pyongyang and Washington.

The White House said it hoped the summit would “achieve progress toward a future of peace and prosperity for the entire Korean Peninsula”.

Trump has demanded the North give up its weapons, and Washington is pressing for it to do so in a complete, verifiable and irreversible way.

Seoul played down expectations before the summit, saying the North’s technological advances in its nuclear and missile programmes made the summit “all the more difficult”.

After the morning session, Moon’s spokesman Yoon Young-chan said the two leaders had had a “sincere and frank dialogue over the denuclearisation of, and the establishment of permanent peace on the Korean peninsula”.

Peace and denuclearisation
Pyongyang is demanding as yet unspecified security guarantees to discuss its arsenal.

When Kim visited the North’s key backer Beijing last month in only his first foreign trip as leader, China’s state media cited him saying that the issue could be resolved, as long as Seoul and Washington take “progressive and synchronous measures for the realisation of peace”.

In the past, North Korean support for denuclearisation of the “Korean peninsula” has been code for the removal of US troops from the South and the end of its nuclear umbrella over its security ally — prospects unthinkable in Washington.

Moon said he hoped they would have further meetings on both sides of the peninsula, and Kim offered to visit Seoul “any time” he was invited.

But Robert Kelly of Pusan National University warned that Pyongyang “hasn’t really changed, and it hasn’t offered a meaningful concession yet”, adding there were still “huge” strategic and political divisions between the North on one hand, and the South and the US on the other.

Yonsei University professor John Delury said the post-summit statement will give “a lot of chance to analyse every word, (read) between the lines, look for things that are there and not there”.

But it also said it had completed the development of its weapons and had no need for further tests.

Tree planting
Seoul has also promoted the idea of opening talks towards a peace treaty to formally end the 1950-53 Korean War, when hostilities stopped with a ceasefire, leaving the neighbours technically in a state of conflict.

Reunions of families left divided by the war could also be discussed at the summit, and Moon told Japanese Prime Minister Shinzo Abe he would raise the emotive subject of Japanese citizens kidnapped by the North.

After a morning session lasting an hour and 40 minutes, Kim crossed back to the North for lunch, a dozen security guards jogging alongside his limousine.

Before the afternoon session, Moon and Kim were to hold a symbolic tree planting ceremony on the demarcation line.

The soil will come from Mount Paektu, on the North’s border with China, and Mount Halla, on the South’s southern island of Jeju.

After they sign an agreement, a joint statement will be issued, with a banquet attended by the leaders’ wives to follow in the evening and a farewell before Kim returns to the North.