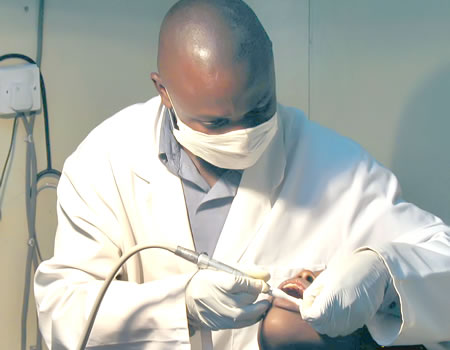 For Stella Haruna, the pain started after breaking a bone in a plate of pepper soup she was served at a party. The pain became worse over the night and she was forced to go the dentist where she was told that she had broken a tooth.

Mrs Ngozi Nwanchukwu always avoids drinking or eating any food or drink that is hot or cold to prevent aches in her teeth. “It started five years ago as a dull pain around my teeth. Now, it feels like a shock of cold or sudden pain that comes on quickly and goes away,” she complained.

Toothaches are one of the leading reasons that people visit the dental clinic. They can range from mildly annoying to downright debilitating. When considering a toothache– which is pain in or around the tooth– most people assume the cause is tooth decay, or a cavity.

Tooth decay, also known as dental caries, is a breakdown of teeth due to acids made by bacteria. The acid is produced by the bacteria when they break down food debris or sugar on the tooth surface.

Decay is a progressive tooth disease caused when enamel is compromised and the tooth is exposed to harmful oral bacteria. A cavity is the hole that forms in the tooth as the decay works its way through the tooth structure.

As the decay gets larger, it may cause signs and symptoms such as toothache, tooth sensitivity, mild to sharp pain when eating or drinking something sweet, hot or cold and a visible holes or pits in the teeth.

Nonetheless, beyond tooth decay, many other things can cause a tooth ache. According to Dr Opeyemi Sigbegu, a consultant oral pathologist at the University College Hospital, UCH, Ibadan, many other problems including infections, bruxism, gum disease and sores, many individuals assume to be tooth ache.

Toothache symptoms can be caused by a problem that does not originate from a tooth or the jaw. Sometimes, symptoms of toothache can be mimicked by sinus infection, shingles, and other diseases.

Certificate of Return: Okorocha is on his own ― APC

However, he said that with increasing destruction of the enamel, the hard covering of the tooth, the individual starts to feel this sharp pain or sensation that most people may not count as anything unless it is intense.

“We all have different pain threshold; some people have acclimatized to it; they just feel no pain,” he added.

Nonetheless, he said that at the dental clinic any complaint of pain in the mouth is thoroughly examined to determine its kind as well as how and when it occurs.

In a case where the pain is due to gum diseases, he said at the initial stage the gums may be red and swollen due to bacteria built up in plaque. If this is left untreated, the gum disease can ultimately result in the loss of teeth.

Signs of gum disease include bleeding gums, particularly during tooth brushing; gum recession; foul-smelling breath; gums that are swollen, red, or tender as well as teeth that are loose or shifting.

In some situations, toothache can be caused by an injury. The injury can range from relatively mild, such as a slightly chipped tooth, to an injury that causes one or more teeth to completely dislodge.

He declared that crack or broken tooth can be caused by a number of events, but the most common culprits are accidents and sports-related injuries and chewing on hard objects.

In addition, he said in some situations the toothache may be due to an abscess in the tooth, a severe infection located at the root of the tooth or in between the gum and the tooth.

According to Dr Sigbeku, this painful infection can be caused by a number of factors including severe tooth decay, injury to the tooth, and gum disease. The infection can also spread from the root of the tooth to the surrounding bones.

Some of the symptoms of an abscess of the tooth include fever, severe and persistent tooth pain, swollen lymph nodes in the neck, a general feeling of being ill or uncomfortable, foul-smelling breath and tooth sensitivity, specifically to hot or cold food and drinks and a pimple- or boil-like bump on the gums.

Most people clench or grind from time to time without any ill effects. However, frequent tooth clench or grind, a condition medically termed bruxism, he said, wears down the protective enamel, leaving the dentin layer exposed, thus causing extreme tooth sensitivity and even pain.

Bruxism can also cause teeth to fracture, and if left untreated, can ultimately result in tooth loss. Its common symptoms include tight jaw muscles, face, neck, or upper back pain and disrupted sleep due to nighttime bruxism. Others are tooth sensitivity and flattened, chipped or fractured teeth.

However, he warned that all toothache require prompt visit to a dentist, especially when the ache is severe, interfering with performance of daily activities and associated with ear pain, difficulty opening the mouth wide or headache.

“Where a toothache that is accompanied with fever, which is an indication of a possibly infection, is left untreated, infections can spread to the blood stream,” he added.

Dr Sigbeku warned against the use of topical numbing ointment designed for the mouth like ‘Touch and Go’ when experiencing toothache, saying it is better to seek treatment from a dentist.

He advised regular dental check-ups to achieve optimum dental health and the best smile, adding that tooth decay is much easier and cheaper to treat in its early stages.

The post Not every hole in the tooth gives pain —Expert appeared first on Tribune Online.