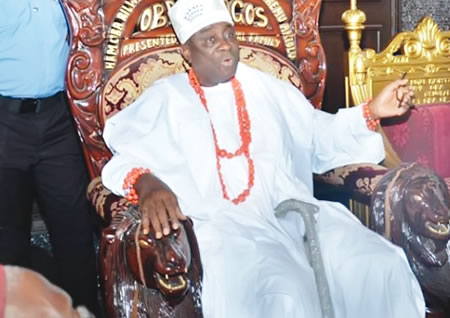 Justice A. Candide Johnson of an Ikeja High Court on Friday dismissed a suit seeking to oust Rilwan Akiolu, as the Oba of Lagos.
Justice Candide Johnson held that the claimants, Prince Adedoyin Adebiyi and Prince Rasheed Modile, two members of the Lagos royal family, failed to prove their case.
The Judge ruled that the claimant failed to prove their case and that what they tendered as evidence was incoherent, full of inconsistencies.
“I hereby hold that the kingship of Oba Rilwan Akiolu of Lagos is legitimate, lawful and valid.
The Judge had earlier on ruled that the court lacked the jurisdiction to upturn long-established custom of over 200 years for enthroning the Oba of Lagos and that what the claimant had attempted to do with the suit is a burning desire to overturn succession of over 239 years.
According to him, the ruling house of Ologbokutere has produced the Oba of Lagos in the past 223 years.
Akiolu’s title is being challenged by Prince Adedoyin Adebiyi and Prince Rasheed Modile who are both of the Akinsemoyin Ruling House of Lagos.
It would be recalled that Adebiyi and Modile were candidates chosen by the Akinsemoyin Ruling House to contest the Obaship title in 2003 after the demise of Oba Adeyinka Oyekan, the then Oba of Lagos in 2003.
They lost the race to Akiolu who they alleged had no rightful claim to the throne.
Joined in the suit as respondents are the state governor and the Attorney-General of Lagos State, Prince Awobade Pearse,
Others are the representative of the Ologun Kutere Ruling House and Chief J.J Junaid – Eko and the head of the traditional white cap chiefs of Lagos.