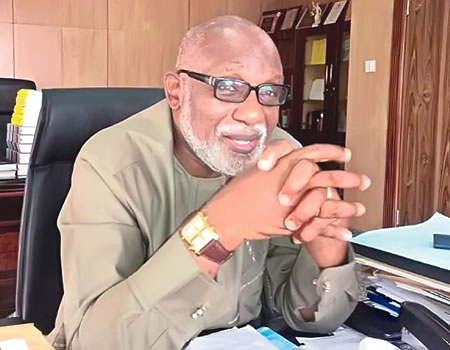 The Governor of Ondo State, Governor Mr Rotimi Akeredolu, on Tuesday said birth certificate has become a criterion for enrolment of pupils into primary schools and for children under the age of five to access free medical treatment in the state.

Akeredolu who stated this during the Stakeholders meeting on birth registration tagged “Accelerated Birth Registration” initiated by his wife, Mrs Betty Akeredolu, said the steps became necessary to assist the state in planning for the future of the children.

According to him, lack of well-functioning birth registration system had made it impossible for both Federal and State government to adequately plan for its citizen, especially young children.

He said apart from this, the birth certificate would provide documentary evidence required for relevant occasions, such as school enrolment, voting and graduation saying this will give right of identity to the children.

He, therefore, called on community leaders to play a positive role in ensuring that new birth is registered in their communities while he called for synergy with the National Population Commission (NPC) and Ondo State Primary Health Care Development Board to ensure accelerated birth registration in the state.

Speaking on the need for true registration, Mrs Akeredolu, described the registration of the birth as the first right of a child that gives the child access to many other state privileges.

She said the initiative became necessary to ensure that every child  registered are planned for by the government, saying “they will enjoy every infrastructure and amenities set up by the government.”

Mrs Akeredolu noted that 62 per cent of the children in Nigeria are not registered and are therefore without identity while she disclosed that only 68 per cent of children under five years were registered.

According to her, lack of birth certificate contributed to the lack of access to education and social amenities for children.

She said “it is very sad to note that in our country, the birth of more than half of children under age five are not registered while only one woman out of four women who has a child under five knows the procedure of registering the birth of that child.

“This suggests that almost half of under-five children in Ondo state are not considered in socio-economic planning and are therefore at risk of  lacking access to basic social amenities that can ensure adequate child development but we resolute to change the tides this year.”

Mrs Akeredolu, however, advocated for the coming together of all stakeholders to chart a course on how to find boundless joy to the children

Speaking earlier, the State Commissioner for Health,  Alhaji Wahab Adegbenro, said no fewer than one million children in the state had not been registered.

Adegbenro called on mothers, community leaders, and stakeholders to join hands together to ensure all the children are registered.