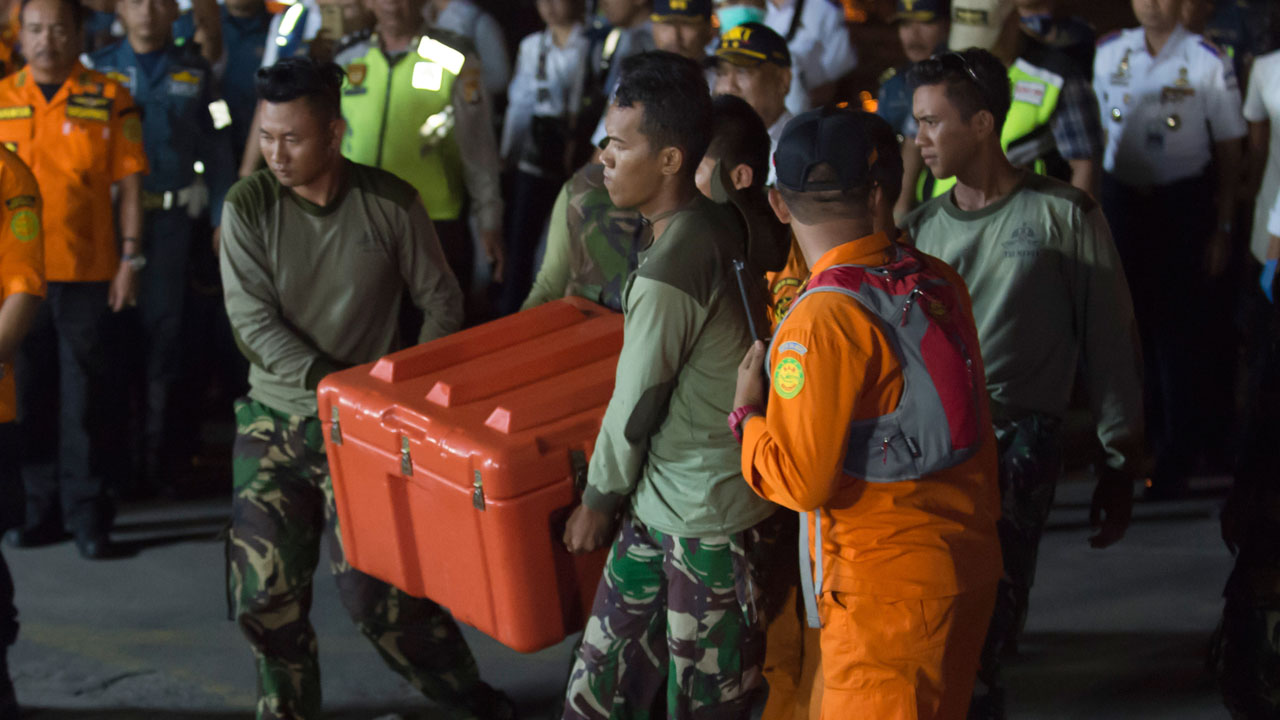 Members of a rescue team carry the flight data recorder, part of the ill-fated Lion Air flight JT 610’s black box, after it was recovered from the Java Sea, at Jakarta port on November 1, 2018. – A black box from the crashed Lion Air jet has been recovered, authorities said on November 1, a find that could be critical to establishing why a brand new jet plunged into the Java Sea shortly after take-off, killing 189 people on board. (Photo by BAY ISMOYO / AFP)

A black box from the crashed Lion Air jet has been recovered, authorities said Thursday, a find that could be critical to establishing why a brand new jet plunged into the Java Sea shortly after take-off, killing 189 people on board.

Divers plucked the orange data recorder from the ocean and placed it in a plastic tub as search teams continued to scour the seabed for the fuselage of the Boeing-737 MAX 8, which crashed off Indonesia’s northern coast on Monday and had only been in service a few months.

There have been no survivors and only body parts have been found so far.

Relatives are desperate to be able to say goodbye to their loved ones and the first funeral for one of the passengers was held on Thursday.

But many others have yet to be located and analysts hope further victims could still be found with the bulk of the wreckage.

“I assume that there will be a lot of bodies still strapped into the seats,” aviation analyst Dudi Sudibyo told AFP.

Dozens of divers are taking part in the massive recovery effort along with helicopters and ships, but authorities have all but ruled out finding any survivors.

Cockpit recorder still missing
The black boxes, which airlines are required to install, offer investigators their best chance of discovering why such a new jet crashed. The devices record information about the speed, altitude and direction of the plane as well as flight crew conversations.

“The good news is we have found one of the black boxes,” search and rescue agency head Muhammad Syaugi told reporters.

Authorities say a flight data recorder was recovered, but they were still looking for the cockpit voice recorder.

On a Jakarta dockside Thursday, Boeing and US National Transportation Safety Board officials joined the Indonesian team in sifting through twisted metal plane parts and piles of passengers’ torn clothing, shoes, wallets and mobile phones.

The single-aisle Boeing plane, which was on its way from Jakarta to Pangkal Pinang city, is one of the world’s newest and most advanced commercial passenger jets.

Despite the name, black boxes are in fact bright orange with reflective stripes. They are built to survive at vast depths and in extreme heat and are fitted with a beacon which can emit a signal for one month.

Black boxes help explain nearly 90 percent of all crashes, according to aviation experts.

“Data from the plane — the engine, all the instruments — are recorded there,” Sudibyo said. “If there is an anomaly, some technical problem, it is recorded there too.”

First funeral
Passengers’ remains are being sent to hospital for DNA comparison to relatives.

The 24-year-old civil servant’s coffin was carried by pallbearers through the streets of her East Java hometown Sidoarjo on Thursday.

Dewi’s mother collapsed and had to be carried into their home, while friends and relatives wiped away tears as the casket was laid in a freshly dug grave sprinkled with flowers. A bowl of fruit and two palm branches lay at one end.

Some relate heart wrenching tales of their final contact with loved ones.

A selfie taken by a newlywed husband, Deryl Fida Febrianto, and sent to his wife some 30 minutes before the jetliner crashed has gone viral online.

Aviation experts are puzzled by the accident but say it’s too early to determine what caused the crash.

Lion’s admission that the jet had an unspecified technical issue on a previous flight — as well its abrupt fatal dive — have raised questions about whether it had faults specific to the newly released model, including a speed-and-altitude system malfunction.

The accident has also resurrected concerns about Indonesia’s poor air safety record which until recently saw the country’s carriers facing years-long bans from entering European Union and US airspace.

Lion Air has been plagued by safety concerns and customer complaints over unreliable scheduling and poor service.

The budget carrier has been involved in a number of incidents including a fatal 2004 crash and a collision between two Lion Air planes at Jakarta’s Soekarno-Hatta airport.

In 2014, an AirAsia crash in the Java Sea during stormy weather killed 162 people.