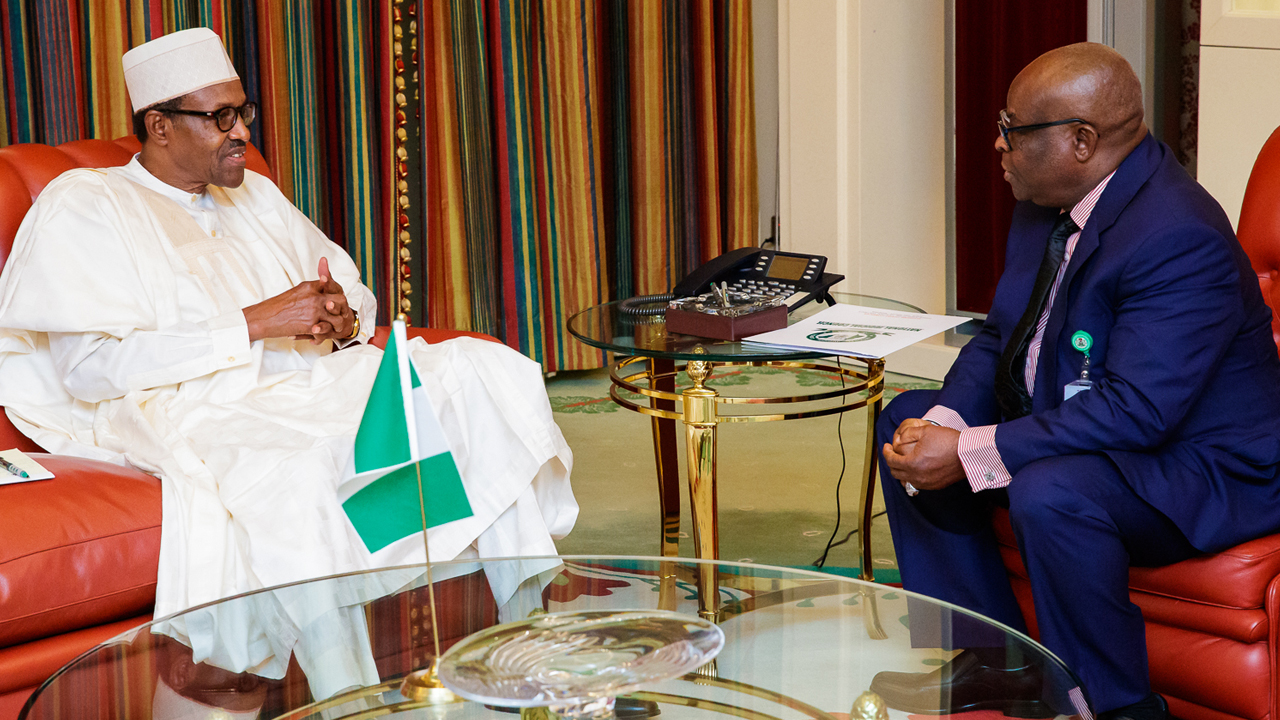 [FILES] President Muhammadu Buhari in audience with Chief Justice of Nigeria Walter Onnoghen at the State House on Tiuesday, April 24, 2018.

December 31st, 2018 marked 35 years since General Buhari overthrew a democratically elected government and shot his way to power via a military coup.

In 2019 in further confirmation of his trenchant unrepentant ways, he has again moved against an arm of government in a continuing pattern of divide and conquer internal warfare.

The news that Nigeria’s Chief Justice, Justice Walter Onnoghen is to be arraigned in court is an unprecedented action in Nigeria’s history, but it is not one done out of any sincere war on corruption.

As the petition, which led to it clearly admits, this was a peremptory strike in view of the upcoming elections in four weeks, which but for rigging and wielding of state machinery, Gen. Buhari is favoured to lose.

But Justice Onnoghen’s career woes did not begin with this precipitate action to oust him from office.

Back in January 2017, a near constitutional crisis was narrowly averted when Buhari refused to forward his name for Senate’s confirmation as Chief Justice of Nigeria, despite being the highest-ranking judge.

At the time, it was self-evident that Buhari who is incurably nepotistic didn’t want to appoint the first southern CJN in more than three decades, even though both the executive and both houses of legislature were headed by northerners.

The proof of Buhari’s bias against Onnoghen principally for his southern origins came ironically from the President this week himself.

In an interview, Buhari said, “Don’t talk even of the US Ambassador (Justice Nsofor.) That one he wrote a minority judgment on my behalf so I paid him back (laughs).”

In an op ed I wrote in January 2017, I noted thus, “While many are aware of his (Buhari’s) government’s unprecedented assault on senior judges some of whom reportedly haven’t ruled his way…he has also shown favour via ambassadorial nominations to justices who ruled in his favor during his unsuccessful election petitions.

Ironically Justice Onnoghen is one of those dissenting judges who ruled in favour of General Buhari in his last election petition.

Since the inauguration of President Buhari, Justice Onnoghen similarly ruled that the trial of the Senate President Saraki at the tribunal could continue – a position championed by Buhari in his bid to unseat the head of the second arm of government.

The question therefore is, if Buhari could nominate other judges who ruled in his favour for positions they never dreamt off, what is so wrong that he cannot forward Justice Onnoghen’s name for a position he is entitled to?”

The truth is that now that Buhari has confessed that his appointment of a judge as ambassador was payback for judgment given in his favour, as morally unsettling as that may be, it also establishes that his hostility towards Onnoghen’s appointment as CJN when Onnoghen was similarly entitled to payback for ruling in Buhari’s favour is for nefarious reasons.

Due to public pressure, then acting President Yemi Osinbajo (himself a notable lawyer) caved in and swore him in as CJN.

In much the same way that Buhari returned from a United Kingdom sickbed and fired the most senior southerner Osinbajo appointed to head the DSS, an effort is now underway to undo the constitutional appointment of Justice Onnoghen through this concocted trial.

It is important to note that Buhari is an old dog, who can’t learn new tricks. During his military dictatorship Buhari promoted judges who agreed to preside over his kangaroo tribunals, which the bar boycotted.

He went so far as to promote Justice Udogu for convicting activist and musician, Fela Kuti. Three and a half decades later, he continues to manipulate the judiciary even worse with the arrest and trial of serving judges.

Ogebe, ESQ an expert on the Nigerian judiciary writes from USA