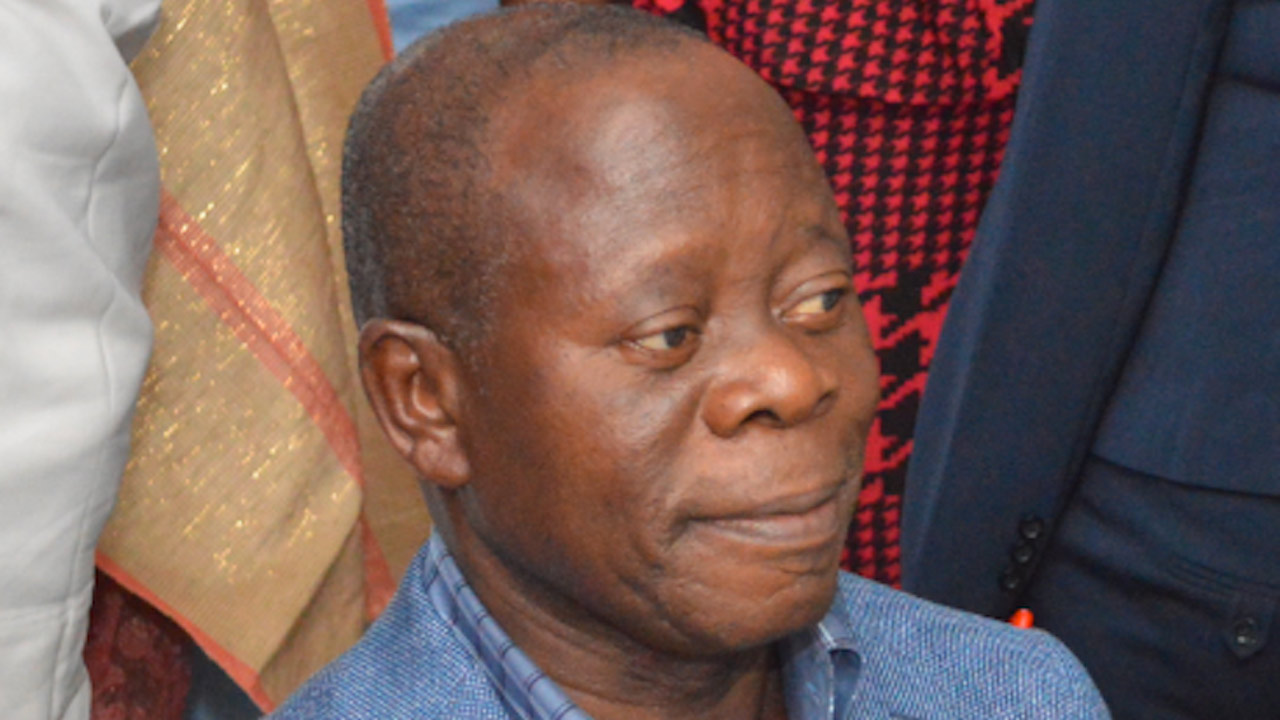 • It’s Not Business Of DSS To Manage Parties
The National Chairman of the All Progressives Congress (APC), Adams Oshiomhole, who quietly slipped out of the country last week, yesterday, returned from the United Kingdom.

At a meeting with editors in Lagos, the former Edo State governor made concerted efforts to debunk claims that he was arrested, detained and granted administrative bail by the Department of State Services (DSS), after a nine-hour marathon interrogation.

Oshiomhole’s return was after he visited his wife, Iara, in the United States, and subsequently having audience with the national leader of the All Progressives Congress (APC), Bola Ahmed Tinubu, in the United Kingdom.

The APC chairman’s sudden departure was after his reported interrogation by the DSS over allegations of collecting bribes during his party’s primary elections.

But while clearing the air at yesterday’s session with editors, Oshiomhole said he, “saw DSS only once and it was a conversation, not an arrest or detention. The conversation centred around APC primaries. The question now is whether or not it is the DSS’ job to interfere in a political party’s issue. And if there’s an allegation of corruption, it is the responsibility of EFCC and ICPC.”

Contrary to reports that the former Edo State governor was asked by the DSS to return the next day, he said he was never asked to return

The party chair said that he was billed to travel abroad last Monday, but postponed the trip in order to honour a meeting with President Muhammadu Buhari, adding that he eventually left the country on Tuesday.

On allegations that he was released on administrative bail, and that Governor Yahaya Bello of Kogi, came to pick him home from the DSS office after interrogation, the APC chairman said nothing could be farther from the truth.

Said he: “I was the one who called Yahaya Bello and he came, but I drove home in my own car.”

The Peoples Democratic Party (PDP’s) call on Interpol to arrest Oshiomhole, and for insinuating that he had fled the country over the alleged messy APC primaries did not escape his attention.

To that he said: “What would they (PDP) have said if it was the PDP chairman that was invited by DSS, for instance, over the dollar bazaar at their Port Harcourt primary?

“They would have said democracy is under threat and would have fired a letter to the UN as they often ridicule themselves.”

The former labour leader also attacked some of his party members saying, “a few important members of APC may be conniving with PDP because they preferred the impunity of the PDP era.”

Imo State Governor Rochas Okorocha, and his Ogun State counterpart, Ibikunle Amosun of Ogun are two of those that are very sore over the APC primaries. Both still blame Oshiomhole for their inability to get the gubernatorial tickets of the party for their preferred candidates.

Amosun, while answering questions on the whereabouts of the APC national chairman said he didn’t have a hand in his travails, and had no idea of his whereabouts.