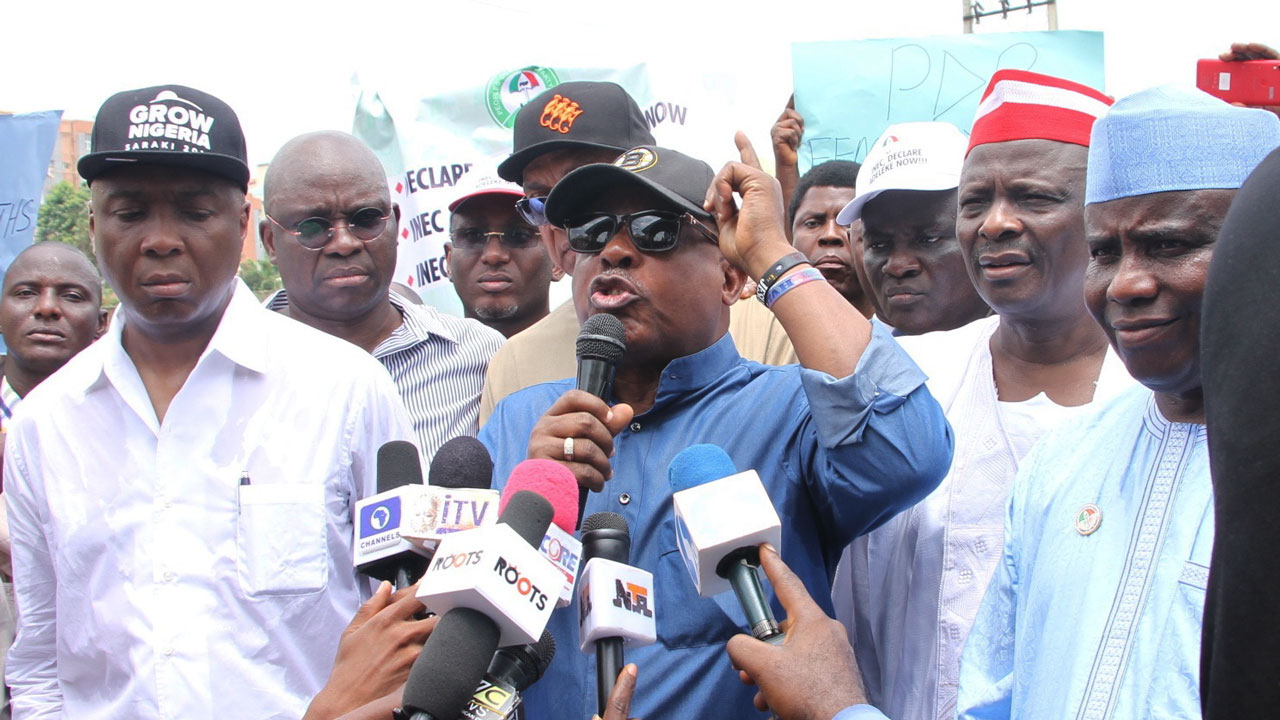 • Aregbesola Knocks Protesters, As Ganduje Presents Governor-Elect To Buhari
The Nigerian Police, yesterday, threw tear gas at top leaders of the Peoples Democratic Party (PDP), who staged a peaceful protest against the alleged roles of the Independent National Electoral Commission (INEC) and the Police in the Osun State governorship election last month.The protest took place almost at the time President Muhammadu Buhari was receiving Osun State Governor Rauf Aregbesola and Chairman of the All Progressives Congress (APC) Governorship Election Campaign in the state, and Governor of Kano State, Umar Ganduje, who were at the Presidential Villa to present the party’s candidate in the election and governor-elect, Alhaji Gboyega Oyetola, to the President and also thank him for his support in the election.

Led by the National Chairman of PDP, Uche Secondus, the protesters, including presidential aspirants, embarked on a peaceful, but dramatic protest to the headquarters of the INEC and Police, demanding the immediate declaration of the party’s candidate, Nurudeen Ademola Adeleke, as winner of the election.They had successfully concluded the protest to the INEC headquarters and began to march towards the Police headquarters when trouble started.

Specifically, the protesters got to the front gate of the Police headquarters and were about moving in when suddenly, the atmosphere became laden with a thick smoke and gunshots fired by the policemen.As many scampered to safety, Secondus and party leaders mobilised members to the Area 11 Junction, about one kilometre away, to address the crowd of protesters.Personalities who partook in the protest include Senate President Abubakar Bukola Saraki; Governors Aminu Tambuwal (Sokoto); Ibrahim Dankwambo (Gombe) and Ayodele Fayose (Ekiti), as well as former Jigawa State governor Sule Lamido and Senator Dino Melaye.

Earlier at the INEC headquarters, Secondus had said: “The country is sleeping on a keg of gun-powder, you know it. If you feel that Nigerians are not aware of the activities of INEC and the Police, you are deceiving yourselves. You are pushing Nigerians to the wall and when you push them to the wall, there would be resistance. We hope we will not get there, but this will serve as a notice.

“Therefore, we demand that INEC Chairman should resign. Amina Zakariyau should resign. She is the manipulator of all elections. Let me address Mr. President Muhammad Buhari, you cannot continue to give instructions to security agents to carry out your agenda, instead of protecting Nigerians. “The hunger in the land is too much; the corruption in the country is too much. You are not fighting corruption; you are fighting your perceived enemies and you are fighting the masses. Nigerians have left you. You cannot change the will of the people by force.

“Take note and stop directing the security agencies and INEC to rig elections. You must come out clean. What we expect from you is to conduct a free and fair elections. Responding, however, INEC’s National Commissioner on Legal Matters, May Agbamuche-Mbu, said: “I want to thank you and inform you all that Professor Mahmud Yakubu would have received you all. The commission takes this demonstration very seriously. We are happy that the protest is peaceful and carried out in a civilised manner.

“INEC is up to this job, we are all here in INEC as professionals and not politicians. We are going to do our best come 2019. I must say we are a team and decisions are made by the commission and not by any individual.

“All your comments have been noted and it will be passed to the chairman and the entire commission.”Meanwhile, while briefing State House Correspondents after he and Ganduje met with Buhari at the Presidential Villa behind closed-doors, Aregbesola described those protesting the result of the election “as mentally unstable.”