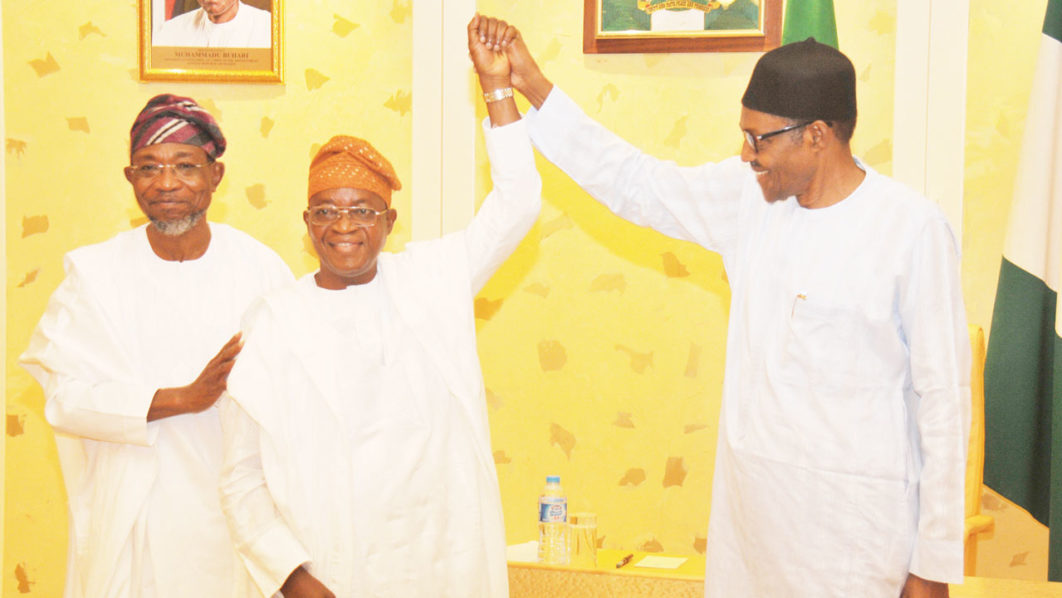 President Muhammadu Buhari (right) raising the hand of All Progressives Congress (APC) governorship candidate in the September 22 election, Isiaka Gboyega Oyetola. With them is Governor Rauf Aregbesola, during Oyetola’s introduction to the President at the Presidential Villa, Abuja on Thursday

The immediate former Osun State Governor Rauf Aregbesola Thursday has said the judgement of the Osun Election Petition Tribunal is “strange to law and common sense”.

“We regret to note that the decisions in the majority judgement, as can be seen from our subsequent observations, is strange to law and common sense,” Aregbesola said in an advertorial published on Thursday.

“It certainly does not support the cause of electoral justice and may constitute the death knell for properly conducted elections,” he added.

A three-member panel of an election petition tribunal in its ruling in Abuja last Friday said that the rerun election that held on September 27, 2018, was illegal.

The tribunal said the People’s Democratic Party candidate Ademola Adeleke won the election at the first ballot on September 22 and that the rerun that Independent National Electoral Commission devised to reach a final conclusion a week later was illegal.

Subsequently, the tribunal deducted the votes scored by the All Progressives Congress candidate Gboyega Oyetola at the rerun and declared Adeleke winner of the poll.

In the first ballot, the PDP candidate won majority votes of 254,698 votes while Oyetola of the APC came polled 254,345 votes.

Adeleke’s margin of lead, 354 votes, was lower than the cancelled votes which were 3,498. Hence the re-run in seven polling units.

Aregbesola insisted that the cancellation of the result of the rerun election lacked any legal basis.

“There was no evidence of any act known to render election null and void in an election petition such as over voting, non-accreditation, ballot box stuffing etc.,” he said.

Aregbesola maintained that the election was cancelled “merely on the basis that some columns of result forms were not filled.”

“It must be noted that APC and its candidate were not accused of any electoral malfeasance in the 17 polling units,” he added.

“It is in view of the foregoing that we are going to vigorously pursue an appeal against the judgement. We have the firm confidence that it will be upturned,” the former governor declared.

Oyetola will, however, continue in office until all appeals are exhausted, including up to the Supreme court.