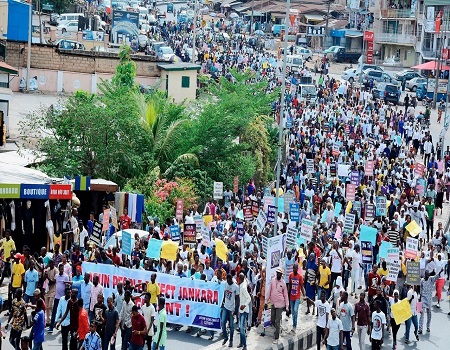 Scores of supporters of Governor Gboyega Oyetola gathered in Osogbo on Wednesday to stage a peaceful protest against the judgment delivered by the Election Petition Tribunal sitting in Abuja last week Friday.
The election tribunal had declared the candidate of the Peoples Democratic Party (PDP), Senator Ademola Adeleke as the winner of the September 22 governorship poll in Osun State.
But, the protesters majority of who were youths stormed Osogbo, the capital of Osun state in their numbers and caused serious gridlock within major roads, describing the judgment as totally against the wish of the people.
Armed with placards with various inscriptions such as ” Oyetola remained our Governor”, We voted for Governor Oyetola “, We cannot be intimidated”, among others, the demonstrators vowed not to rest until true justice is done in the final determination of the matter at the appellate court.
Speaking with journalists, the leader of the protest, who is the General Secretary, Osun Concerned Citizens, Mr Yaya Ademola said the protest became expedient  following what they observed as lacuna in the ruling of the election tribunal which declared Senator Ademola Adeleke of PDP the authentic winner of the September 22, 2018, gubernatorial election.

He stated “the said verdict, which is a split decision by which a majority of two of the three-member panel purportedly declared Mr Ademola Adeleke of the Peoples Democratic Party (PDP)as winner of the September, 22 and 29, 2018 governorship election is clearly unacceptable to us and the overwhelming majority of the people of Osun in general and the electorate in particular.
“Our concern in this matter is not just a partisan disavowal of a judgment that is unfavourable to our preferred candidate, Mr Isiaka Gbeyega Oyetola of the All Progressive Party. Our rejection of the said verdict is borne out of the clear fact that it is a thinly disguised attempt at clothing the product of a black-market judicial heist with the garb of legality in the hope that it may acquire legitimacy.”
“Notwithstanding the fact that a proper legal response to this unjust verdict has been entered at the Court of Appeal, we hasten to say that the basis with which the majority judgement was made is strange and baseless”, Ademola remarked.