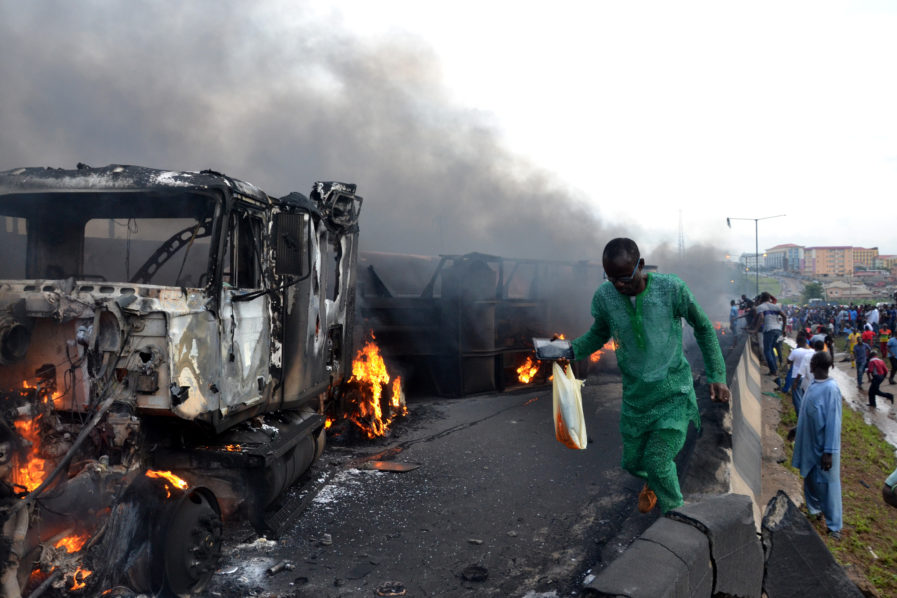 Passersby walk amid burned cars after an oil tanker exploded on a highway on June 28, 2018 in Lagos killing nine people in a huge blaze. / AFP PHOTO / STRINGER

Lagos State Government has said it will prosecute the owner and driver of the fuel tanker exploded last Thursday on Otedola Bridge inward Ojodu Berger along Lagos-Ibadan Expressway.

It was the reason the State’s Attorney General and Commissioner for Justice, Mr. Adeniji Kazeem at the weekend wrote to the Commissioner of Police (CP), Imohimi Edgal to advise him on the relevant provisions of the law that could guide the ongoing investigation which would lead to possible prosecution.

Confirming receipt of the letter while briefing Government House Correspondents after the Security Council Meeting chaired by Governor Akinwunmi Ambode, Edgal said investigations into the incident were ongoing, saying that government would not allow vehicles that pose serious danger to residents on the road.

The police chief, who briefed journalists alongside heads of other security agencies in the State, specifically commiserated with those who lost their loved ones to the tragic incident, while also commending emergency responders who quickly raced to the scene to keep the causality figure low.

“As regards investigation into the matter, it is in top gear. I have just received a letter from the office of the Attorney General and Commissioner for Justice which stated very clearly charges which we are going to prefer against the driver and the owner of that tanker.

“Henceforth, we are using this opportunity to call on all tanker drivers, all lorry drivers, all owners of such articulated vehicles to please submit those vehicles for Vehicle Inspection Office (VIO) test; they must go through the entire hub and get the Ministry of Transportation (MOT) Certificate of Road Worthiness. We will not allow such vehicles which obviously pose serious danger to other road users on our roads,” Edgal said.

He said government had already directed security agencies to intensify enforcement of relevant laws, especially the State Traffic Law, with the view to ensuring that the roads and highways in the State were safe for commuters to ply without any danger.

Edgal also urged residents to always refrain from converging on the scene of any accident of such magnitude as that of the unfortunate tanker fire incident, saying there could be secondary explosion which could lead to loss of lives.

Speaking on other issues deliberated at the meeting, Edgal said the Council reviewed the security situation in the State since the last time it met, saying it was gratifying to note that there had been 17 per cent reduction in violent crimes in the period under review.

He also allayed fears over renewed threat of militancy in the creek areas of Epe, Imota and Agbowa, assuring that State Government, in collaboration with security agencies, was on top of the situation.

“We have just concluded the Security Meeting Chaired by His Excellency, the Executive Governor of Lagos State, Mr Akinwunmi Ambode and a wide range of security issues were discussed but most importantly some of the threats which we are currently having in certain parts of the State.

“The first one relates to the renewed threat of militancy around the creeks of Epe, Agbowa, Imota and the action that we are taking. There is a good synergy between the security agencies and the locals in ensuring that we keep some of these militants who want to come into the State from Ondo waters to try to disturb peace of the State.

“We are calling on all those who are in the riverine communities to continue to partner with security agents to ensure that when they see strange movement, they quickly alert security agencies so that we can keep them safe. For now, I can assure Lagosians that those areas are being properly policed and security is tight in those areas,” Edgal said.

Besides, Edgal appreciated Lagosians for credible information which had aided the fight against kidnapping, cultism, drug sale and drug abuse in the State, revealing that operatives of the Command recently intercepted a Container with over 37 Cartons of Tramadol which would have gotten to the public if not for prompt action of security agencies, just as he urged residents to continue to support security agents.

On the scheduled visit to Lagos by French and Namibian Presidents in the coming days, Edgal urged residents to show the hospitality the State is known for, while appealing for cooperation in the eventuality of road diversions and restrictions.