By Ikechukwu Nnochiri, Henry Ojelu & Dirisu Yakubu
ABUJA—STRONG reactions,yesterday, trailed the military’s arrest of Northern Regional Editor of Daily Trust Newspaper,  Uthman Abubakar and a reporter, Ibrahim Sawab, and the closure of the Abuja and Maiduguri offices of the organisation.

Armed military invaded  the  regional office of the newspaper in Maiduguri, Borno State and arrested the journalists. They also reportedly requested to see the Political Editor, Hamza Idris, whose name has appeared in bylines of major exclusive and investigative reports. 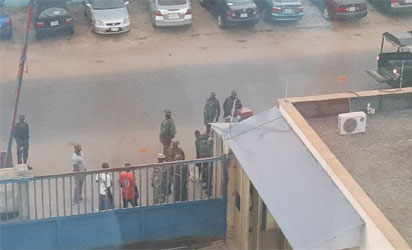 Soldiers in front of Daily Trust’s office in Maiduguri, shutting the office.

Though it is not clear why the military took the action, PRNigeria observed that the Daily Trust on Sunday published a strong editorial and news reports on security challenges in Northern Nigeria.

Some of the lead stories include: “Military Prepares Massive Operation to Retake Baga, Others,” “Zamfara Bandits May Have Link with Boko Haram -Defence Minister,” “Shettima Funds 20,000 Civilian JTF for six Years,” and “Troops Repel Boko Haram Attack in Damasak… Kill Many in Yobe.”

The Editorial, titled: “FG is Running Out of Excuses,” highlights some of the humanitarian challenges in the North-East and the efforts of the military in tackling the Boko Haram insurgency.

The Editorial pointed out that the Borno community leaders at an emergency meeting of security agencies summoned by Governor Kashim Shettima expressed fears that insurgents could push on from Baga, overrun Monguno and move on to Maiduguri.

The Editorial further acknowledged the successes of the military in repelling three attacks on Monguno with Air Force raids that halted the insurgents in their tracks and killed many terrorists. It also commended the effort of the military in launching a major offensive to retake the lost towns and bases.

The Editorial nevertheless asked some hard questions and proffered suggestions. It stated thus: “From all indications there is no multinational force in the Lake Chad region, and we must ask why it is that Chadians, Nigeriens and Cameroonians do not seem to be around anymore?

“We, however, commend the Niger Republic forces that last week killed 200 Boko Haram terrorists in their south eastern Diffa Region. Despite fortunes reportedly spent on armaments, it is clear also that our military lacks enough force and firepower to eliminate Boko Haram once and for all.

“This is very unfortunate. The country is at war and has been so for nearly 10 years now. Even though many successes were recorded, we expect the Federal Government to drop everything else and go for the best weapons, equipment and munitions wherever it can find them,’’ the editorial read in part.

At press time, the newspaper said the whereabouts of its arrested staff remained unknown after armed Nigerian security agents stormed the office and shut it down.

Editor-in-Chief of Daily Trust, Mr Dan Ali confirmed the development but added that Government officials were trying to resolve the matter.”

Mr Dan Ali also said “the military are not happy with our reporting of the Baga attacks by Boko Haram and are just using today’s story as an excuse to clamp down on the newspaper”.

He said: ‘’Immediate we got the report about what happened in Maiduguri, we quickly sent a delegation to the military barrack in Maiduguri to find out what really happened. Our delegation could not get across to those in-charge there. We also tried to get the Chief of Army Staff and the officer in-charge of Public Affairs but we are yet to get any response from them on why they have taken such action. But whatever the case may be, we want to urgently call on the military to release the journalists that were arrested. Journalists are not enemies of democracy rather they are the conscience of the society. Clamping down on journalists is unacceptable and we call the military authority to release them.’’

In a statement by its Director, Mr. Lanre Arogundade, the IPC said: ‘’We  condemn in strong terms, the forceful closure of Daily Trust Newspapers’ head office in Abuja and the organisation’s Maiduguri office by military personnel.

‘’A senior editorial staff of the organisation confirmed the military onslaught on the media establishment stating that staff had been ordered out of the premises, laptops and computers seized and operations halted. No reason, he said, was given for the action.

IPC considers this development as a fresh threat to freedom of the press as well as the freedom and individual liberties of journalists and other media professionals working in Daily Trust.

The action of the military is also a threat to democracy with the presidential elections, less than two months away. The military is bound by the laws of the land and cannot in any circumstance be allowed to resort to extra judicial measures no matter its grievances.’’

The main opposition Peoples Democratic Party, PDP, while condemning the invasion of Daily Trust Newspapers’ offices in Maiduguri and Abuja, said it is a sign of the nation’s gradual descent into tyranny under the watch of President Muhammadu Buhari.

The party while bemoaning the development called on the international community, democracy advocates and well-meaning Nigerians to save the media, adding that the invasion of the national daily’s premises is an attempt to gag the Fourth Estate in a bid to prevent the dissemination of credible information to Nigerians and the outside world.

In a chat with Vanguard, Diran Odeyemi, Deputy National Publicity Secretary of the PDP enjoined President Buhari not to forget that press freedom is an essential component of constitutional democracy.

His words: “President Buhari is gradually taking us back to the era of military dictatorship and what happened to Daily Trust Newspaper is a pointer that he is bent on taking us backward. This is very unfortunate.

“Apart from harassing opposition figures, they have shifted focus to the media but we must resist this because the media as the watchdog of the society must be allowed to play its constitutional role. We call on the international community, civil society organizations as well as well-meaning Nigerians to rise up and say no to the culture of intolerance now pervading our land.”

We have no information on the matter – APC

Contacted on the invasion of Daily Trust offices by armed soldiers as well as allegation by the PDP that the Buhari administration is muzzling the voices of dissent, APC National Publicity Secretary, Mallam Lanre Issa-Onilu, said: “I don’t have any information on this thing you are telling me. I am just hearing it.”

Some lawyers and activists in the country also condemned the action, describing it as an attempt to intimidate the press ahead of the 2019 general elections.

Similarly, an activist, Mr. Kelechukwu Mbani, said he was perturbed that such action came barely two months to the general elections.

“This is a sad tale for our our democracy. This is taking us back to 1984 when there was similar attempt to clampdown on the media. This is absolutely unacceptable under this democratic dispensation. We have also seen opposition voices and Civil Society Organization being muzzled down. This is a dangerous trend that does not portray Nigeria in good light.”

Following the reported shutdown of Daily Trust Newspaper’s offices in Maiduguri and Abuja by military personnel over suspected reportage of military operations against Boko Haram, the Defence headquarters, yesterday, was taciturn.

Attempts to get the Defence headquarters to speak on the issue yielded no answer.

An SMS to the Acting Director of Defence Information, Brigadier General John Agim, requesting to know the reasons for the action had not been replied at the time of sending this report.

Reacting, yesterday, Senior Special Assistant to the President on Media and Publicity, Garba Shehu twitted on Daily Trust’s invasion by the Army: ‘The Federal Government has directed the military to vacate the premises of @daily_trust and the order has been complied with. Issues between the military and the newspaper as they affect the coverage of the war in the Northeast will be resolved through dialogue.