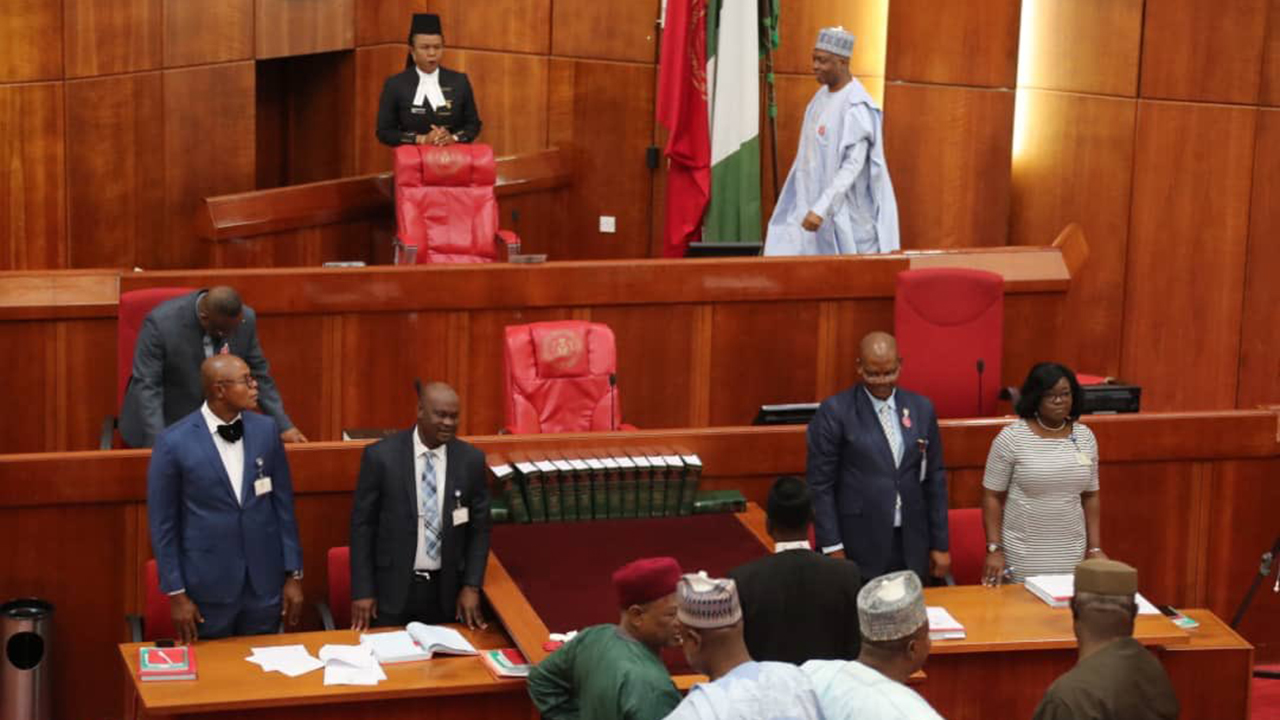 Bukola Saraki at the Senate

• Lawmakers put figure at $60 billion
• Say 2019 budget unrealistic
• Reps move to check inconclusive polls
The massive increase in the nation’s debt profile troubled senators yesterday as they cautioned the executive arm of government against returning the country to the category of highly indebted countries.The concerns over the issue came up during the Senate’s debate on the general principles of the N8.83 trillion 2019 budget.

First to raise the alarm was the Deputy Senate President, Ike Ekweremadu (PDP Enugu West) who made contributions after the Senate Leader, Ahmed Lawan (APC Yobe North) had given the lead debate on the budget estimates for passage for second reading. Ekweremadu said that though the budget proposal should be given expeditious consideration in view of the enormous time already lost on the bill, the borrowing plans as contained in the proposal must be scrutinised to prevent the country from exceeding its limit when juxtaposed with the ratio of Gross Domestic Product (GDP).

“Yes, money must be sought by any government to fund infrastructure, but it must not be solely anchored on borrowing which, in the long run, will take the country back to a problem it had earlier solved. Besides, there are other creative ways of funding such highly needed infrastructure, “he said.

Ekweremadu cautioned that “borrowing is becoming increasingly unsustainable and we must be able to caution ourselves before we mortgage the future of our children. Some countries, including Indonesia, are already in danger because of the borrowing they had in the past. For every money you borrow, there must be a day for payment.”

According to the deputy Senate president, depending on borrowing means that the nation is putting its future in jeopardy. “Therefore, it is time for us to ensure that our debt to GDP ratio must not exceed an acceptable level.”Ekweremadu also condemned the failure to correct and restore the budget life cycle. “Increasingly, we have deviated from the financial year proposed by the constitution, which says in Section 318 that it should be a period of 12 months from 1st January of every year.
It means it is usually between the 1st of January and 31st of December or any other time as may be prescribed by the National Assembly,” he said.

The senator, who lamented that in the last four years, the average period the budget had been passed had been in May, blamed the executive arm for the situation.He said: “The executive consistently has brought the budget quite late, usually towards the end of December or shortly before we leave on break in December and that makes it impossible for the National Assembly to consider this until sometime into January. This year, it is even going worse because we had to go into election. The implication is that the budget will be delayed, and the implementation will start late. When you pass a budget in May, for instance, you are passing it just at the verge of the raining season. Nigeria is a developing country that needs a lot of infrastructural development, which can only take place during the dry season.”

Rolling out statistics, Dino Melaye (PDP Kogi West), said the debt profile of the country stood at $60 billion from the less than $20billion it was before the existing government came on board in 2015.He gave the breakdown as $23billion external debt, $20billion local debt and another $12 billion already being proposed to finance Port Harcourt-Maiduguri Rail lines

“Nigeria is gradually turning to a chartered borrowing nation under this government all in the name of funding infrastructure. This must be stopped because the future of the country, and in particular, lives of generations yet unborn are being put in danger.”He added that even with the high level of indebtedness, the government in power was planning to further devalue the Naira to about N500 to a U.S. dollar. Melaye said the nation’s stock market suffered a N300billion loss two weeks ago when President Muhammadu Buhari got reelected.

“Inflation is on the rise, unemployment rate is increasing, assumptions made for the budget estimates as regards $60 oil price benchmark and 2.3million barrel oil production level per day are unrealisable and unrealistic,” Melaye added. Shehu Sani (PRP, Kaduna Central), Albert Akpan Bassey (PDP Akwa Ibom North East ) also called for caution on the part of the executive on the rising debt profile.

But Gbenga Ashafa (APC Lagos East), Adamu Aliero (APC Kebbi Central), Jibrin Barau (APC Kano North) and Deputy Senate Leader, Bala Ibn Na’Allah ( APC Kebbi South) said the debt profile was not as outrageous as being portrayed.Na’Allah said rather than over- borrowing, the country was grossly under-borrowing when the total amount borrowed was juxtaposed with her population and both human and capital resources.

Though Mohammed Ali Ndume (APC Borno South), moved a motion for the budget to pass for second reading yesterday in view of enormous time already lost to its consideration, the Senate President, Bukola Saraki, ruled that the debate should continue and end next week Tuesday.

The Senate also resolved to subject all allegations of irregularities and breaches of the law experienced during the presidential and governorship elections to a serious debate to allow it find out the causes and come up with solutions, including the possible signing of the last Electoral Amendment Bill by President Muhammadu Buhari. Adopting a motion on the issue sponsored by Melaye, the Senate said it would be careful during the debate about matters pending in court.

In his motion, Melaye said the Senate must rise against all forms of irregularities and abuses of the law in the elections. He told his colleagues that the issue was not political, but one which would help curb electoral malpractices in future elections.
Also, piqued by the rampant declaration of elections as inconclusive, the House of Representatives is exploring how to curtail the development which it noted is fast making a mockery of the country’s electoral system.

The House yesterday at the plenary presided over by Speaker Yakubu Dogara resolved to set up an ad hoc committee aimed at amending the Electoral Act (2014) to address the problem.The decision was preempted by a motion sponsored by Sunday Karimi who cautioned the Independent National Electoral Commission (INEC) against subverting the will of the people by resorting to the provisions of its guidelines (relating to inconclusive elections), but to adhere to the provisions of the constitution and allow aggrieved parties to proceed to the relevant election tribunals to promote the credibility of the electoral process.

Karimi (Kogi: PDP) had remarked that since the November 21st 2015 gubernatorial election in Kogi State, the declaration of elections as inconclusive had become a demon haunting the nation’s electoral system, thereby eroding the confidence of the electorate.

Insisting that INEC should not be allowed to continue to whimsically declare elections inconclusive, he asserted that the combined effect of Section 134, 179, 111 of the 1999 Constitution (as amended) and 26(1) as well as Section 53(2)&(3) of the Electoral Act show that inconclusive elections were not envisaged in the country’s law, except where there was over-voting in a polling unit, not where votes already cast were cancelled.

Ali Madaki (Kano:PDP) who spoke in his support said the circumstances that led to the declaration of the Kano governorship poll as inconclusive was a clear indication that INEC had become a tool in the hands of powerful forces within the APC to subvert the will of the people.

“What we went through in the last one month was war. What happened in the last one month is akin to a military coup. The constitution of Nigeria is very clear about what you need to do to declare a winner in an election, but for one reason or the other, in most cases, INEC has shown not to be independent because in states where PDP is winning, the elections have been declared inconclusive.

“We know for a fact that all the ballot papers used in Kano are still there intact with INEC even the original of the result sheets that were torn; the results that were torn were the duplicates. We submitted them and they said they had passed through hands so they could not use them again. We then told them that the professor who collected the results is here, let him look at them, are they his documents or have they been tampered with? They said no. They went and declared our election inconclusive.

“We are talking about the integrity of President Muhammdu Buhari – his integrity, if he has any, is being questioned seriously. If he is watching, he has been declared as the winner while the margin of victory is less than the number of cancelled votes all over Nigeria, but he has been declared winner and the elections of our candidates in PDP in six states of northern Nigerian have been declared as inconclusive. From information available to me, in the next two weeks when we are going for the elections, they will use all resources available and declare APC as winners in these elections. Let me sound a note of warning that we will not take it.”

The House Leader, Mr. Femi Gbajabiamila, who aligned himself with the need to amend the Electoral Act cautioned against the usurpation of the powers conferred on the judicial arm to interpret the laws of the country.He argued that until the Electoral Act is amended, INEC, which is empowered to conduct and regulate elections, is empowered to declare an election inconclusive based on the pronouncement of the Supreme Court after it adjudicated on the disputed Kogi governorship poll in 2016.