You are here
Home > Africa > Outside help not wanted, says DR Congo as key elections loom 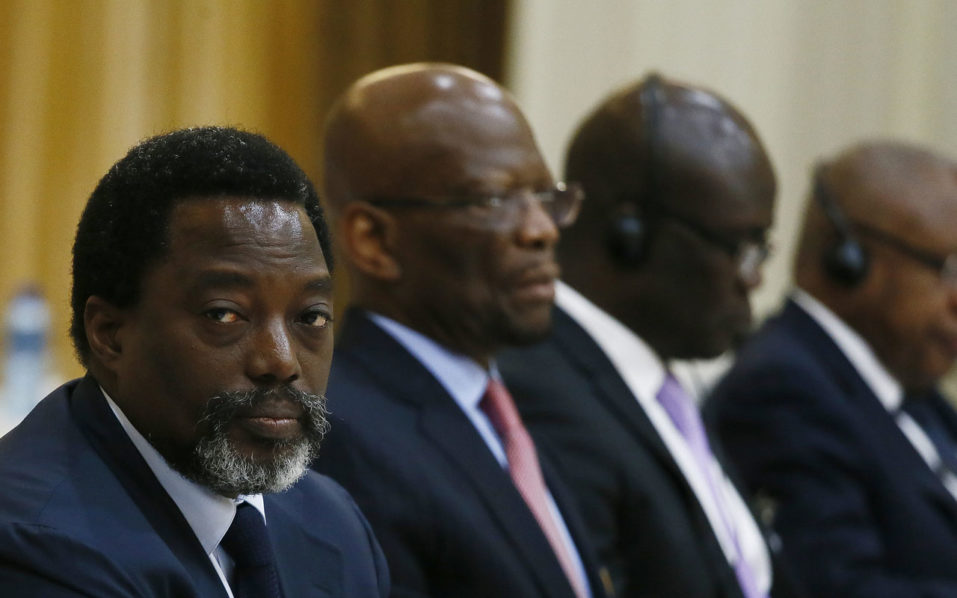 (FILES) This file photo taken on June 25, 2017 shows President of the Democratic Republic of Congo Joseph Kabila (L) looking on during a meeting with South African President Jacob Zuma at Sefako Makgatho Presidential Guest House in Pretoria. The election to pick DR Congo’s next president will not happen before early 2019, the electoral commission said on October 11, a delay that raises fresh security worries in the vast African nation. / AFP PHOTO / Phill Magakoe

Mountainous hurdles face the Democratic Republic of Congo as it prepares for elections, just four months away, that will shape the future of one of the world’s powder-keg countries.

Organising elections among some 40 million voters in a troubled, impoverished state nearly five times the size of France is a huge challenge.

But, prickly about intrusion, the DRC is rejecting offers of advice, oversight and election funding from abroad.

On Monday, it was regional neighbour South Africa’s turn to be spurned.

The authorities rejected the appointment of South African former president Thabo Mbeki as “special envoy” to the December 23 ballot, a role announced in the press but not officially confirmed by Pretoria.

“I can tell you that there will be no special envoys to the DRC, even if they are Thabo Mbeki” — the host of peace negotiations that ended the Second Congo War in 2003 — President Joseph Kabila’s diplomatic advisor, Barnabe Kikaya Bin Karubi, told AFP.

Observers “tend to behave like proconsuls. They don’t respect the DRC’s autonomy. We want to mark our sovereignty,” added Communications Minister Lambert Mende.

Frosty to UN
The DRC’s electoral commission has also said it is refusing help offered by the UN mission, MONUSCO, which proposed using its helicopters and planes to ferry imported voting machines to polling stations nationwide.

“We won’t impose ourselves,” a MONUSCO spokesman said — a marked contrast to the situation in 2006, when Kabila was elected by the people after coming to power. The UN played an important role that year in lending logistical assistance.

Kinshasa wants to see MONUSCO gone by 2020, ending a 20-year presence including more than 16,000 pairs of boots on the ground at an annual cost of more than a billion dollars.

On August 8, Kabila, 46, eased months of tension when he signalled he would not stand again for the office he has held since 2001.

He threw his support behind a close ally as the candidate of his political majority — former interior minister Emmanuel Ramazani Shadary, who is permanent secretary of Kabila’s People’s Party for Reconstruction and Democracy (PPRD).

The DRC opposition, which shed blood in protests against Kabila’s grip on power after his mandate ended in 2016, remains deeply suspicious.

It has raised concerns about nuts-and-bolts issues such as the electoral roll and the voting method, and fears Kabila is simply plotting to remain the power behind the throne.

“Our people cannot and will not accept a sham election where Joseph Kabila, while not himself being a candidate, remains absolute master of the electoral process,” the pro-democracy movement Lucha (Struggle for Change) said on Monday.

‘Cheating machines’
One of the trigger points is the novel use of touch-screen voting machines which the DRC election commission says are crucial, given the problem of printing, distributing and tallying ballot sheets in a sprawling country with communications problems.

Lucha, though, has branded the South Korean-made devices “cheating machines.” It is urging the public to march on the commission’s headquarters on September 3.

The European Union, like the UN and US, is closely following the election buildup.

It has frozen assets and denied visas to a dozen Congolese figures — including Shadary — on the grounds of human rights abuses since the constitutional end of Kabila’s second and last mandate in December 2016.

“Obviously we would like to send an observer mission from the European Union,” said a diplomat.

“But to do that, we need an invitation from Kinshasa. In the present climate, I find that hardly likely.”