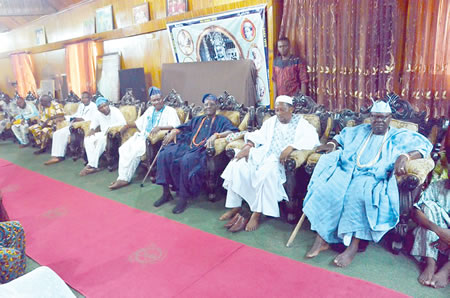 The Alaafin’s palace drummers are used to occasional interlude by the Alaafin of Oyo, Oba Lamidi Adeyemi but that of last Friday practically overstretched the old drummers. Oba Adeyemi fully engaged and played their teacher instructing them some tunes that brought out the best performance in them.

Watching the Alaafin’s steps as he calculatedly carried both legs on the floor of the palace, the guests from Port Novo, Benin Republic led by the Alajase-elect, Oba Aderemi Ajado Sanni could not but applaud the octogenarian whose body movement betrayed his age.

In 2016 while hosting members of the National Association of Physiotherapists of Nigeria who visited him on free medical consultations for Oyo indigenes to mark the World Physiotherapy Day, Oba Adeyemi swept his guest off the carpet doing some dances to their amazement.

Similarly in 2017, he also thrilled Islamic faithful who attended the eid-il-fitri prayers at Agunpopo prayer ground. His wives were all watching him on their way back to the palace.

While the public is always marveled at every occasion where the Alaafin displayed his dance skills, the traditional ruler however, plays it down and says he sees nothing special in what he does regarding his passion for dance.

He explained: “Dance is an important element of Yoruba culture promoted in Oyo. I must have told you the history of drum and the role Oyo played in its evolution. An Alaafin is Alaafin because he is the custodian of Yoruba culture and must be seen to demonstrate it at all time.

“So if I dance well, it is my duty to do so because I was well tutored in the act. Every Yoruba traditional ruler is duty bound to be seen in this colour. When we do this, the non-Yoruba will respect our culture and tradition.”

The guests from Benin Republic were in the palace to pay homage to the Alaafin and also inform him of the coronation ceremony of the new Alajase scheduled for April 6, 2019. During his speech, the Oba-elect expressed the gratitude of his people to the Alaafin’s support and his struggle to ensure the Yoruba in the Franco-phone country get their voice heard in the scheme of things.

According to him, ‘’I am particularly grateful to my father, the Alaafin of Yorubaland, who in spite of his busy, tight schedule, stands behind us, especially in the face of turbulence. And your moral and financial support enabled us to weather the storm.’’

After he had patiently listened to the leader of his guests, the Alaafin returned their greetings and particularly commended the entourage for their efforts in preserving Yoruba culture outside their historical home.

Oba Adeyemi stressed the urgent need for world leaders to conserve international heritage of exceptional values, maintaining that Yoruba cultural value ranks among the best in the world.

Regrettably, he raised the alarm over what he called a threat posed to Yoruba culture by the West and two faiths imported into Yoruba nation.

‘’The guest faiths are therefore feeding on this to preach the gospel of individual prosperity and well-being on earth. They have abandoned the earlier gospel of earthly denials in order to enjoy heaven. By their new approach, they are misleading scores and scores of Africans, encouraging them to disrespect, dishonor and abandon anything African.

“African religious beliefs are demonised and discarded to the extent that some misguided Africans now abandon their family names in preference to names without bearing to their backgrounds. This danger is imminent and it is already destroying the African personality and confidence,” he declared.

Lamenting further, Oba Adeyemi said it is commonplace in Africa for practitioners of the African religion to be vilified, persecuted and blamed for the underdevelopment of their societies.

Specifically, he said hegemonic cultures of the French Policy of Assimilation aimed at destroying other cultures and superimpose their own cultures and values on subject peoples, in order to perpetuate the relationship of inequality and inequity.

“In spite of this suppression, Yoruba culture has demonstrated its resilience, spreading and attracting many studies across the world, and has been said to be the best studied African civilisation that has attracted the attention of the largest number of scholars, leading to the production of impressive number of publications.”

Oba Adeyemi, who praised Yoruba forefathers for not allowing detractors to steal the foundation of life or destroy the basis of existence as Yoruba race, urged them to continue to support the efforts of Yoruba sons and daughters at home and especially in the Diaspora in promoting and preserving salient aspects of their culture and the values inherent in them.

“Our religion is a cultural heritage of inestimable value. It defines us, provides understanding for our life and connects us with our past so that we can chart a course of greatness and development for our children. Leaders and people of Ajase land in Benin Republic are not only devoted, courageous but devotional in preserving the sacred intellectual property and the foundation of the Yoruba knowledge system, despite the orchestrated condemnation of its relevance by the western world,” he remarked.

It was a colourful event held under peaceful atmosphere with the Alaafin presenting locally made fabrics to the oba-elect.